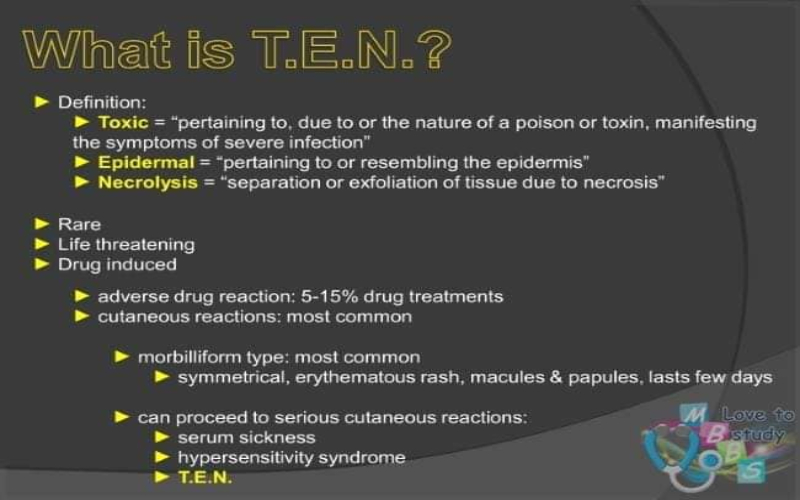 A year ago, 32-year-old Melissa Mok wasn't feeling well. She developed flu-like symptoms that quickly escalated into mysterious blisters that covered her entire body, head to toe, inside and out. Puzzled, Melissa's doctors placed her into quarantine while trying to figure out what was overtaking her otherwise healthy body.

It took several days, but Melissa was eventually diagnosed with Stevens-Johnson syndrome, an early stage of toxic epidermal necrolysis syndrome (TENS). Melissa was transferred to Sunnybrook, where she spent time in the intensive care unit and burn centre, unable to walk for weeks because of the blisters on her feet.

SJS, which is a milder form of TEN, are much more serious conditions, with both conditions leading to separation of the upper layer of skin involving the mucous membranes (mouth and lips) with formation of ulcers limiting a person’s ability to eat and drink, resulting in dehydration. Certain antibiotics including sulfonamides, penicillins, seizure medications such as phenobarbital and dilantin, as well as NSAIDS have been implicated in SJS and TEN. Underlying infection with Mycoplasma Pneumoniae, Epstein-Barr virus (EBV) as well herpes simplex have been implicated as potential causative agents as well.

For years, SJS was considered much more benign, probably in large part because of confusion with EMM. A recent cohort study that included 460 patients with EN observed an overall disease-related mortality of 30% at 90 days after onset. The death rates were 20%, 30%, and 50% for subgroups of SJS, overlap, and TEN, respectively.28 In addition to very high mortality, EN is the cause of nearly constant sequelae, occasionally progressing and often invalidating.

Stevens-Johnson Syndrome/Toxic Epidermal Necrolysis and Treatment With a Biologic: A Case Report

One of the most dangerous dermatologic emergencies is Stevens-Johnson Syndrome (SJS)/toxic epidermal necrolysis (TEN). Although a rare disease, it can often lead to significant mortality. We provide a brief review of SJS/TEN. Nonsteroidal anti-inflammatory drugs are a rare cause of SJS/TEN, and additionally, the use of biologics is a novel treatment modality for SJS/TEN.

Toxic epidermal necrolysis (TEN) and Stevens Johnson Syndrome (SJS) are severe adverse cutaneous drug reactions that predominantly involve the skin and mucous membranes. Both are rare, with TEN and SJS affecting approximately 1or 2/1,000,000 annually, and are considered medical emergencies as they are potentially fatal.

So what could cause this horrible disease? Dr. Shear says they are able to determine the cause in about seven out of 10 people, and he says it's usually one of a few well-known drugs that can trigger the problem.

To INFORM EVERYONE who takes ANY type of medication of the symptoms of Stevens-Johnson Syndrome, including TEN (Toxic epidermal necrolysis); offer information on what to do if you suspect that you, or someone you know, has either of these conditions.