Don't get me wrong. Antibiotics are great. But our use of antibiotics -- often overuse, misuse or unnecessary use -- has contributed to antibiotic resistance. It is a global public health emergency - Ranit Mishori MD 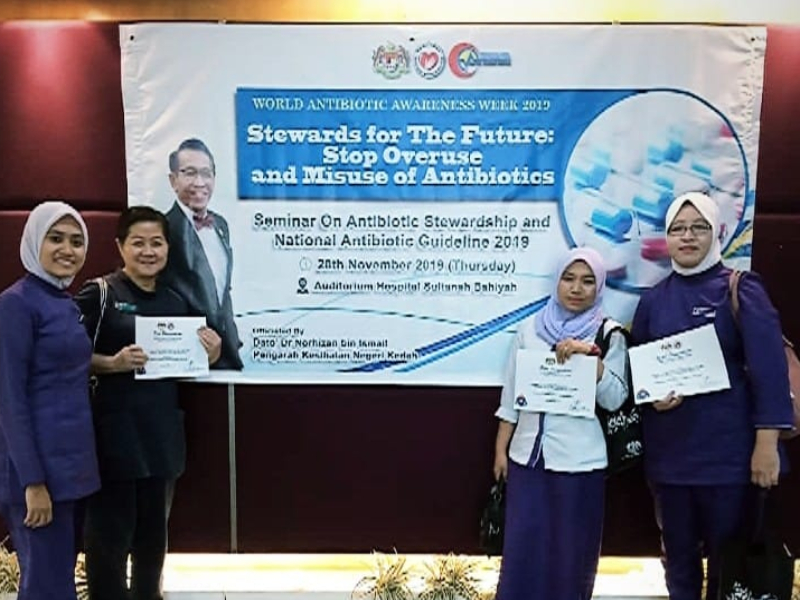 When Alexander Fleming accepted the 1945 Nobel Prize in Medicine for the discovery of penicillin and its medical uses, he warned the world about the long-term danger related to the improper use of antibiotics. “The time may come when penicillin can be bought by anyone in the shops,” he said. “Then there is the danger that the ignorant man may easily underdose himself and by exposing his microbes to non-lethal quantities of the drug make them resistant.”

Were Fleming alive today, he would be dismayed at how little his general warning was heeded and distressed…

25% of antibiotics prescribed in the US are unnecessary

Antibiotics aren’t pleasant—they can wipe out most of your gut bacteria, which can cause diarrhea. When you have a bacterial infection, these side effects are worth it to get better. Without one, though, taking antibiotics does more harm than good, both to you, and to public health more generally. Unnecessary antibiotics raise the risk for the development of drug-resistant bacteria, or superbugs. When antibiotics wipe out all other bacteria, those that are drug-resistant survive and are more likely to repopulate and spread their genes.

Problems of misuse, overuse, and diversion of prescription drugs are widespread across multiple therapeutic categories, including stimulants, analgesics, and antibiotics.In recent years, misuse of prescription antibiotics has become an area of public health concern given the lack of new medicines to treat increasingly drug-resistant bacterial infections.

Older Americans Are Awash in Antibiotics

The drugs are not just overprescribed. They often pose special risks to older patients, including tendon problems, nerve damage and mental health issues.

The Hidden Link Between Farm Antibiotics and Human Illness

What Are the Consequences of Antibiotic Overuse?

Evolution is helping bacteria bounce back.

Beekeepers often use antibiotics to treat their colonies for a condition called foulbrood, a bacterial infection capable of destroying an entire hive. In many cases—just like in humans—antibiotic treatments are great news for bees. But there’s not a lot of research into interactions between those antibiotics and the ‘good’ bacteria that live inside bees’ guts. So researchers decided to take a look.

Antibiotic overuse might be why so many people have allergies

Allergies are getting more and more common... This rise has mirrored the increased use of antibiotics, particularly in children for common viral infections such as colds and sore throats. Recent studies show that they may be connected.

CDC: Antibiotic Overuse Can Be Lethal

The overuse of antibiotics in U.S. hospitals is putting patients at risk and helping to fuel the creation of deadly superbugs, according to a government report released Tuesday. Prescribing practices vary widely, with doctors in some hospitals providing three times as many antibiotics for patients as physicians in other facilities treating similar types of patients, concluded the report, produced by the Centers for Disease Control and Prevention.

Excessive use of antibiotics in livestock is creating huge problems. Here’s how to fix it.

Gail Hansen of the Pew Antibiotic Resistance Project said she welcomes the new FDA regulations that will ban growth promotion. However, she warned that the regulations, which limit antibiotics to uses "necessary for assuring animal health," could leave the door open for antibiotics to still be used routinely for disease prevention, rather than treatment.

For the First Time, Antibiotic Use in Farm Animals Drops

Even with the decline in this year’s antibiotics sales, it’s worth keeping the larger context in mind. Between 2009, when the FDA first began tracking sales, and 2016, the overall change was actually a 9 percent increase. There is still a ways to go.

For the love of God, people, stop taking antibiotics for colds

For years, public health experts have been practically begging people to stop taking antibiotics for flu and the common cold. For one, the drugs don't help: Antibiotics treat bacterial infections. Colds and flu are caused by viruses. So taking antibiotics for these illnesses is an entirely futile and wasteful exercise. But even more importantly, the more we take antibiotics — particularly when they're not necessary — the more we increase the chances of helping develop antibiotic-resistant bacteria.

Overprescribing antibiotics to humans undoubtedly plays a role in the rising resistance of microbes. Cattle, swine, chickens and other livestock, however, receive the majority of the nation's antibiotics -- less often for the treatment of an animal's illness than to speed its growth or to prevent disease, which can be readily spread among industrially raised livestock kept in squalor.

How to Keep Doctors From Overprescribing Antibiotics

None of us wants to live in a world without access to lifesaving antibiotics. No patient should be subject to an allergic reaction or organ dysfunction from these drugs. No one wants to contract a potentially deadly form of diarrhea, claiming roughly 30,000 lives a year in the U.S., that can take hold after antibiotics wipe out healthy gut bacteria. Yet, every day, patients are prescribed antibiotics that they did not need or that are not clinically indicated, exposing them to the risk of these harms.

How to Stop Overprescribing Antibiotics

Clearly, we need to get doctors to prescribe antibiotics more selectively. But how can this be done? Several strategies have been tried in recent years, without much success.

New Push to Stop Overuse of Antibiotics in Nursing Homes

Up to 75% of prescriptions are incorrect as heath officials open a new front in war on overuse.

No Z-Pak for You!

Unless you absolutely need it. I've had this conversation hundreds, if not thousands, of times. It usually goes like this...

Not All Antibiotic Overuse Interventions Are Created Equal

Antibiotics are prescribed incorrectly about half of the time. They consume around one third of a hospital’s budget and their misuse is enormously costly as well, both in terms of promoting antibiotic resistance and in terms of side effects, such as drug rashes, superinfection with more resistant bacteria or fungi, or C. difficile colitis, a debilitating and sometimes life-threatening inflammation of the colon.

Overusing Antibiotics Could Cost the World Trillions of Dollars

The United Nations says antimicrobial resistance is already taking a toll on our health, and GDP.

Should Antibiotics Be Taken Preventively?

When I saw John's ziplock full of military-prescribed doxy, I wondered how many other soldiers were taking the same precautions.

We can win our battle against bacteria. Here’s how.

Taking Antibiotics off the Menu

Since they were first discovered in 1928 antibiotics have revolutionized modern medicine and saved millions of lives around the world. Unfortunately less than 100 years on, we are on the verge of what the World Health Organization has called a, “post-antibiotic era” - due to the misuse and overuse of these important drugs in humans and in livestock.

The Antibiotics Problem in Meat

A new study suggests that a consumer demand for chicken and pork in places like India, Russia, China, and Brazil will help drive a large increase in overuse of the drugs by 2030. Is there anything we can do about it?

The New Conundrum About When to Stop Antibiotics

Ending treatment earlier may help prevent dangerous antibiotic resistance, but it’s not the best course of action all the time.

Why doctors give out antibiotics you don't need.

Which fast-food chains served the meat and held the antibiotics?

Panera Bread and Chipotle Mexican Grill passed with flying colors, but KFC and Olive Garden were among the laggards in commitments to eliminate medically important antibiotics from their meat and poultry supply chains, according to a new report. Strong progress nonetheless was made across the top 25 fast-food and casual dining retailers, suggesting that public pressure has helped slow the meat and poultry industry’s routine use of antibiotics that are critical to human health,

Alliance to Save Our Antibiotics

The Alliance to Save Our Antibiotics is an alliance of health, medical, civil society and animal welfare groups campaigning to stop the overuse of antibiotics in animal farming. It was founded by Compassion in World Farming, the Soil Association and Sustain in 2009. Our vision is a world in which human and animal health and well-being are protected by food and farming systems that do not rely on routine antibiotic use.

Chain Reaction III is the third annual report and scorecard that grades America’s top restaurant chains on their policies and practices regarding antibiotics use and transparency in their meat and poultry supply chains.

We aspire to change behaviors across the globe that will maintain the effectiveness of antibiotics for future generations by increasing awareness of antimicrobial resistance via education, training, and partnerships.

Get Smart About Antibiotics Week is an annual one-week observance to raise awareness of the threat of antibiotic resistance and the importance of appropriate antibiotic prescribing and use.

Despite the Dangers, Big Ag Is Using More Animal Antibiotics Than Ever

Although there has been widespread panic about superbugs caused by the overuse of antibiotics in animal feed, sales for the drugs continue to climb.

While overuse of antibiotics by humans is an important part of this problem, we can't keep antibiotics working without changing the way we raise meat. It's time for the meat industry to clean up its act and commit to only using antibiotics to treat sick animals.