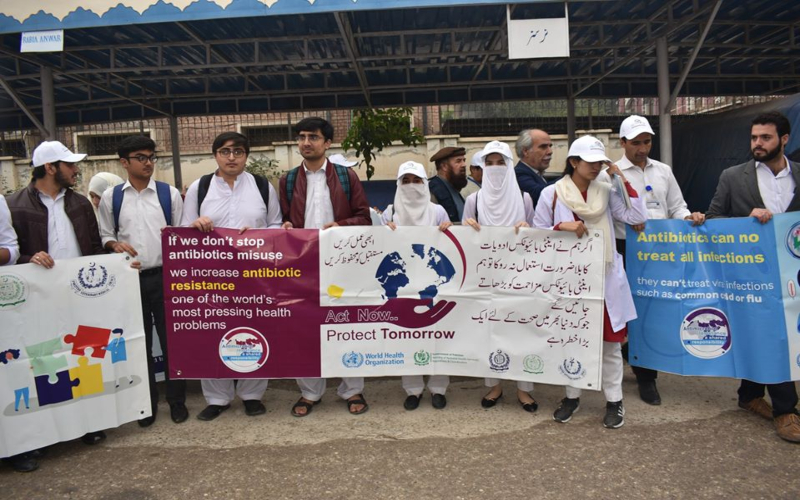 The problem with antibiotic resistance is a lot like the problem with climate change: It’s one of collective responsibility. At the individual level, what does it matter that one person drives a car, or takes an antibiotic it turns out he didn’t need? But everybody’s doing it. Just like our moms warned us, we’re jumping off a cliff with all our friends.

“[There’s a] lack of incentives that each of us has to really do the right thing,” said Ramanan Laxminarayan, the director of the Center for Disease Dynamics, Economics, and Policy, at the Aspen Ideas Festival’s Spotlight Health session. And when we don’t, “we’re just hosts for these bacteria to hop around.”

The overuse of antibiotics,…

A key tool in the race against drug resistance: vaccines

Drug resistance is one of the biggest threats to global health today. Vaccines can help.

How Dirt Could Save Humanity From an Infectious Apocalypse

One chemist thinks he’s found a way for us to outrun the lethal juggernaut of antibiotic resistance.

Our antibiotics are becoming useless

Already, 700,000 people around the world die of drug-resistant diseases each year, including 230,000 deaths from multidrug-resistant tuberculosis. Common problems like STDs and urinary tract infections are also becoming resistant to treatment. Routine hospital procedures like C-sections could become more dangerous as well as the risk associated with infection increases. Yet doctors, farmers, and others continue to dole out too many antibiotics, driving the resistance

The Hidden Link Between Farm Antibiotics and Human Illness

Now a new study, years in the making, goes further than any other to demonstrate that resistant bacteria can move from animals to humans via the meat they become. It also provides a model of how new surveillance systems might reduce that bacterial flow at its source on farms.

Culture of Secrecy Shields Hospitals With Outbreaks of Drug-Resistant Infections

The lack of transparency puts patients at risk, some say. Institutions say disclosure could scare some people away from seeking needed medical care.

Clinicians first started experimenting with phage therapy to treat bacterial infections as early as 1919, though it fell out of practice in the West after the widespread introduction of antibiotics. The therapy has remained in use in some countries in Eastern Europe and the former Soviet Union.

With a stroke of last-minute luck, scientists engineered bacteria-killing viruses to help an ailing girl recover from a deadly infection.

Meningitis, pneumonia, deadly diarrhea. Antibiotic developers have long struggled to treat such dreaded diseases because the bacteria that cause them have double cell walls with an outer membrane that is particularly difficult for drugs to penetrate. The only new products to fight such gram-negative bacteria in the past 50 years are variations on existing, already approved drugs. Yet resistance to those classes of compounds is soaring. Now, a team of scientists has created a compound that breaches these bacterial outer membranes in a novel way—and could one day save the lives of people infected with bacteria that today foil every gram-negative antibiotic on the market.

A new report says the overuse of antimicrobial drugs in humans, animals and plants is fueling resistant pathogens that could kill 10 million people annually by 2050.

Wait, There’s Hope! Here’s How Humans Might Save Antibiotics

Dozens of hospital networks, both giant and small, pledged to reduce the prescriptions they write in-house, to keep from encouraging resistance. Huge retailers committed to tracking animal antibiotic use; Walmart, for instance, agreed to set guidelines for the suppliers that funnel meat to its more than 5,000 stores. Pharmaceutical manufacturers including Merck, one of the few US-based companies still making antibiotics, laid out a plan to invest more in basic research on new compounds. Fifty-five pharma and biotech companies promised to develop better rapid tests, which prevent unnecessary prescriptions, including Accelerate Diagnostics, based in Arizona, which committed a $100 million program. Two manufacturers of veterinary vaccines announced they would educate veterinarians on alternatives to using antibiotics in farm animals.

We can win our battle against bacteria. Here’s how.

The Common Wisdom on Antibiotics Is Wrong

Taking your full course of antibiotics isn’t helping prevent the spread of resistance; it’s fueling it.

A Startup Takes On Antibiotic Resistance

Most of us in the developed world simply can’t imagine a life in which an endless array of infectious diseases runs unchecked, decimating life around them. We have taken this for granted because, well, we have taken antibiotics for granted. The problem is, we have used this form of chemotherapy so much (and with so little restriction) that it has led to pathogens that no longer yield to it. The reasons for this are lengthy and complex, and I won’t get into them here.

All you need to know about the 'Antibiotic Apocalypse'

The post-antibiotic era will be a frightening place to live – but there may be ways to avoid disaster.

Antibiotics have saved countless lives in the 88 years since penicillin was discovered, but the antibiotics we have aren't working as well as they once did — and if we don't act, the results could be disastrous, infectious disease experts say.

It costs nothing; it kills everything.

“We are seeing an increasing number of accounts of resistance to top-shelf antibiotics (like colistin and the carbapenem class), which are our last lines of defense against these bugs,” Keeve Nachman, an assistant professor at the Johns Hopkins Bloomberg School of Public Health in Baltimore, said in an email. “We are also learning more and more that some of the most worrisome genes that allow bacteria to resist our most powerful antibiotics are being exchanged more readily between different types of bacteria.”

Get ready for a future where antibiotics no longer work

Some pneumonia is becoming resistant to what's usually the last line of treatment available.

Get Your Children Good and Dirty

Researchers are discovering how crucial microbes are to our health and to avoiding a range of newly common diseases. So it’s time to get dirty, eat better and stop overusing antibiotics.

How scientists are preparing for a world without antibiotics

Each year, more than 23,000 people die in the United States as a direct result of bacterial infections that are resistant to antibiotics–the equivalent of a Boeing 747 crashing each week. And the same can be said for Europe, which estimates that 25,000 lives a year are lost to resistant bacteria.

The Plan to Avert Our Post-Antibiotic Apocalypse

A new report estimates that by 2050, drug-resistant infections will kill one person every three seconds, unless the world’s governments take drastic steps now.

The spread of superbugs

What can be done about the rising risk of antibiotic resistance?

The State of the World's Antibiotics, 2015

Latest global review on antibiotic use, resistance, and policies.

The World Is Not Prepared For Terrifying Superbugs

It’s more than resistant bacterial superbugs that should scare us. Only a few months after the Wellcome Trust's dire report on growing antibiotic resistance and the looming “post-antibiotic era,” a new report stresses that it is not just bacteria we need to worry about. Viruses and parasites are showing growing resistance to antimicrobials as well, and countries are ill-equipped to deal with this.

“If we keep going on like that, wasting our antibiotics on nonessential purposes, eventually nothing is going to work,” says Thomas Van Boeckel, an epidemiologist at the Institute of Integrative Biology in Zurich, Switzerland.

How can doctors, drug companies, and governments prevent a future where people die of minor infections?

Far from being someone else's problem, the release of a World Health Organisation (WHO) multi-country survey describes public awareness around antibiotic resistance, and highlights common misconceptions that are driving the current crisis. Here are seven of them.

Center for Innovative Phage Applications and Therapeutics We are the first dedicated phage therapy center in North America, bringing innovative research and clinical practice to the field of medicine. Join us on our journey and witness a revolutionary wave of solutions to combat antibiotic resistance.

Alliance to Save Our Antibiotics

The Alliance to Save Our Antibiotics is an alliance of health, medical, civil society and animal welfare groups campaigning to stop the overuse of antibiotics in animal farming. It was founded by Compassion in World Farming, the Soil Association and Sustain in 2009. Our vision is a world in which human and animal health and well-being are protected by food and farming systems that do not rely on routine antibiotic use.

The Antibiotic Resistance Action Center (ARAC) at the Milken Institute School of Public Health at George Washington University was created to preserve the effectiveness of antibiotics by engaging in research, advocacy, and science-based policy. ARAC is focused on finding out-of-the box solutions to antibiotic resistance, one of the greatest public health threats of our time.

We aspire to change behaviors across the globe that will maintain the effectiveness of antibiotics for future generations by increasing awareness of antimicrobial resistance via education, training, and partnerships.

Chain Reaction III is the third annual report and scorecard that grades America’s top restaurant chains on their policies and practices regarding antibiotics use and transparency in their meat and poultry supply chains.

Keep Antibiotics Working is a coalition of health, consumer, agricultural, environmental, humane and other advocacy groups dedicated to eliminating a major cause of antibiotic resistance: the inappropriate use of antibiotics in food animals.

Get Smart About Antibiotics Week is an annual one-week observance to raise awareness of the threat of antibiotic resistance and the importance of appropriate antibiotic prescribing and use.