Where in health am I? : Home / Health Cloud / Challenges / Drugs & Medications / Ozone Therapy

Freedom is the oxygen of the soul - Moshe Dayan 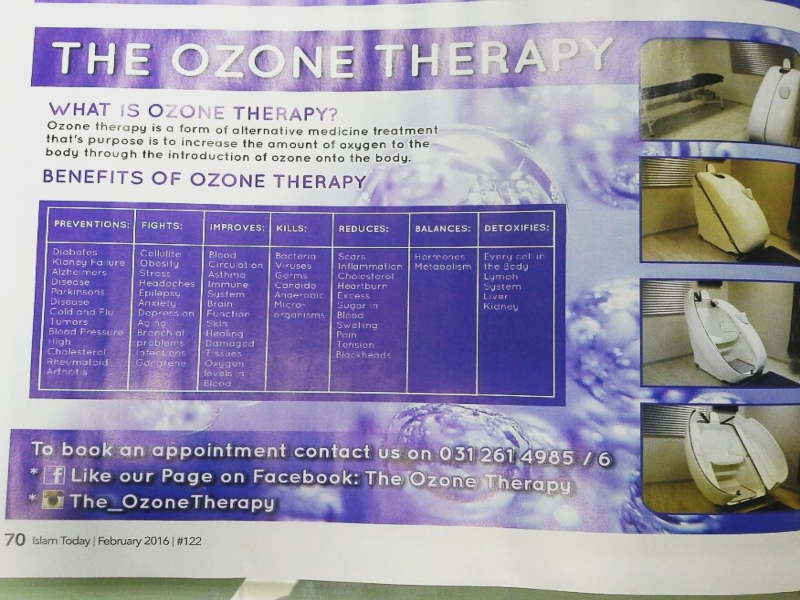 image by: The Ozone Therapy

Have you ever noticed the peculiar smell of a thunderstorm? The cause of that smell is ozone. Even though ozone was discovered a long time ago, in 1840, it remains the subject of multiple arguments and disagreements.

A layer of ozone gas around the earth protects us from ultraviolet radiation. We would be dead without ozone. On the other hand, ozone as a component of smog is damaging to humans’ lungs. So like most humans, it has some good and some bad qualities.

Even though ozone is not endorsed for medical use by any of the English-speaking medical societies or official agencies, many doctors in many countries believe it is beneficial.…

The only Ozone Therapy Magazine.

Naturopathic Medicine Week And The Problem Of Endemic Quackery, Like Ozone Therapy

Ozone therapy is one such case of unsafe quackery that is endorsed by the naturopathic profession. Naturopaths claim that ozone, a highly reactive gas, can be used to treat a plethora of serious medical conditions, including cancer, autoimmune disorders, cardiovascular disease, Alzheimer’s, diabetes and HIV infection. But ozone is extremely poisonous. It is an unstable molecule that reacts aggressively with biological compounds to form free radicals—the ultimate threat to health that alternative medicine zealots warn about.

Non-Medical Treatments: An Insight into the Practice of Ozone Therapy

The Ozone gas has 3 atoms of oxygen while the normal oxygen that we breathe has 2 atoms. The third atom of oxygen makes ozone highly oxidizing and supercharged and blesses it with all the remarkable medical properties that normal oxygen (i.e. O2) lacks.

Ozone therapy is growing in popularity around the world, despite being one of the most misunderstood therapies available. It is freely used and studied by medical societies in Austria, Italy, Germany, Switzerland and France, including the International Ozone Association, the Medical Society for Ozone Application, the Swiss Medical Society for Ozone and Oxygen Therapies, and the International Medical Ozone Society.

Medical O3 is used to disinfect and treat disease. Mechanism of actions is by inactivation of bacteria, viruses, fungi, yeast and protozoa, stimulation of oxygen metabolism, activation of the immune system.

Ozone has been used commercially for waste treatment and purification purposes because it disinfects almost everything it touches, but does it also help cure cancer and many other human ailments?

The Controversial World of Medical Ozone Therapy Use

Have you ever noticed the peculiar smell of a thunderstorm? The cause of that smell is ozone. Even though it was discovered a long time ago -- in 1840, it remains the subject of multiple arguments and disagreements. It protects us as an ozone layer around the Earth from ultraviolet radiation. We would be dead without ozone over there. On the other hand ozone as a component of smog is damaging to human's lungs. It is like people: there is no absolutely good or absolutely bad person. Each individual has his own good and bad features.

Bringing together scientists, engineers, systems designers, technologists, equipment manufacturers, and end users to share their experiences and research data on ozone and other related oxygen compounds.

Website of the Medical Society for Ozone application in Prevention and Therapy.

Society of Oxidative and Photonic Medicine

SOPMed is an organization dedicated to UNITING medical practitioners worldwide by TEACHING them to effectively administer oxidative and photonic therapies for the purpose of REACHING those who are suffering with medical relief.

Although used by an estimated ten million patients in Europe since the early 1960's, the therapeutic use of medical ozone and hydrogen peroxide (technically known as "bio-oxidative therapies") is largely a mystery to North Americans. Hailed as a safe, eff ective and low-cost treatment for a wide spectrum of diseases- including candida, cancer, heart problems and HIV- related infections- in Europe, proponents feel that they can go far in resolving America's health care crisis