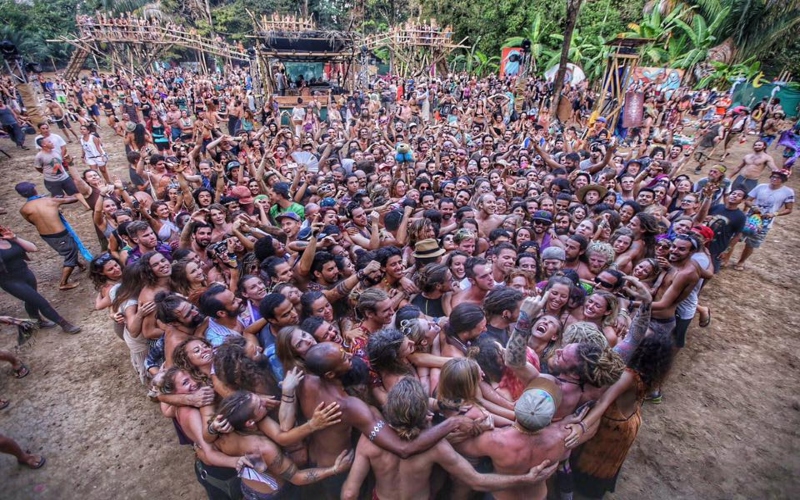 image by: The Society for Psychedelic Outreach, Reform, and Education

Psilocybin: A Journey Beyond the Fear of Death?

In one of the largest and most rigorous clinical investigations of psychedelic drugs to date, researchers at Johns Hopkins University and New York University have found that a single dose of psilocybin—the psychoactive compound in “magic” mushrooms—substantially diminished depression and anxiety in patients with advanced cancer.

Psychedelics were the subject of a flurry of serious medical research in the 1960s, when many scientists believed some of the mind-bending compounds held tremendous therapeutic promise for treating a number of conditions including severe mental health problems and alcohol addiction. But flamboyant Harvard psychology professor Timothy Leary—one of the top scientists…

The Denver measure is an indication of a shift in attitudes. It shows, Doblin says, “that people are having a more rational view about the actual risks” of psychedelics. It also proves, said Fluck, that there are “early adopters” of psilocybin decriminalization. And — Denver’s critical role in launching the legalization of cannabis has shown —“early adopters” are an essential component to any movement.

Indeed, magic mushrooms are having a therapeutic moment. In North America, at least four organizations, each with unique strategies, are working to expand access to psilocybin for anyone with mental health issues, dying or not.

Michael Pollan: Not So Fast on Psychedelic Mushrooms

Psilocybin has a lot of potential as medicine, but we don’t know enough about it yet to legalize it.

Researchers from Johns Hopkins University have recommended that psilocybin, the active compound in hallucinogenic mushrooms, be reclassified for medical use, potentially paving the way for the psychedelic drug to one day treat depression and anxiety and help people stop smoking.

The Dramatic Story of How Denver Decriminalized Mushrooms

With a little help from Joe Rogan and the youth vote, the almost unthinkable happened—and set the stage for reform nationwide.

The real promise of LSD, MDMA and mushrooms for medical science

Psychedelic science is making a comeback. Scientific publications, therapeutic breakthroughs and cultural endorsements suggest that the historical reputation of psychedelics — such as lysergic acid diethylamide (LSD), mescaline (from the peyote cactus) and psilocybin (mushrooms) — as dangerous or inherently risky have unfairly overshadowed a more optimistic interpretation.

"I felt as though I were communing directly with a plant for the first time."

The Essential Guide to Psilocybin Mushrooms

Psilocybin mushrooms (AKA magic mushrooms, or shrooms) is the name given to fungi that contain psilocybin, a naturally occurring psychedelic compound. There are more than 180 species of mushrooms that contain psilocybin, or its derivative psilocin. Psilocybin mushrooms have a long history of use in Mesoamerica in spiritual and religious rituals, and are currently one of the most popular recreational psychedelics in the United States and Europe.

A Dose of a Hallucinogen From a ‘Magic Mushroom,’ and Then Lasting Peace

Although cancer patients will not have access to therapeutically administered psilocybin anytime soon, the findings add vigor to applications to expand research in a multicenter trial with hundreds of participants.

A millionaire couple is threatening to create a magic mushroom monopoly

Scientific studies of psilocybin, the psychedelic compound in magic mushrooms, have been on the outskirts of serious medicine for decades. But a recent series of small studies has sparked a “psychedelic renaissance”: It seems the same psychedelic trips and loss of ego that made magic mushrooms a feature of ritual spiritual ceremonies for millenia also make them a promising treatment method for mental-health conditions such as addiction and post-traumatic stress disorder. These findings have laid the groundwork for larger, international studies that have the potential to lead to legal medicinal use of the drug.

Psychoactive mushrooms had been in a kind of scientific ghetto ever since they were criminalized in 1968. But now the drug derived from the mushroom, psilocybin, is finally being re-examined for its medical applications.

Hallucinogenic or 'magic' mushrooms may be prone to leading users through the doors of perception, but not those of the ER, according to researchers. Results from the 2017 Global Drug Survey suggest that so-called magic mushrooms, which contain the naturally occurring and hallucinogenic alkaloid psilocybin, are the safest recreational drugs being consumed based on user feedback and outcomes.

Hallucinogens may help people break free of destructive thoughts and addiction. Can a “mystical experience” be had legally?

Shrooms are the drugs that grow in the woods. But what's magic about these mushrooms? And what are the risks of taking them? And do they look like Toad from Mario, please?

Psychedelic Mushrooms And LSD Are Among The Safest Recreational Drugs, Survey Finds

If you’re looking to play it safe when it comes to illicit substances, look no further than the humble shroom. It’s non-addictive, hard to overdose on, and you can grow it yourself. And, according to a massive report by the Global Drug Survey, it sends the fewest people to the emergency room of any drug on the market. Take that, meth.

The Life-Changing Magic of Mushrooms

A single dose of magic mushrooms can make people with severe anxiety and depression better for months, according to a landmark pair of new studies.

The Life-Changing Magic of Mushrooms

A single dose of magic mushrooms can make people with severe anxiety and depression better for months, according to a landmark pair of new studies.

This Is Your Brain on Drugs

To the great surprise of many, psilocybin, a potent psychedelic, reduces brain activity.

What We Really Know About Psychedelic Mushrooms

Today, research on psychedelic drugs is experiencing a renaissance of sorts. A growing body of scientific studies from major universities and medical centers suggests that the substances may hold promise as therapeutic interventions for a number of mental health conditions.

‘Microdosers’ of LSD and magic mushrooms are wiser and more creative

No matter the substance, microdosing implies a dose so low that the individual experiences only subtle changes, not hallucinations. People are not “tripping” on a microdose; they just go about their regular day, whether that means studying at school, going to work or taking care of the kids at home.

Kathleen Conneally successfully quit smoking, after a decades-long habit, with the help of psilocybin. Conneally was a participant in a study at Johns Hopkins University looking at whether nicotine addiction could be treated by psilocybin, the active compound in magic mushrooms.

Psilocybin: A Journey Beyond the Fear of Death?

4 reasons you should eat more mushrooms

Even setting aside magic mushrooms, our favorite fungal fruiting bodies supposedly have some spectacular healing properties. Search for the health benefits of mushrooms and you’ll turn up pages of info about how they can treat or prevent everything from cancer to heart disease.

Our collective understanding of mental health is increasing all the time, with advances in neuroscience, psychotherapy, psychopharmacology and digital platforms.

We help spread accurate information about magic mushrooms so people can make informed decisions about what they put in their bodies.

We are a group of seven health professionals who seek to make psilocybin, a psychedelic medicine, legally available to Canadians in need of compassionate treatment for severe psychological distress.

We invite you to join us on this journey of discovery and pledge to do your best to move the community forward in a positive direction. To be contributors to our legacy. To promote knowledge and compassion to all.