Your first hit can be your last hit – Mcmullendusty 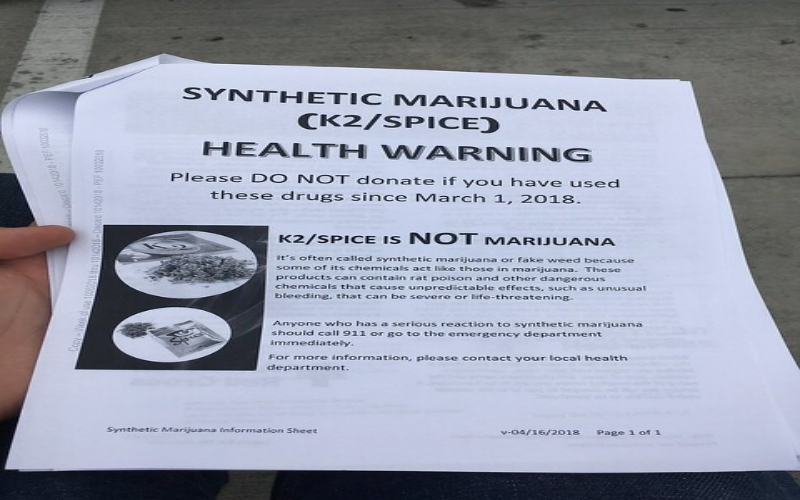 One of the original chemists who designed synthetic cannabis for research purposes, John W. Huffman, PhD once said that he couldn’t imagine why anyone would try it recreationally. Because of its deadly toxicity, he likened it to playing Russian roulette, and said that those who tried it must be “idiots.” Whether that’s the case or not, the numbers of users is certainly rising, and so are overdoses...

1. It’s much more efficient at binding and acting in the brain

One reason that synthetic cannabis can trigger everything from seizures to psychosis is how it acts in the brain. Like the active ingredient in pot, THC, synthetic cannabis binds the CB1 receptor. But when it binds, it acts as a full agonist, rather than a partial agonist, meaning that it can activate a CB1 receptor on a brain cell with maximum efficacy, rather than only partially, as with THC. “The first rule of toxicology is, the dose makes the poison,” says Jeff Lapoint, MD, an emergency room doctor and medical toxicologist. “I drink a cup of water, and I’m fine. I drink gallons of it in some college contest, and I could have a seizure and die. Synthetic cannabinoids are tailor-made to hit cannabinoid receptors – and hit it hard. This is NOT marijuana. Its action in the brain may be similar but the physical effect is so different.”

Another issue with synthetic is its potency, which huge. “Its potency can be up to one hundred or more times greater than THC – that’s how much drug it takes to produce an effect,” says Paul Prather, PhD, professor of pharmacology and toxicology at the at University of Arkansas for Medical Sciences. “So it takes much less of them to produce maximal effects in the brain. So these things have higher efficacy and potency…These things are clearly very different from THC and thus not surprising that their use may result in development of life-threatening adverse effects.”

2. CB1 receptors are EVERYWHERE in the brain

A central reason that synthetic cannabis can produce such an enormous variety of side effects is likely because CB1 receptors are present in just about every brain region there is. When you have a strong-binding and long-lasting compound going to lots of different areas of the brain, you’re going to get some very bad effects.

Yasmin Hurd, PhD, Professor of Psychiatry, Pharmacology and Systems Therapeutics, and Neuroscience at Mount Sinai Medical Center, says that the wide distribution of CB1 receptors in the brain is exactly why they’re so toxic. “Where they’re located is important – their presence in the hippocampus would be behind their memory effects; their presence in seizure initiation areas in the temporal cortex is why they lead to seizures. And in the prefrontal cortex, this is probably why you see stronger psychosis with synthetic cannabinoids.” The cardiac, respiratory, and gastrointestinal effects probably come from the CB1 receptors in the brain stem. It might be any one of these that produces the greatest risk of death.

The clearest proof that synthetic cannabis is a different thing all together is that overdose with the drug looks totally different from an “overdose” with natural marijuana. “Clinically, they just don’t look like people who smoke marijuana,” says Lewis Nelson, MD, at NYU’s Department of Emergency Medicine, Division of Medical Toxicology. “Pot users are usually interactive, mellow, funny. Everyone once in a while we see a bad trip with natural marijuana. But it goes away quickly. With people using synthetic, they look like people who are using amphetamines: they’re angry, sweaty, agitated.”

Whatever’s happening, he says, it may be more than just the replacement of THC with JWH. “It’s almost hard to imagine that it could be related to the partial vs. full agonist aspect of the drug.”

4. The body doesn’t know how to deactivate synthetic

One possibility is that the metabolites of synthetic cannabis are also doing damage to the brain. Usually our bodies deactivate a drug as it metabolizes it, but this may not be the case with synthetic. “What we’re finding from our research,” says Prather, “is that some of the metabolites of synthetic cannabis bind to the receptor just as well as the drug itself – this isn’t the case with THC. The synthetic metabolites seem to retain full activity relative to the parent compound. So the ability of our bodies to deactivate them may be decreased.”

He also points out that what’s lacking in synthetic cannabis is cannabidiol, which is present in natural marijuana and appears to blunt some of the adverse actions of the THC. But if it’s not there in synthetic cannabis, then this is one more way the drug’s toxicity may act unchecked.

Synthetic cannabis is made in underground labs, often in China, and probably elsewhere. The only consistent thing is that there’s no quality control in the formulation process. “Is Crazy Monkey today the same as Crazy Monkey tomorrow?” Prather asks. “No way. The makers take some random herb, and spray it with cannabinoid. They’re probably using some cheap sprayer to spray it by hand. How MUCH synthetic cannabis is in there? You have no idea how much you’re getting.” He adds that there are almost always “hot spots” present in the drug – places where the drug is way more concentrated than others. “Plus, there’s almost always more than one synthetic cannabinoid present in these things – usually four or five different ones.” The bottom line: There’s no telling what you’re getting in a bag of Spice or K-2.

6. The drugs are always evolving

“Someone’s just kind of riffing off JWH,” says Lapoint. There are hundreds of different forms of JWH, and of other synthetic cannabinoids designed by different labs, and the next one is always waiting to go. “It only takes a grad school chemist level to pull it off,” he says. “The first JWH in incense blends was found in Germany around 2008 – it was the JWH-018 in Spice. It took months for the local authorities to figure out what was in it and regulate it. The next week incense blends with another compound, JWH-073, came out. They already had it ready to go – and they’re making something that’s not even illegal yet. Since we started the conversation 10 minutes ago, we’re already behind.”

The demand for a “legal high” has been so great in recent history that it’s set the stage for the synthetic market to take off, says Lapoint. “It’s like the perfect storm. First we created black market by making marijuana illegal. Then there are all these loopholes in the legislation, so you can feed synthetics through when you change one molecule and call it a different drug.” As mentioned, it takes so long for the FDA to catch up – a year or more – that by the time one drug is made illegal, dozens of other iterations of the synthetic are already formulated and poised for release into the market.

His solution is a three-pronged: Changing the laws, by moving form a rule-based to a standards-based system, is the first step. “Right now, you either apply analog act to a new drug or make a new law. There will always be a loophole. So you have to move to standards-base. We really need good designer drug legislation reform.”

The second step is that get the public health message across that synthetic cannabinoids can kill. “Science has a poor understanding of how these drugs will effect you,” says Lapoint, “and the public has an even poorer understanding. People think ‘oh it’s just weed, just fake marijuana.’ Clearly the safety perception is way off. Let parents know, let kids know – this is not the same thing. You are experimenting with unknown compounds. You’re being a guinea pig. It’s not the same chemical, even among same brand. Medically, these drugs are a world of difference from THC.”

The last step, he says, is to continue the legalization discussion. Some states are leading the way. “You have to ask if you’re pushing people towards the scarier thing? The answer is ‘yes.’ It’s like prohibition where people made bathtub gin with methanol. We know people are going to use it. No athlete, soldier, student, or parolee wants to test positive for THC. So they just go to the head shop and get the ‘legal’ kind.”

Of course, it’s not legal at all, and it can lead to irreversible health problems and death. Whether legalization of natural marijuana is the solution isn’t totally clear. But remind your friends or kids that being a human subject in an uncontrolled synthetic drug experiment is just stupid. “This was never intended to be used in people,” says Lapoint. “It even says on the label, ‘Not for human consumption.’ Ironically, that’s the only accurate thing on the label. This is not marijuana. It should not be thought of like marijuana. We have to get this out there: Its effects are serious. It’s a totally different drug.

Source: Alice G Walton, Excerpt from Why Synthetic Marijuana Is More Toxic To The Brain Than Pot, Forbes, August 28, 2014.

Synthetic Cannabinoids: They're Not Marijuana

Sold under a variety of monikers, most commonly spice and K2, synthetic cannabinoids, while analogues of tetrahydrocannabinol, otherwise known as THC, are hardly natural substances. First used in Europe, its use has skyrocketed in the United States over the past 10 years, and it has been associated with increasingly severe side effects and even death.

What is Spice and why is the drug so dangerous?

Synthetic cannabis, of which Spice is an example, is linked to serious health issues ranging from difficulties breathing to psychotic episodes. But, despite well-known issues, these drugs are still in demand and homeless people, particularly, are at risk of mental health issues from their use. So what exactly are these drugs made of and why do they cause such violent reactions.

Hospitalizations in the UK from taking synthetic cannabinoids could be avoided through implementing a strict regulatory model for drugs. Instead, the government is pushing ahead with a blanket ban of these and similar substances that will only increase their dangers.

Cheap, unpredictable and hard to regulate, synthetic marijuana has emergency responders scrambling to save lives.

It's hard to guess what will happen after you smoke or ingest spike, users and drug enforcement officials say, because the chemists who make it are constantly changing the main ingredients — tweaking a cannabinoid's chemical structure, or mixing it with other substances entirely, which can change its effects.

K2 — the street name for plant matter sprayed with synthetic chemicals, designed to mimic the effects of marijuana's active ingredient — is currently America's cheapest way to get high. The drug is often sold at corner stores, labeled as potpourri and unfit for human consumption. A bag of K2 sells for $5 to $10, while a joint goes for just $1. But the drug's dangerous side effects have taken a toll on a wide variety of communities across the country, particularly in New York City.

The Dangers of the Street Drug K2

A study reveals just how harmful cannabis substitutes can be. But despite a string of high-profile deaths linked to the drug, feds have found it a slippery target to crack down on.

Why Synthetic Marijuana Is More Toxic To The Brain Than Pot

Why are the effects of synthetic cannabis so varied and so toxic? Researchers are starting to understand more about the drugs, and finding that synthetic cannabis is not even close to being the same drug as pot. Its name, which is utterly misleading, is where the similarity ends.

My number one goal with this site is to help inform people about the dangers of Spice – especially its addictive nature.