Where in health am I? : Home / Health Cloud / Challenges / Drugs & Medications / Right to Try

It doesn’t matter if you’re male, female, old, young, conservative, liberal. None of those categories apply to terminal diseases. The best of the human spirit wants to solve this problem and people work together to make that happen - Sandy Walsh 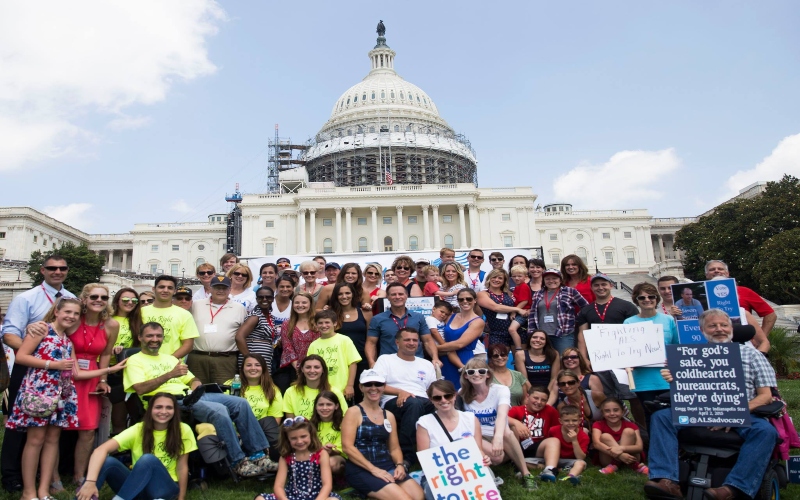 image by: My Right To Try Now

8 Things to Know About the "Right to Try" Law

The Right to Try Bill or Act became law on May 30, 2018. It provides a way for people with life-threatening conditions to access investigational treatments. This includes drugs and biologics in clinical trials before they have received FDA (Food and Drug Administration) approval. The law gives terminally ill people the chance to try treatments that could save their lives. As with anything, there are benefits and drawbacks. It’s important to discuss Right to Try pros and cons with your doctor before making treatment decisions. Here are key points to know about the Right to Try law.

1. You have to be eligible.

In order to use the Right to Try law, you have to…

The ‘Right to Try’ Law Says Yes, the Drug Company Says No

Parents racing to treat their ailing toddler find a drug company still has final say over who gets to try experimental treatments sooner.

‘Right-to-try’ laws provide little access to investigational drugs. We created a process that does

Hype quickly met reality in the right-to-try world. State and federal legislation targets the FDA as the key obstacle in giving the dying quicker access to unapproved drugs. That is simply ridiculous. The FDA does not make or control access to unapproved drugs. Those drugs are the property of the drugs’ sponsors: companies and academic institutions and their investors. The FDA can’t make them give anything to anyone.

A year after Trump touted ‘right to try,’ patients still aren’t getting treatment

For Frank Mongiello, Jan. 30, 2018 was a day of hope. After dedicating the last few years of his life to the “right-to-try” movement, an effort to get dying patients access to experimental treatments...

Assessment of the Right-to-Try Law: The Pros and the Cons

we weigh the pros and cons of the federal Right-To-Try law.

Federal “right-to-try” over a year later: Still a failure and still about the money (and weakening the FDA)

Federal “right-to-try” legislation was passed and signed into law by President Trump over a year ago. Advocates promised that lots of terminally ill people who were dying then would be saved by having the right to “try” experimental therapies outside of the context of clinical trials. That has not happened. This should come as no surprise, because right-to-try was never about getting experimental drugs to dying patients. It was always about weakening the FDA and making money.

Giving patients the ‘right to try’ experimental drugs is a political maneuver, not a lifesaver

The right to try legislation will score the president and members on both sides of the aisle in Congress points, but ultimately it will change little for terminally ill patients and their families.

Patients Demand The 'Right To Try' Experimental Drugs, But Costs Can Be Steep

Such laws sound compassionate, but medical ethicists warn they pose worrisome risks to the health and finances of vulnerable patients.

Right to Try Act: Is it the Answer for Terminally Ill Patients?

The Right to Try Act of 2018 innovates on the existing legislation but leaves more to be desired. It streamlines the process by which terminally ill patients can obtain investigational drugs, essentially by cutting out FDA reviewers. Although this does improve speed, many other factors delay the time it takes for a patient to obtain a potentially lifesaving drug. The RTA is a step in the right direction for patient autonomy and treatment, but has some extensive issues that need to be addressed going forward.

Right To Try: A Healthcare Reform That Can Save Lives

No longer will these patients have to beg the federal government for permission to try to save their own lives. Even former FDA Commissioner Dr. Andrew von Eschenbach has urged the FDA to develop programs that give patients the right to make these decisions. Tens of thousands of Americans’ lives are destroyed every year by incurable illnesses, but that doesn’t mean we can’t help them.

Right-to-Try Is Just What the Doctor Ordered

The author of the right-to-try concept, the libertarian Goldwater Institute, has been lobbying since 2014 for right-to-try laws, initially state by state and now on the federal level. These laws remove the FDA from decisions about which experimental drugs can be tried by dying patients unable to enroll in clinical trials. Right-to-try advocates seek unfettered freedom for patients to try whatever experimental drugs they can obtain. However, because these laws don’t force pharmaceutical companies to provide experimental treatments or insurers to pay for this care, the only entity these laws affect is the FDA.

The Disingenuousness of ‘Right to Try’

The new law has a catchy name, but it will only make it more difficult to know if medication is effective or safe.

The Realities of “Right to Try”

By participating in ‘Right to Try’, [a patient who is ineligible for a clinical trial] would derive the same potential benefit as someone enrolled in a phase II trial - Rafael Fonseca.

President Trump claimed that a new law allowing access to experimental drugs would save “hundreds of thousands” of lives. But there is already a federal program in place, and similar state laws have had a minimal effect.

“Right-to-try,” the controversial plan to help the terminally ill that just passed the House, explained

Experts worry the legislation is unnecessary and carries more risk than reward.

8 Things to Know About the "Right to Try" Law

As with anything, there are benefits and drawbacks. It’s important to discuss Right to Try pros and cons with your doctor before making treatment decisions. Here are key points to know about the Right to Try law.

25,450 Americans will die this year waiting for cancer drugs that could treat them

When you have a terminal illness and all else has failed, shouldn’t you be free to enrol in a medical trial of a promising new drug? This isn’t a distant hypothetical, but a serious predicament that faces thousands of Americans every year.

Right to Try helps terminal patients get the potentially life-saving medicines they need before it's too late.

The Right to Try bill creates a program that is not as good as the existing FDA “Expanded Access” program, which has approved 99% of requests they received.

Although 41 states have passed Right to Try laws, the signing of S.204 makes Right to Try the law of the land, creating a uniform system for terminal patients seeking access to investigational treatments.

The Right to Try Act, or the Trickett Wendler, Frank Mongiello, Jordan McLinn, and Matthew Bellina Right to Try Act, was signed into law May 30, 2018. This law is another way for patients who have been diagnosed with life-threatening diseases or conditions who have tried all approved treatment options and who are unable to participate in a clinical trial to access certain unapproved treatments.