It’s one of the first things prohibitionists and reformers agree on about NPS: These drugs are just not that great - Stefanie Jones 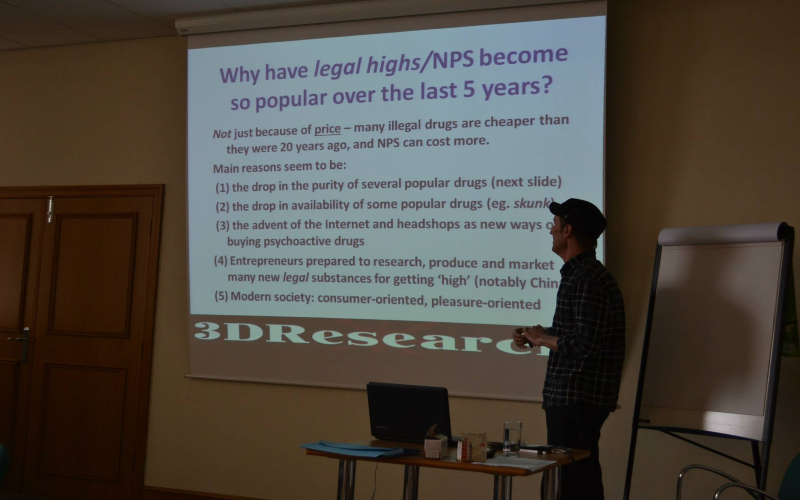 These Lousy Drugs Are Going to End the Drug War

It’s a rare day when the prohibitionist establishment and die-hard drug policy reformers are in agreement — but that happens to be the case more often than not when it comes to what the U.S. insists on calling “synthetic drugs.” Known more properly around the world as NPS (novel psychoactive substances), this group of newly created or rediscovered drugs may very well, both groups believe, signal the death of the modern drug war.

Which is ironic, given the modern drug war created them.

Although the precise timeline is debatable, NPS — including substances with names like K2, Spice, mephedrone, “flakka” and 25i-nBOMe—only…

Pharmacists should be aware of the rapidly expanding illicit drug market and how they can play a role in reducing harm from popular novel psychoactive substances.

There's A 'Legal High' You Can Buy Online, And It Isn't Cannabis

"It's astonishing that only two species of plants, separated by 300 million years of evolution, produce psychoactive cannabinoids," said Gertsch in a press release. And it turns out that the Maori people, indigenous to New Zealand, have utilized the liverwort plant for centuries as a traditional medicine for treating abnormalities of the liver or digestive issues...

The next generation of illegally synthesized and distributed drugs with powerful effects on the human mind (and body) is in the pipeline. New production of synthetics has ratcheted up to replace last year’s drugs, in response to public health bans and criminal consequences.

Designer drugs are being tweaked, multiplied, and injected into the internet's one-stop pharmacies so furiously that authorities are scrambling to rejigger existing global drug laws that just can't keep up with today's synthetic speed.

The world is getting high on synthetic drugs like meow-meow, spice and V8

The world is awash in synthetic recreational drugs—the ones that are made in a lab, not grown in a field or a greenhouse—thanks to their growing popularity in China, strong demand in the US, and tiny labs in countries like Mexico and Thailand that are distributing them around the world. Methamphetamine is by far the most common synthetic, but a confounding new class of drugs is growing at what the United Nations calls an “unprecedented pace”...

What is Spice and why is the drug so dangerous?

Synthetic cannabis, of which Spice is an example, is linked to serious health issues ranging from difficulties breathing to psychotic episodes. But, despite well-known issues, these drugs are still in demand and homeless people, particularly, are at risk of mental health issues from their use. So what exactly are these drugs made of and why do they cause such violent reactions.

The number of deaths caused by a group of mind altering drugs, including mephedrone, has increased over the past three years. And while toxicology reports also link the use of these substances to deaths from other causes, the speed at which new substances are created is making it difficult for authorities to keep up.

These Lousy Drugs Are Going to End the Drug War

It’s a rare day when the prohibitionist establishment and die-hard drug policy reformers are in agreement — but that happens to be the case more often than not when it comes to what the U.S. insists on calling “synthetic drugs.” Known more properly around the world as NPS (novel psychoactive substances), this group of newly created or rediscovered drugs may very well, both groups believe, signal the death of the modern drug war.

Novel Synthetic Opioids (NSO) are a class of Novel Psychoactive Substances (NPS) that mimic morphine and heroin but, in contrast to them, may be fully effective by the intranasal and oral route and many times more potent than morphine in producing acute toxicity.

Legal Highs’ are substances which produce the same, or similar effects, to drugs such as cocaine and ecstasy, but are not controlled under the Misuse of Drugs Act.

The creation of new substances to exploit loopholes in drug control legislation has been a problem since the international drug control system was first established. The proliferation of such substances in recent decades was influenced by the work done by Ann and Alexander Shulgin on phenethylamines8 and tryptamines9 in the 1960s and the 1970s. The Shulgins reported over 230 psychoactive compounds that they had synthesized and evaluated for their psychedelic and entactogenic potential. More recently, a number of piperazines, synthetic cathinones and synthetic cannabinoids emerged, which were marketed as 'legal' alternatives to controlled substances.

The number of easily accessible and legally ambiguous Novel Psychoactive Substances (NPS) is increasing, and the market for such drugs is assumed to keep growing.