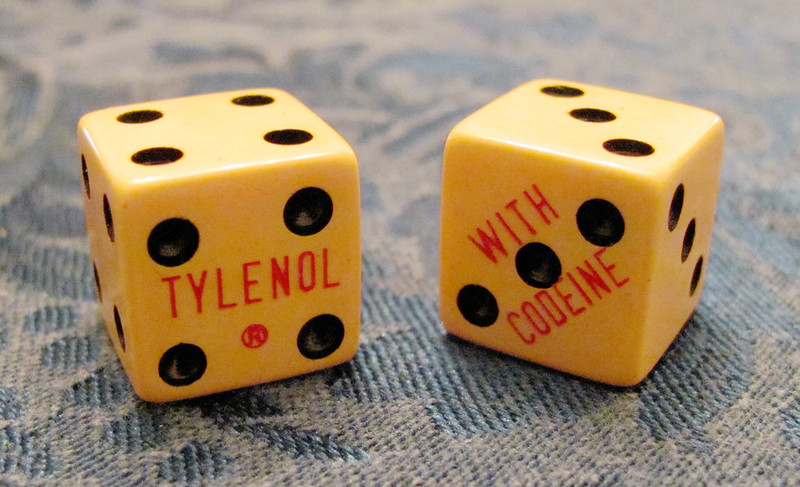 As opiate addiction continues to grip the United States – killing more than 100 people per day in 2016 – researchers are trying to get a handle on the scale of the problem in Europe.

The US is grappling with a major crisis driven by dependency on opioid painkillers such as fentanyl. These highly addictive prescription drugs are chemical cousins of heroin, morphine and methadone.

Strong opiates are tightly controlled in Europe but several EU countries allow over-the-counter sales of a milder pain medication: codeine. While less dangerous than heroin or fentanyl, codeine is turned into morphine in the liver and can still be toxic in high doses.

'It's a hidden addiction,' said Dr. Michael Bergin of Waterford Institute of Technology, Ireland. 'Codeine abuse affects people with diverse profiles, from children to older people across all social classes.'

Some are children who got hooked on cough medicine that contains codeine – although these products are not recommend for children. Others are heroin and morphine addicts who use codeine as an occasional substitute for harder opiates.

'But we have also identified middle-aged respectable women who became addicted to codeine having used it for pain relief or, in some cases, anxiety,' Dr. Bergin explained.

Globally, demand for codeine is high and rising – up by approximately 27% over the last decade, although precise data on codeine use is hard to come by. Information on sales is deemed by companies to be commercially sensitive and, as the painkiller is often paid for directly by consumers rather than reimbursed by a medicines payment scheme, there is no central database tracking how many people are using it, nor how much they are buying.

One project, CODEMISUSED, set out to understand how widespread codeine abuse is by interviewing users, pharmacists and doctors. It found that access to the drug varies widelyacross Europe, with pharmacists in some countries requiring a doctor's prescription before they can dispense it.

In other jurisdictions, codeine is sold on demand. Several countries allow over-the-counter sales but apply limits to how much can be purchased and provide pharmacists with guidelines on how to limit abuse. Online sales have also grown strongly, according to researchers, with patients obtaining the drug without needing to engage with health professionals at all.

An online survey of 450 codeine users found high levels of craving among regular users. The research, conducted by King's College London, UK, and Waterford Institute of Technology, found 20% of respondents were dependent on codeine.

In-depth interviews by the Waterford-based research team found codeine addicts sometimes combine the drug with alcohol and other drugs. Users said they turn to over-the-counter codeine at the first sign of pain, anxiety or stress, some referring to it as 'my helper' and 'companion'. However, several interviewees were surprised to learn that a relatively accessible product was addictive and a member of the opiate family.

For community pharmacists, codeine abuse is a real challenge. The drug has legitimate uses, making it difficult to refuse a customer who may be taking codeine appropriately. 'Codeine addicts speak about what they call pharmacy hopping or pharmacy tourism,' said Dr. Bergin. 'They would go from one pharmacy to another, sometimes buying 40 or 50 boxes in a single day.'

Dr. Pádraig McGuinness, superintendent pharmacist of the CARA Pharmacy group, who worked with CODEMISUSED, said a brief intervention – warning the patient of the risks of opiate addiction – can be more effective than flatly refusing to sell it. 'The customer may simply go down the street or to a different town with a different story,' he said.

One solution examined by the project could be to implement an online tracking system similar to one introduced in South Africa, which allows pharmacists to share data on codeine purchasers and cap sales to any individual at 4 grams per month.

CODEMISUSED, which finished last year, published an extensive review of best practices and innovative approaches to balancing access to codeine with reducing the risk of addiction. These include manufacturing formulations of codeine that are less easily converted to the stronger opioid injectable deso-morphine, public information campaigns, tighter surveillance of codeine sales, training for pharmacists to help them identify codeine dependency, and responsible prescribing practices where prescriptions are required.

Doctors also play a crucial role in recommending codeine and in identifying dependency. As health professionals with long-standing relationships with patients, they are well-placed to tackle addiction but are also in the difficult position of having to refuse or moderate the use of painkillers for people in their own community.

Better training could help them play a more decisive role. A survey of almost 400 medical professionals carried out by CODEMISUSED found that 77% of doctors routinely reviewed patients prescribed codeine, but only 21% said they were confident in identifying codeine dependence. Three-quarters said more instruction on alternative pain management options would be valuable.

The role of educating general practitioners (GPs) in managing addiction is the focus of a separate project, BEAMED. Through a collaboration between Ireland and Canada, researchers are testing a specialised training programme used in Canada in a European context.

'Improving the identification and treatment of addiction-related issues through education and training is a global challenge. The lessons from this programme (in Canada) will be examined to inform future developments in the EU.'

Across Europe, family doctors have a growing role in addiction, ranging from the provision of methadone for opioid users to managing other addictions such as alcohol and nicotine.

The British Columbia Centre on Substance Use has developed an addiction medicine fellowship which equips health professionals to lead state-of-the-art addiction services. By borrowing from this model, services in Ireland and other EU countries can be improved, according to Dr. Jan Klimas who works at the University of British Columbia in Canada and UCD.

'By applying proper training, evidence-based tools and resources, the pool of addiction specialists will increase,' he said. 'This will help to identify drug use earlier, preventing its escalation to substance use disorders and reducing the number of patients in need of treatment.'

Here’s what happened when codeine was made prescription only. No, the sky didn’t fall in

When codeine became a prescription only drug in 2018, the number of overdoses dropped, our new research shows. But restricting sales of codeine is only one way to reduce harm from opioids.

An Opioid Addiction, and an Australian’s Battle to Survive

On the opposite end of the earth from America, where the opioid epidemic has left 400,000 dead, Australia is facing its own crisis of soaring opioid use and fatal overdoses. It has all unfolded despite the glaring warnings from the U.S., and despite more than a decade of warnings from Australian health professionals about a looming disaster.

Prescribed or purchased over the counter, the painkiller is dangerously addictive when misused – and experts believe we have a growing problem.

Codeine: Time to Say “No”

The evidence linking the use of codeine with life-threatening or fatal respiratory depression is based on a series of case reports that have appeared in the literature regularly since 2004.

Kiwis are chugging back millions of over-the-counter codeine pills, figures obtained by Stuff reveal. But moves by Medsafe to make the products prescription-only to bring us in line with Australia remain mired in red tape.

The opioid crisis and why Australia is cracking down on codeine

Move aims to arrest Australia’s growing opioid crisis but there are fears it will push people towards illicit products.

The Real Dangers Of Codeine

Not many people know that Codeine is made from Opium the same plant that Heroin and Morphine are made from.

Zimbabwe is at risk of losing its youth to codeine cough syrup, as the addiction epidemic has already engulfed what the experts estimate could be over half the country’s young people. Despite the growing problem, Zimbabwe’s government has not yet opened rehabilitation clinics, meaning addicts are often sent to prison...

Three claims used to justify pulling codeine from sale without a prescription, and why they’re wrong

From February 1, 2018 all products that contain codeine will only be available for sale in pharmacies with a prescription. This means you won’t be able to buy brands like Nurofen Plus, Panadeine or Panadeine Extra over the counter at your local pharmacy without a prescription from your doctor. The decision was made by Australia’s drug regulator the Therapeutic Goods Administration (TGA). It was based mainly on the fact that codeine can cause dependence, and its misuse has led to addiction and even death. These facts are not in dispute.

Australia has become the latest country to ban over-the-counter sales of medications containing the opioid painkiller codeine. The new regulation, which will come into effect on 1 February 2018, is hoped to halt the rise in codeine-related deaths, which have more than doubled in Australia since 2000.

I have been addicted to codeine phosphate for three years. It started after completing my MSc course at a world renowned university. I felt like I was on top of my game.

Because codeine is available without prescription, people regard it as something that is not too drastic and that is why I have written papers on it — not to scare-monger, but to open people’s eyes to the potential dangers of codeine.

Doctors Are Still Prescribing Codeine For Kids After Tonsillectomies, Despite FDA Warning

And therein lies the danger: the variable metabolism of the drug itself, and its ability to induce variable levels of morphine in the bloodstream place all children at risk--but even more so in children with sleep apnea. Children with this condition develop more respiratory depression when they receive codeine, leading to a higher risk of death.

How to Drink Your Lean With Slomocup

I'd gotten interested in lean, aka sizzurp, otherwise known as purple drank, which is a way of consuming a prescription-strength cough syrup that contains codeine and promethazine. This method of getting high off cough syrup dates back to the 1960s blues scene in Houston, Texas, when musicians would mix Robitussin and beer.

Despite the evidence that the powerful narcotic codeine doesn’t work—and could be fatal—in children, doctors are prescribing the painkiller to hundreds of thousands of children in emergency rooms each year

New rules will restrict access to some codeine-based cough syrups because their narcotic ingredient makes them addictive and subject to robberies and abuse. Cough syrups like Dimetapp-C, Robitussin AC and acetaminophen with codeine are sedating pain relievers that have been marketed for many decades.

Why making codeine products prescription-only is a good idea

Currently, lower-strength painkillers such as paracetamol, ibuprofen and aspirin can be bought almost anywhere, while drugs such as Nurofen Plus or Panadeine Forte can be bought only at pharmacies. These combine codeine with paracetamol or ibuprofen in order to tackle more severe pain. These drugs may soon join the next, stronger level of painkillers, which require a doctor’s prescription because they pose an increased risk of side effects or addiction.

Strong opiates are tightly controlled in Europe but several EU countries allow over-the-counter sales of a milder pain medication: codeine. While less dangerous than heroin or fentanyl, codeine is turned into morphine in the liver and can still be toxic in high doses.