At least with heroin, there is a chance that if someone relapses, they can get back into recovery, but with fentanyl it is only a matter of moments before an addict can be dead - Joanne Peterson 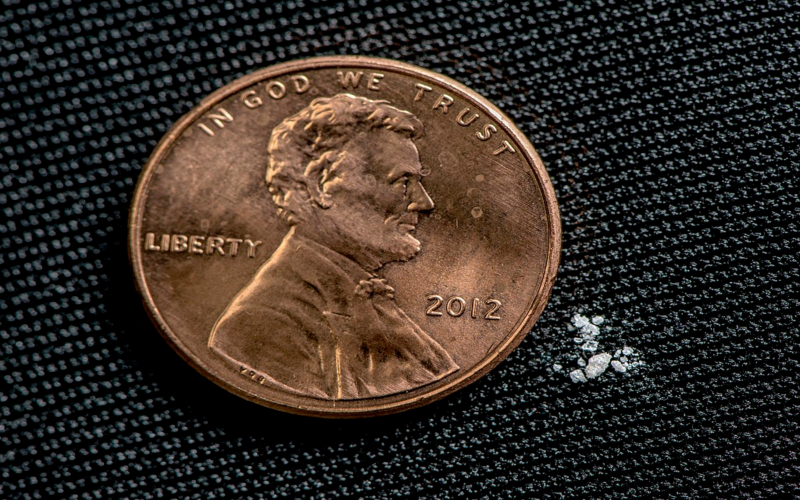 image by: US Drug Enforcement Administration

Fentanyl is a potent painkiller originally synthesized in the 1960s as part of a class of novel opioids. At first, fentanyl was used only in surgery, but when new forms of administering it were developed decades later, including skin-patches and under the tongue sprays, it quickly became one of the most common treatments for chronic pain and palliative care.

Recent media coverage claims fentanyl is ‘50 times stronger than’ heroin and ‘100 times stronger than’ morphine and is an ‘instant killer.’ It is true that fentanyl is more potent than heroin and morphine, but this simply means that it is active at lower doses. Words are important here — while chemists and pharmacologists can weigh a drugs’ potency by the amount it takes to produce effects, this can be a distraction to what the real issues are with fentanyl and why people are dying from it.

Why do people take fentanyl?

Meeting the need for relief in chronic pain patients is a legitimate medical practice, and when patients on painkillers long-term develop tolerance to their medication, stronger and more effective drugs are often needed. This need is sometimes challenged when attention is brought to problems associated with the illicit use of prescription medication, but when access to painkillers is restricted, patients often resort to the illicit market.

Why are people dying from fentanyl and what can we do about it?

People who use fentanyl often don’t know they’re taking it. In general, fentanyl used to cut heroin is not being diverted from medical facilities but comes from clandestine labs often in other countries, synthesizing large quantities of cheap, pure fentanyl. Fentanyl has become an attractive cutting agent, since its increased sedative potency can be perceived as strengthening a batch of heroin. Therefore risk of fentanyl overdose is particularly greater for opiate-naïve users, and even in those with a tolerance for heroin.

While synthetic opioids are invaluable to medicine, our failed drug prohibition policy is actually creating the scenario where cutting heroin with fentanyl makes sense to sellers because there is a demand for a cheap and strong high.

What’s a better approach to fentanyl?

A law enforcement crackdown on fentanyl and restricting doctors’ prescribing ability to treat legitimate pain patients has been tried already, and it only makes things worse. Proposed solutions that can prevent deaths and create a safer environment for opioid users, like expanding access to the overdose antidote naloxone and creating supervised injection facilities, are necessary.

The harms associated with drug use, including fatal overdoses from opioids, need to acknowledge the role of stigma surrounding people who use them. Prince was known as an advocate for clean living, and if fear of being stigmatized as a drug addict was a contributing factor to his untimely death, just like it is for many others, serious consideration needs to include an end to the stigma around drug use.

Source: Kevin Franciotti, Excerpt from After Prince’s Tragic Overdose, Here’s What You Need to Know About Fentanyl, The Blog, HuffPost, June 2, 2016.

Heroin and cocaine users rely on the strip to see if their drugs have been contaminated with the synthetic opioid, but the practice has encountered opposition.

You can’t overdose on fentanyl by touching it

The myth that you can, however, is genuinely dangerous.

A new report shows up to half of potent fentanyl prescriptions were given inappropriately.

A bankruptcy judge approved the sale of Insys’s Subsys, with restrictions on how the drug is prescribed.

In Cities Where It Once Reigned, Heroin Is Disappearing

The diminishing supply should be a victory for public health and law enforcement alike. Instead, in cities like Baltimore, longtime users who managed to survive decades injecting heroin are now at far higher risk of dying from an overdose. That is because synthetic fentanyl, a deadlier drug that is much cheaper to produce and distribute than heroin, has all but replaced it. The dramatic rise of fentanyl, which can be 50 times stronger than heroin, has been well documented.

Just five years ago, fentanyl was one of the least common drugs to overdose on. Now it's surpassed heroin as the number one.

This false belief about the danger of these drugs seems to stem from several unsubstantiated — though widely disseminated — media reports over the past year.

Sending Your Kid to College? Send Them With Fentanyl Testing Strips and Naloxone

Think of them as an essential harm-reduction tool, like condoms.

The China Connection: How One D.E.A. Agent Cracked a Global Fentanyl Ring

Fentanyl is quickly becoming America’s deadliest drug. But law enforcement couldn’t trace it to its source — until one teenager overdosed in North Dakota.

Are people really falling ill from touching fentanyl? In most cases, scientists say no

The synthetic opioid, blamed for increasing numbers of overdose deaths across the U.S., is 50 to 100 times more potent than morphine. But experts consulted by STAT said many of the reported incidents appear to be false alarms that run counter to scientific fact and exaggerate the risks.

Can Just Touching Fentanyl Cause An Overdose?

Hooked: One Family’s Ordeal With Fentanyl

This deadly synthetic painkiller, up to 50 times as powerful as heroin, presents a new level of peril in America’s opioid crisis.

The terrifying tale has been reported as fact, but toxicologists doubt that it is medically possible.

Over a hundred times stronger than heroin, Fentanyl offers a high that's hard to come back from.

Unfortunately, the drug is also used illegally and it’s easier to produce than heroin, according to the Wall Street Journal. Drug dealers tend to prefer selling Fentanyl because the high doesn’t last as long as heroin’s. All of this has contributed to Fentanyl being a growing cause of overdose deaths.

Fentanyl: The Drug Deadlier Than Heroin

The underlying source of the fentanyl crisis in Canada traces back to 2012, when the notorious prescribed painkiller OxyContin was pulled from pharmacy shelves in lieu of a "safer" alternative, OxyNeo. This was the point in time when counterfeit fentanyl disguised as fake OxyContin pills arose, proliferated, and sparked a full-on crisis in the country—with Canada's west being a major epicentre.

Fentanyl: The king of all opiates, and a killer drug crisis

It’s stronger than heroin and more potent than OxyContin. It’s also cheap, ubiquitous, and incredibly deadly. Inside the rise of fentanyl.

Heroin Epidemic Is Yielding to a Deadlier Cousin: Fentanyl

Fentanyl, which looks like heroin, is a powerful synthetic painkiller that has been laced into heroin but is increasingly being sold by itself — often without the user’s knowledge.

How fentanyl became America’s leading cause of overdose deaths

Fentanyl and its analogs are appearing across America, making the US’s deadliest drug overdose crisis ever even worse.

How Fentanyl Changes The Opioid Equation

Almost half of the nearly 200 U.S. drug overdose deaths every day involve fentanyl.

How fentanyl is making deadly drugs even deadlier

But it'll take more than a touch to overdose.

Regional drug dealers add the illicit form of fentanyl to the heroin they sell in hopes of restoring the potency of a product that's been diluted by dealers higher up the distribution chain.

Unlike heroin (derived from poppies), cocaine (processed from coca leaves), or methamphetamine (cooked in garage-sized labs), producing fentanyl and its deadlier analogs pretty much requires a graduate degree in illicit chemistry. “They are fairly sophisticated clandestine laboratory processes, more complicated than methamphetamine, and require some degree of chemistry knowledge...

The Brazen Way a Chinese Company Pumped Fentanyl Ingredients Into the U.S.

The U.S. Has A Fentanyl Shortage ... In The Clinic, Not On The Streets

I hope that my doctor doesn't require their patients to bring their own fentanyl.

Why Fentanyl Is So Much More Deadly Than Heroin

“Fentanyl is always mixed into something else. So you’re putting a lot of trust in your dealer. If you make a batch with just a little more, then you see overdose increases in spots in city.” So there are a lot of ways in which the use of fentanyl can go wrong.

After Prince’s Tragic Overdose, Here’s What You Need to Know About Fentanyl

People who use fentanyl often don’t know they’re taking it. In general, fentanyl used to cut heroin is not being diverted from medical facilities but comes from clandestine labs often in other countries, synthesizing large quantities of cheap, pure fentanyl. Fentanyl has become an attractive cutting agent, since its increased sedative potency can be perceived as strengthening a batch of heroin.

Fentanyl may be hiding in the drugs you’re using. You won’t see it, smell it or taste it, but it can kill you. BE DRUG SMART. Don’t use alone. Start with a small amount. Learn about naloxone.

A strong prescription pain medicine that contains an opioid (narcotic) that is used to manage pain severe enough to require daily around-the-clock, long-term treatment with an opioid, in people who are already regularly using opioid pain medicine, when other pain treatments such as non-opioid pain medicines or immediate-release opioid medicines do not treat your pain well enough or you cannot tolerate them.