Narcan brings people back from the brink of death, but what is there to help them get their life back on track - Connor Narciso 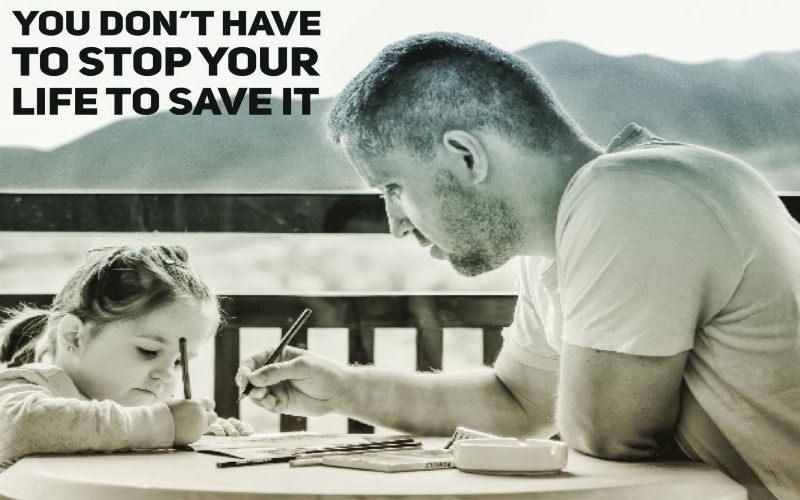 Up until a few years ago, only medical professionals were familiar with naloxone, a medication used to revive opioid overdose victims. Now librarians, school nurses, baristas, parents - anyone who might need to save a life – can carry naloxone and administer it in emergencies as a nasal spray sold as Narcan.

Now comes a provocative new study by economists Jennifer Doleac of the University of Virginia and Anita Mukherjee of the University of Wisconsin. Their paper, The Moral Hazard of Lifesaving Innovations: Naloxone Access, Opioid Abuse, and Crime, concludes that naloxone, which works by dislodging opioid molecules from the brain to jump-start breathing, may not increase the number of lives saved after all.

Doleac and Mukherjee’s argument is that by reducing the risk that abusers will die, the antidote makes opioids more appealing. And, “by increasing the number of opioid abusers who need to fund their drug purchases, naloxone…may also increase theft,” wrote the researchers.

The research presents a classic case of moral hazard: insuring against calamity encourages the behavior that produces calamity. If you’re insured against losing a diamond ring, you are more apt to leave it in a drawer than in a safe.

The authors compared crime and mortality rates in states with Naloxone Access Laws before and after those laws were passed. Such laws institute standing orders that allow pharmacists to dispense naloxone to a layperson without needing a prescription. Data collected between 2010 and 2015 were analyzed.

I, too, have wondered about the impact of naloxone on user attitudes and asked some of the patients in my methadone clinic whether having naloxone at home ever influenced their drug-taking behavior. A few told me that, yes, they probably took extra risks just because they knew that someone could rescue them if they “went out.”

At the level of the individual, life-saving methods like naloxone, especially those that are highly effective, absolutely must be used. For a doctor, this imperative could not be stronger.

The paper by Doleac and Mukherjee, which studied a natural experiment comprising millions of people, not a handful of patients, drew intense criticism.

Reactions to the study ranged from puerile (how dare researchers even ask about moral hazard!) to constructive. Three scholars in the latter camp, for example, noted that a key assumption of the study, namely that naloxone access laws had a large impact on actual naloxone use, has not actually been observed on the ground.

The debate continues but the researchers and their critics agree on two things. First, that no one who overdoses should be left to die. Second, that expanding drug treatment is essential. Indeed, Doleac and Mukherjee reported an impact of access laws appears to be related to treatment availability: the more treatment, the fewer deaths and crime.

This is critical because when naloxone saves someone, it shouldn’t be so that she can die another day. Sadly, that can happen. In fact, a recent study found that one in ten Massachusetts residents who were revived by naloxone died within a year. Police and emergency personnel attest to the frequency with which revived individuals, now in a highly agitated state of induced withdrawal from opioids, walk off within minutes of being revived to use or purchase more drugs.

For people who do want treatment, however, the good news is that three FDA-approved medications exist to treat opioid addiction. Together, the three are often termed “medication-assisted treatment,” or MAT.

The classic treatment is methadone, first introduced as a maintenance therapy in the 1960s. A newer medication approved by the FDA in 2002 for the treatment of opioid addiction is buprenorphine, or "bupe." It comes, most popularly, as a strip that dissolves under the tongue, sold as Suboxone. Like methadone, bupe is an opioid. Thus, it can prevent withdrawal, blunt cravings, and produce euphoria. Unlike methadone, however, bupe's chemical structure makes it much less dangerous if taken in excess, thereby prompting Congress to enact a law which allows physicians to prescribe it from their offices. Methadone can only be dispensed in a special clinic.

In addition to methadone or buprenorphine, which have abuse potential of their own, there is extended-release naltrexone. Administered as a monthly injection, naltrexone, sold as Vivitrol, is an opioid blocker. A person who is "blocked" normally experiences no effect upon taking an opioid drug.

Naltrexone is not an opioid, but it has a drawback: It cannot be administered until opioid-users have gone through a three-to-five day detoxification to purge all remaining opioid from their bodies. Many opioid addicts cannot tolerate “going cold turkey” for a week and insurance, if one has it, does not reliably cover an inpatient-based detox. For this reason – and because naltrexone has no intoxicant properties and therefore won’t be diverted for profit – naltrexone has become the drug of choice to dispense to already-detoxed jail and prison inmates in preparation for release.

Once stabilized on these medications, patients can begin the lengthy process of rehabilitation.

This is how it is supposed to work. But two major problems cloud the picture. One is the poor state of the nation’s treatment infrastructure. A recent study found that only 23% of U.S. drug-treatment facilities provide two or more medications. In its report issued in November, the President’s Commission on Combating Drug Addiction and the Opioid Crisis called for tearing down barriers that prevent the treatments from getting to the people who need them, but so far those barriers remain.

The other is retention in care. After all, a treatment clinic on every block won’t matter unless addicted individuals are motivated to participate. A study published in The Lancet in November, for example, found that buprenorphine and naltrexone were equally effective once both were initiated, but about half of those who took the medications relapsed within 24 weeks.

This attrition rate reflects scores of published reports of premature departure rates of 40 to 60 percent within six months of enrollment. A year or two is the accepted minimum of sustained treatment; drop out typically means resumption of drug use. I have written here about ways to enhance retention in care.

If it turns out that there is indeed a moral hazard associated with naloxone, then our job is to mitigate that unintended consequence with enhanced access to treatment. For many opioid users, the efforts to get them into treatment and engage them in recovery begin with resuscitation from overdose. Naloxone brings drug abusers back to life. Methadone, buprenorphine, and naltrexone can help keep them there.

Why treating addiction with medication should be carefully considered

Research shows that MAT results in what we addiction specialists call harm reduction. This means that while some of these patients may not be ready to be opioid-free, we want to keep them alive and achieving the greatest level of functioning. We don’t want them engaging in self-destructive behaviors like relapsing to street drugs, committing crimes, overdosing or acquiring infectious diseases like HIV. And there’s good evidence, some of which was presented as recently as Jan. 23, 2018, that medications have helped decrease HIV, hepatitis C and crime, as well as improve function.

How ER Doctors Are Fighting The Opioid Crisis

Houry emphasized that “ EDs are a critical entry point for prevention of overdose , with opportunities to improve opioid prescribing, respond to overdoses with overdose education and naloxone distribution, engage in motivational interviewing of patients, initiate treatment for opioid use disorder, and improve surveillance efforts in collaboration with health departments.

The much-anticipated results of a study of competing opioid addiction treatment medications were just published in The Lancet. Researchers Joshua Lee MD and John Rotrosen MD of NYU School of Medicine and Edward Nunes of Columbia University Medical Center, compared the effectiveness of the more popular buprenorphine and a newer medication, injectable, long-acting naltrexone. Their findings startled many in the addiction field. Both drugs proved equally effective in preventing relapse to heroin or other opioids once treatment had begun.

To understand why America’s opioid epidemic keeps getting worse, just look at this map

If we don’t provide even the bare minimum in evidence-based treatment, this crisis will keep getting worse.

Why Opioid Addicts Find M.A.T. Hard to Come By

This video episode from Moving Upstream explores why medication-assisted treatment is a preferred therapy for opioid addiction, but few rehabs offer it.

“We already have an effective treatment that people aren’t getting access to,” he said. “The primary challenge is getting it to people.”

How effective is medication-assisted treatment for addiction? Here’s the science

That means most of these treatments just substitute one opiate for another, as Price correctly noted. Doctors think this is a good thing? Yes, they do. “The drug that we’re replacing is a dangerous one that will kill you, and we’re replacing it with a drug that allows you to go back to work and have money in your pocket and allow you to live normally again,” said Dr. Stuart Gitlow, past president of the American Society of Addiction Medicine.

How France Cut Heroin Overdoses by 79 Percent in 4 Years

And the United States could, too

Prescription drugs designed to treat addiction are being traded alongside heroin and painkillers.

It seems like a paradox: Most doctors and scientists agree that the best way to treat opioid addiction is with other opioids. That’s because opioids are so powerful that they change the brain chemistry of the people who use them.

Unlike most opioid addiction treatments, Lucemyra is not derived from opioids themselves.

Before Joe Thompson switched treatments for his opioid addiction, he was a devoted stay-at-home father, caring for his infant son after his wife returned to work. His recovery was aided by the anticraving medication buprenorphine. But after over two years free of heroin, Mr. Thompson, a former United Parcel Service worker from Iowa, relapsed and decided to try another kind of treatment program.

There’s a highly successful treatment for opioid addiction. But stigma is holding it back.

Medication-assisted treatment is often called the gold standard of addiction care. But much of the country has resisted it.

We Know How to Treat Opioid Addiction

The World Health Organization calls these medications “essential” because expanding access to them reduces crime, infectious disease, and death. In blocking access, these all rise. Given all of this, it should come as a shock that only a quarter of patients who sought treatment for opioid-use disorders in the U.S. received these medications. This is particularly problematic because drug treatment programs have a notoriously high dropout rate. Those that are given these medications stay engaged in the process for longer than those who don’t use them.

Naloxone, Yes, But 3 Other Drugs Are Essential to Fight the Opioid Epidemic

For people who do want treatment, however, the good news is that three FDA-approved medications exist to treat opioid addiction. Together, the three are often termed “medication-assisted treatment,” or MAT.

MAT is one of the most effective forms of therapy for substance use disorders but is widely misunderstood. Take a look at our new infographic and separate fact from fiction!

Medications, including buprenorphine (Suboxone®, Subutex®), methadone, and extended release naltrexone (Vivitrol®), are effective for the treatment of opioid use disorders.