Where in health am I? : Home / Health Cloud / Challenges / Drugs & Medications / Substance Use Disorder / Club Drugs

I don't do drugs. I am drugs - Salvador Dali 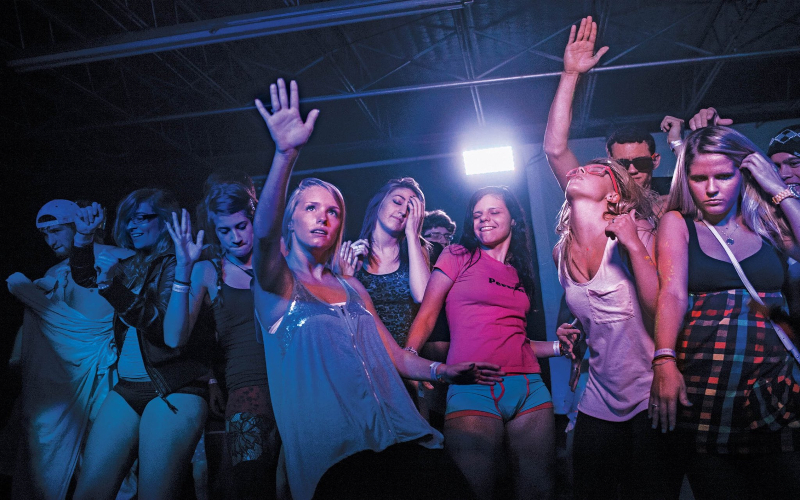 One spring morning a couple of years ago, Megan* woke up from a deep sleep, lying in bed next to a man she didn't know, in an apartment she didn't recognize, wearing only a bra and a pair of jeans. She asked the stranger next to her, "Who are you? What is your name?" and then, "Did you have sex with me last night?"

"Yeah," he answered. "You were totally asking for it."

The night before, Megan, who at the time was a college student in her early 20s, had gone out with friends to a bar. She spent most of her time nursing a beer, bored by the scene around her. Her friends struck up a conversation with a group of guys who were members of one of the school's fraternities.…

Drinking Water Should be Free at All Clubs and Festivals. Here's Why

Water is a human right, essential to our daily survival. In places where the human body is subjected to excessive heat, exercise, and dehydration — like clubs and festivals — access to drinking water is even more important. But some venues insist on charging prices for water that are often prohibitively high. And many of those venues exist in places where heat illness is a major concern. Even where water is cheaper, the reluctance of some venues to make it freely and easily available puts human lives, operating licenses, and the electronic music scene as a whole in serious and unnecessary jeopardy. This needs to change.

Drug use can have social benefits, and acknowledging this could improve rehabilitation

Illicit drug use is often framed in terms of risk and antisocial or criminal behaviour. But drug use is often a highly social activity. For many people, the pleasure of using drugs is about social connection as much as it is about the physical effects. A new study aiming to understanding the social benefits of drug use may help us to improve responses to risky or harmful drug taking.

Specifically, we support the availability of facilities to allow young people at venues or events where drug taking is acknowledged to be likely to seek advice about the substances they’re considering ingesting.

Testing festival goers’ pills isn’t the only way to reduce overdoses. Here’s what else works

We know that prohibition doesn’t work to reduce either harms or drug use. But what does? Most illicit drugs used at festivals, including ecstasy (methylenedioxymethamphetamine or MDMA), started out as relatively benign pharmaceuticals.

Alcohol is by far the most dangerous 'date rape drug'

While fears over exotic rape drugs might be unfounded, rape is all too common and alcohol frequently plays a role. Rather than fixating on unlikely scenarios of drink spiking, we might be better served by reexamining our collective relationship with alcohol and reinforcing the message that sex with someone incapable of giving consent is assault.

Europe takes a much different approach to drug use at concerts. "We put our heads in the sand and pretend it's not happening," Sferios said. In Europe, on the other hand, "they come at it from a different perspective: public safety."

Although alcohol remains the primary “social lubricant,” it has been joined by many newer psychoactive drugs that are used to intensify social ex-eriences. Because of the prevalence of these drugs at dance parties, raves, and nightclubs, they often are referred to as “club drugs.”

How the war on drugs made raves more dangerous

Rave organizers told Anderson that, as a result, they try to avoid looking like they're aware of drug use at their events. They don't, for example, offer drug tests, which would let ravers test substances for harmful or deadly contaminants before consuming them. Some organizers don't even offer free bottled water to help prevent heat strokes, a potentially fatal side-effect of some drug use on the dance floor.

Previous research has suggested that the risk of being drugged is an overblown urban myth. But a 2016 study says that drink spiking is very real and often leads to sexual assault for women on college campuses.

Drug rape is one of the fastest-growing crimes against women in the U.S.

What Are Date Rape Drugs and How Do You Avoid Them?

When a Rapist’s Weapon Is a Drug

Alcohol is still by far the most commonly used drug in sexual assaults, implicated in 40 to 60 percent of reported cases, one recent study found. So-called “knockout” drugs were identified in just 2 to 3 percent of cases. But assaults involving the drugs appear to be on the rise in the United States and elsewhere, and have earned a more menacing reputation than liquor-induced incidents.

How do you prove a crime occurred when there's no evidence and the victim has no memory? Whether in the national spotlight like the Bill Cosby allegations or in the shadows of a college campus, date-rape-drug perpetrators are painfully difficult to prosecute. Here, a deep dive into why.

DanceSafe has two fundamental operating principles: harm reduction and peer-based, popular education. Combining these two principles has enabled us to create successful, peer-based educational programs to reduce drug misuse and empower young people to make healthy, informed lifestyle choices. We are known for bringing adulterant screening (a.k.a., “pill testing,” “drug checking”) to the rave and nightlife community in the U.S., and for distributing unbiased educational literature describing the effects and risks associated with the use of various drugs.

Date-rape Me, My Friend

This is a touchy subject, I know. Largely because everybody seems to think that at some point they have been given an adulterated drug.

These drugs are powerful and dangerous. They can be slipped into your drink when you are not looking. The drugs often have no color, smell, or taste, so you can't tell if you are being drugged. The drugs can make you become weak and confused -- or even pass out -- so that you are unable to refuse sex or defend yourself. If you are drugged, you might not remember what happened while you were drugged. Date rape drugs are used on both females and males.

Club drugs have become more common in recent years. Sometimes people use them to commit sexual assaults. Club drugs can cause serious health problems and sometimes death. They are even more dangerous if you use them with alcohol.

Club drugs have varying effects. Ketamine distorts perception and produces feelings of detachment from the environment and self, while GHB and rohypnol are sedating. GHB abuse can cause coma and seizures. High doses of ketamine can cause delirium and amnesia. Rohypnol® can incapacitate users and cause amnesia, and especially when mixed with alcohol, can be lethal.

Date rape drugs are any type of drug used to make rape or sexual assault easier. Alcohol is often used this way. Or date rape drugs can be put into a drink without you knowing.