Where in health am I? : Home / Health Cloud / Challenges / Drugs & Medications / Substance Use Disorder / Inhalants / Poppers

While you probably won’t find nitrite “poppers” on a Papa John’s menu, they can be quite “pop”-ular for recreational use at bars, nightclubs, and sex parties - Bruce Y. Lee 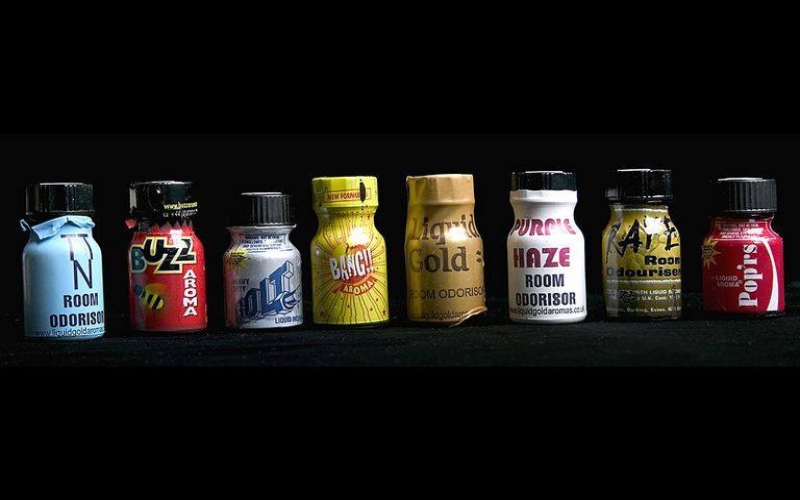 Are Poppers Cooking Your Brain?

Poppers are small bottles of amyl nitrite, which belongs to a class of chemicals known as alkyl nitrites. It was first synthesised in 1844 by a French chemist named Antoine Balard, who observed that the chemical relaxed smooth muscles and dilated arteries, which briefly led to its use as a remedy for angina—a cardiac condition…

How a Victorian heart medicine became a gay sex drug

Wake up and smell the poppers.

Nitrite ‘Poppers’: Here’s Why FDA Warned Against Their Use For Fun, Sex

That’s because nitrite “poppers” can lead to all sorts of bad health effects, including death. And death, for most people, is not good for sex.

From Heart Medicine to Party Drug: A Brief History of Poppers

How amyl nitrite morphed from angina medication into the UK's favourite legal high.

Poppers - the lowdown on a still-legal high

Poppers, inhalable nitrates that provide a euphoric head rush, have been excluded from the legal high ban. We caught up with the two men that drive the UK's poppers supply for an insider track on the recreational drug popular with the gay community to enhance sexual pleasure.

Poppers can now be sold in pharmacies, but getting them might not be so easy

Poppers have been used as a sexual enhancement aid for decades. Allowing their sale in pharmacies is a good first step but we have a long way to go until they’re easily accessible.

More evidence that the harmless high isn't quite harmless.

Are Poppers Cooking Your Brain?

You know that feeling like there's a toaster inside your face? We asked a doctor if that's bad.

‘Poppers’ are short lasting drugs which cause a headrush and muscle relaxation. They appear as liquids that produce a vapour that can be inhaled. Poppers are chemicals called alkyl nitrites. The first, amyl nitrite, was made in 1844 and was used to help relieve angina (chest pains). Widespread recreational use of amyl nitrite is thought to have started in the 1960s. After consequent restrictions on its production and use, various other related alkyl nitrites appeared.

People sniff poppers, either straight from the bottle or from something absorbent like a cloth or the end of an unlit cigarette.