It’s a fundamental problem that’s kind of been swept under the carpet in the tech industry. It’s a natural response to an unnatural environment - Cyriel Diels 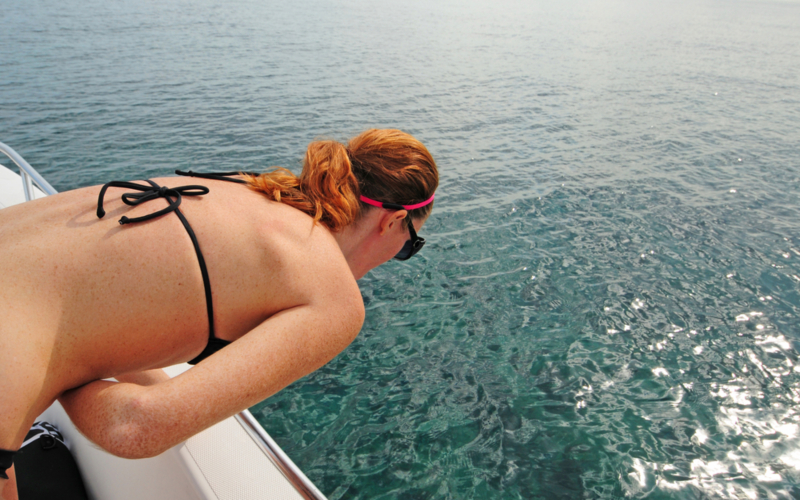 Life isn't fair. One of the clearest instances of this is the mysterious illness scientists call kinetosis — which most people know as motion sickness.

Some people seemingly start to feel sick the instant they sit down in the passenger seat. If you're one of them, a winding road, a fast-accelerating driver, or being in the back seat is enough to make you utterly nauseated.

Then there are the lucky ones immune to such ills. They sit in the back seat and read for hours as the road winds back and forth, then spring up when the ride is over, oblivious to your misery.

What accounts for the difference? The frustrating truth is that we don't really know. Scientists have found that women and people who get migraines are way more likely to get motion sick, but we don't fully understand why — and we don't even know what causes motion sickness in the first place.

The true cause of motion sickness is still a mystery

Conventional wisdom holds that motion sickness — whether it occurs in a car, a boat, or a plane — is the result of a mismatch in the signals your brain receives from your eyes and your body systems that indicate movement through space.

When you're in a car looking down at a book, the thinking goes, your eyes are telling your brain that you're not moving. But your vestibular system (a series of structures in your inner ear) thinks you're moving forward and turning left and right as the car moves, explains Timothy Hain, a Northwestern neurologist who studies dizziness and motion sickness.

Some scientists have suggested the brain responds by triggering nausea for an evolutionary reason: Historically, this sort of signal mismatch might have been most often caused by a toxin-induced hallucination, so vomiting up the toxin would have been the best solution.

But there's no real evidence for this argument — and some scientists say the mismatch idea itself is wrong. Thomas Stoffregen, a University of Minnesota kinesiologist, has advanced the main competing theory: that motion sickness is a symptom of the body's inability to maintain proper posture and control in a moving environment.

"Ships are an obvious example," he says. "When the floor is rolling and pitching under you, there will be some body movement that is not under your control." That uncontrolled swaying, he argues, leads to motion sickness.

For evidence, he points to studies he's conducted on ships at sea, with virtual reality displays, flight simulators, and video games, and in a custom-built, nightmarish, nausea-inducing moving room in his lab. "In each and every case, we have found that objective patterns in body sway data differ between people who get sick and people who do not get sick, and that those differences exist before anyone feels sick," he says.

It's uncertain which of the reasons behind motion sickness is correct. But we do know a few factors that can make people more or less prone to suffer from it:

1) Gender: Many different studies have found that women experience motion sickness far more often than men. Part of it may have to do with genetics.

A study published earlier this year using 23andMe data, for instance, identified 35 different genetic variants that were more common in people who frequently get motion sick. Many of them, however, appeared to have larger effects in women — with one particular variant three times more likely to be associated with motion sickness in women than in men. This likely has something to do with the way these genes function in women, but it's unclear how.

In some circumstances, the different body sizes of men and women could also play a role. Stoffregen argues that if swaying and instability cause motion sickness, the fact that women are generally shorter than men — and have a lower center of gravity — could cause them to sway more in unstable conditions. In lab experiments, he's found that women, on the whole, do indeed sway more, and those who sway the most are more likely to experience motion sickness.

2) Migraines: It's well-established — from both questionnaires and lab studies — that people who get migraine headaches are way more likely to suffer from motion sickness. Hain estimates that migraine sufferers are about five times more likely to get motion sick in a given situation.

This, too, is a mystery, but it might also have something to do with genetics. The same 23andMe study found a few genetic variants shared by both migraine and motion sickness sufferers. A number of scientists have proposed that both illnesses might actually share a common underlying mechanism, but at this point, it's unclear — especially since the root causes of migraines aren't understood either.

3) Other genetic factors: It appears that a number of other genetic variants are linked to motion sickness, too.

A 2006 study comparing genetic and identical twins estimated that as much as 57 percent of the variation in people's tendency to get motion sick was from genetics. The 23andMe study, meanwhile, identified several related to the body's balance and visual systems, as well.

How you can minimize motion sickness

None of these factors, alas, are things you can change. But experts say there are a few things you can do to reduce your odds of getting motion sick.

1) Be the driver: In a car, drivers tend to get motion sick far less often than passengers, perhaps because they're able to anticipate movement. If you're not driving, Hain recommends acting as much like the driver as possible — sitting in front and looking in the direction of travel.

2) Minimize movement: Stoffregen recommends consciously using the head rest, in order to anchor your head in place and minimize the amount of left-and-right swaying. Whatever vehicle you're in, try to sit in a stable position. For example, the middle of a plane generally experiences the least severe turbulence.

3) Don't drink alcohol, read, or sit backward: Doing any of these makes it harder to sync up the stimuli from your eyes and vestibular system — and makes it more difficult to remain stable.

4) Take medication — but it'll make you drowsy: Dimenhydrinate and meclizine (which are used in various forms of Dramamine) can both be effective in reducing motion sickness, but they both mainly work by making you drowsy, dulling your overall sensitivity to movement. Take with caution.

Source: Joseph Stromberg, Here's why you get carsick — even when other people don't, Vox, August 9, 2015.

How to Deal With Motion Sickness

LET YOUR EYES SEE THE MOVEMENT When motion sickness hits, it’s natural to want to keep your eyes shut or lie down, but Dr. Derebery recommends doing the opposite.

Motion sickness, car sickness, travel sickness, sea sickness; all names for that awful affliction that strikes fear into some of us at the mere thought of taking a journey. Those who don’t suffer from it have no idea how it feels, and those that do dread long trips, windy roads and rough seas. Even typing the words makes me feel queasy!

The newest ailment to worry about at the office? Motion sickness

Some of the world’s tallest buildings sway back and forth over three feet, which can be less than fun for the employees inside them. People who work near the top of tall buildings have reported problems with nausea, headaches, or even anxiety and fear (especially on windy days)...

Are Self-Driving Cars a Motion-Sickness Nightmare Waiting to Happen?

Researchers at U-M’s Transportation Research Institute say that there are features inherent in driverless cars that make the risk of car sickness more likely. Not keeping one’s eyes on the area of motion, and being unable to anticipate which way the car will go, increases the likelihood of motion sickness.

Change the circumstances that can lead to conflict between your senses and make you sick.

Feeling Woozy? It May Be Cyber Sickness

A peculiar side effect of the 21st century is something called digital motion sickness or cybersickness. Increasingly common, according to medical and media experts, it causes a person to feel woozy, as if on a boat in a churning sea, from viewing moving digital content. “It’s a fundamental problem that’s kind of been swept under the carpet in the tech industry,” said Cyriel Diels, a cognitive psychologist and human factors researcher at Coventry University’s Center for Mobility and Transport in England. “It’s a natural response to an unnatural environment.”

Here's Why You Get Car Sick: Your Brain Thinks It's Being Poisoned

Experts think that car sickness (or any kind of similar motion sickness) is brought on because humans have only recently started travelling in things like cars, buses, and boats, and our brains haven't fully adapted yet.

How to Avoid Motion Sickness While Traveling

Make peace with the fact that you can’t control every factor of a trip — or anything in life. Just prepare as well as you can, for motion sickness as much as everything else, and if the punches come, be ready to roll with them.

How To Stop Motion Sickness When Traveling

I hope some of these tips help you guys & for all my nauseous travelers, you are not alone!

Part of the difficulty with devising treatments is that experts don't know exactly what causes motion sickness. The prevailing belief is it is caused by a sensory mismatch between the visual and vestibular systems. The vestibular system, which is part of the inner ear, monitors movement and helps control balance.

Still, like the common cold, there may be no single explanation for motion sickness. Neither he nor anyone else has explained why there should be any subjective consequences to getting in a car, or why we maintain a lifelong talent for riding a bicycle while even experienced sailors struggle at sea after months on land. Current treatments for motion sickness do little more than induce drowsiness, Dr. Stoffregen said. On a recent cruise, the crew spent two days wondering where he’d disappeared to.

The Mysterious Science of Motion Sickness

New research starts to explain why some people feel nauseous on cars, boats, buses, and carnival rides, while others don't.

Why doesn’t the driver get carsick?

If you are one of the unlucky who get carsick, you probably know quite well that being the driver is much less nauseating than being a passenger. But why is this the case?

Everyone has the capacity to become motion sick, but there’s no real explanation for why some people do and others don’t.

Here's why you get carsick — even when other people don't

Life isn't fair. One of the clearest instances of this is the mysterious illness scientists call kinetosis — which most people know as motion sickness. Some people seemingly start to feel sick the instant they sit down in the passenger seat. If you're one of them, a winding road, a fast-accelerating driver, or being in the back seat is enough to make you utterly nauseated. Then there are the lucky ones immune to such ills.

5 Tricks To Help You Prevent Motion Sickness Every Time

Fortunately, the condition is preventable. Below, we look at ways to prevent motion sickness before it sets in.

Oh motion sickness, why do you plague us so? We’ve taken Antarctic cruises and Arctic expeditions to far and distant lands to gaze in wonder at the Aurora Borealis, to marvel at clean unpopulated snow-scapes, to meet the local wildlife… …or we would be doing all those things if we weren’t so busy hanging over the side of the ship and introducing the marine life to what we had for lunch.

Your comprehensive resource for preventing, treating and beating motion sickness in all its forms.