Where in health am I? : Home / Health Cloud / Challenges / Emergencies / Disasters / Heat Waves

Unlike floods, earthquakes, and tornadoes, heat's devastation is insidious, pushing on the human body’s limits until it suddenly exceeds them - Kendra Pierre-Louis 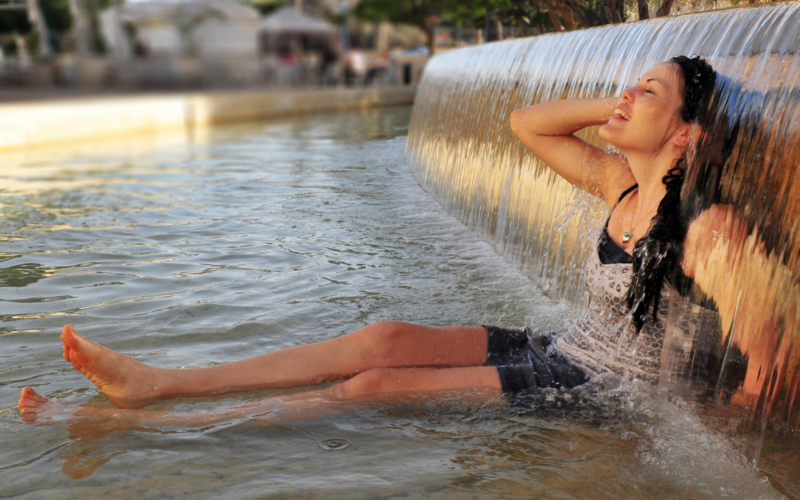 It killed 739 people in Chicago 1995. In Europe in 2003, it claimed another 70,000 lives. Just seven years later, it would take down 55,000 more in Russia. Extreme heat can and does kill. And while those heatwaves garnered global attention, according to a study released today in the journal Nature, they’re more common than we think. The study’s authors note that worldwide, some 30 percent of people are exposed to life-threatening extreme heat for at least 20 days of each year. If we do nothing to reduce climate changing emissions that are helping to push the mercury higher, they write, 74 percent of people will experience routine extreme heat events by 2100. And as is already the case today, at least some of those people will die.

Unlike floods, earthquakes, and tornadoes, heat's devastation is insidious, pushing on the human body’s limits until it suddenly exceeds them. Above a certain threshold—one that's maddeningly difficult to determine due to multiple variables like humidity, sunlight, breeziness, and weather—heat just makes it harder to exist. The hemoglobin that picks up oxygen and carries it in our blood has a harder time binding to it as temperatures rise, turning respiration into a chore—each breath gains us less oxygen. Meanwhile, sweat tends to desert us if we’re very young, elderly, or if the air is already very humid. Sweat cools the body through evaporation, but young children and the elderly tend not to sweat as much, and when the air is already thick with humidity, sweat doesn’t evaporate—so our bodies don’t cool off.

All of this would be taxing enough in a pristine environment, but our anthropogenic altered world is anything but pristine. Hot weather mixes our airborne pollutants with sunlight, creating ground level ozone (smog’s main ingredient). According to the United States Environmental Protection Agency EPA, poor air quality can cause chest pain, coughing, throat irritation, and congestion and worsen bronchitis, emphysema, and asthma. One study found that air pollution, including smog, kills more than three million people per year.

To estimate how many more people will be exposed to stifling temperatures under climate change, the study authors looked at 911 peer reviewed papers, which included data from 1,949 case studies on regions where extra deaths were linked to high temperatures.

But how to determine which temperatures were hot enough to be considered...hot?

“That is big problem we encountered,” says lead author Camil Mora, a biogeography researcher at the University of Hawaii at Manoa. “There are many definitions of a what a heatwave is, and this is what makes this paper so unique. What we decided to do once we collected all of the data was to let the threshold under which people died determine the climatic condition of what counts as a heatwave.”

Mora discovered that in some instances, deaths increased at temperatures as low as 72 degrees Fahrenheit.

“That's mind-blowing, people dying such low temperatures, but we found out that there was super high humidity on those places,” says Mora. “And you had the opposite case as well, where people died at super-hot temperatures but it was unusually dry.”

Not everyone agrees that this is the best way to study heat. “It’s a bit of an ambitious study, they’re trying to answer a really important question," says Daniel Mitchell, an atmospheric scientist at Oxford University who was not a part of the study. "But I don’t necessarily think they’re going about it in the right way.” Mitchell thinks that defining deadly heat based on a literature search instead of some underlying physical science is problematic.

“There are lots of things that can lead to mortality that have nothing to do with the climate. A good example was Egypt 2015, the heat wave there where a large number of people died, but they all died in places like prisons and psychiatric hospitals," Mitchell says. "And the reason was because the timing of the heat wave was such that they didn’t have people around to take care of them.”

Similarly, the 2003 European heatwave was so deadly in France because it coincided with the country's fairly ubiquitous habit of going on vacation in August. Many of the cities emptied out, leaving behind elderly people without caregivers. The sad timing was made worse by the region's general inability to deal with such heat—air conditioners were scarce, and things like cooling centers (which are common in America) are rare in Paris. French cities fared better in subsequent heat waves: hot summers have increasingly become their new normal, so they're better equipped to survive them.

Mitchell also notes that the study extrapolates what will happen based on data mostly in the north, despite the fact that many countries, especially those in the developing world, are quite different.

“Our cities are very different in the northern mid-latitudes than the tropical belt of Africa,” says Mitchell. “Our economy is very different, with a lot of societal factors that would lead to very different casualties in Europe, and they assumed that it’s the same across the board.”

But while regions closer to the poles will have the most warming, Mora says, people in the tropics are actually the most vulnerable. Even though it won't warm as much, and even though they've already had to deal with potentially dangerous temperatures in ways many northern cities have not, they're closer to that threshold beyond which people start succumbing—it's already hot and humid there. So even relatively small amounts of warming could prove disastrous.

In other words, extrapolating what will happen in the tropics based on the northern mid-latitudes might be underestimating the impact, not overestimating it. And Mora has already found examples of people shifting to their behaviors to cope with the intense heat.

A 2015 study published in Nature Climate Change found that in Australia, worker absenteeism and reductions during a 2013/2014 heatwave cost $6.2 billion U.S. dollars (roughly .3 percent of the country’s GDP). A 2009 study published in the International Journal of Public Health looking at workers on construction sites in India and in shoe factories in Vietnam found that lengthy rest periods during the hottest days made 8-10 hour days stretch to 15-16 hours. Even if heatwaves don't kill us, they certainly take their toll.

Despite the issues that Mitchell sees in the study, he thinks it's making a necessary point. “It’s an important study and in some ways it’s a good step in the right direction,” says Mitchell. “It’s highlighting that, for instance, in terms of climate related variables, they are increasing. It’s highlighting that in the past these things have often lead to high mortality counts. It is a paper that is advocating to start looking at adaptation for large heat waves.”

How can we talk about heatwaves without mentioning climate change?

In the end, whatever the means, it’s important we connect the dots on climate change. We aren’t going to find the solution to humanity’s greatest challenge without acknowledging the problem and its sheer scale.

The science of why heatwaves are so dangerous to human health

The problem with heatwaves is that excessive heat can put humans under a lot of physiological stress. Because sweating is the most effective mechanism, during hot weather the people who are most vulnerable are the ones whose sweating mechanism is, for various possible reasons, subpar — the elderly, the chronically ill and children. “Elderly, children and pets are most at risk of heatwaves,” Kumar says.

Can We Blame the Summer Heat Wave on Global Warming?

Doling out blame for any single weather event is a tall order because weather is complicated. For one, it’s influenced by many factors: from planetary orbits to ocean currents to human activity. For another, it’s fickle. Yes, we’ve seen a decades long trend toward warmer temperatures, but it’s not constant.

A new study aims to answer: When do we know if bad weather can be blamed on global warming?

Pinning down blame for complex weather events isn't straightforward, due to the numerous variables involved, from water temperature to air pressure. But thanks to state-of-the-art climate models, scientists can now calculate the likelihood of individual extreme weather events having happened due to climate change.

Outdoorsy types and outdoor workers like roofers might suffer first, but it's the elderly and the mentally ill who make up the majority of deaths.

Droughts, Heat Waves and Floods: How to Tell When Climate Change Is to Blame

Get Used To These Extreme Summer Heat Waves

Heat Waves Can Be Bad For Your (Mental) Health

How Does a Heat Wave Affect the Human Body?

Some might like it hot, but extreme heat can overpower the human body. An expert from the CDC explains how heat kills and why fans are worthless in the face of truly high temperatures.

The latest winter storms have been deadly. But are cold snaps deadlier than heat waves?

Most people have dealt with discomfort at both ends of the temperature spectrum, so it’s not hard to believe that extremes in either direction can quickly become dangerous. However, researchers have struggled to figure out just how much temperature is to blame when hospital visits rise during periods of heat and cold.

By the year 2100 the vast majority of people worldwide can expect to deal with deadly heat waves where they live.

The UK heatwave has revealed the relics of ancient settlements

Relics of ancient settlements have started appearing in rural Wales as ground dries out to reveal deeper trenches.

When You Can’t Find Shelter From the Heat

Temperatures elevated by climate change can be deadly for people experiencing homelessness.

Three-quarters of the planet could face deadly heatwaves by 2100

Unlike floods, earthquakes, and tornadoes, heat's devastation is insidious, pushing on the human body’s limits until it suddenly exceeds them.

27 Ways Heat Waves Can Kill You

It isn’t always just the heat that kills people in heat waves, she points out. Smoke from forest fires causes breathing problems and heart attacks, or people drown trying to cool off in lakes and rivers.

Here’s a look at a few of the more promising ideas that cities around the world have been pursuing to try to beat the heat.