Where in health am I? : Home / Health Cloud / Challenges / Gastrointestinal / Diarrhea / Child Diarrhea 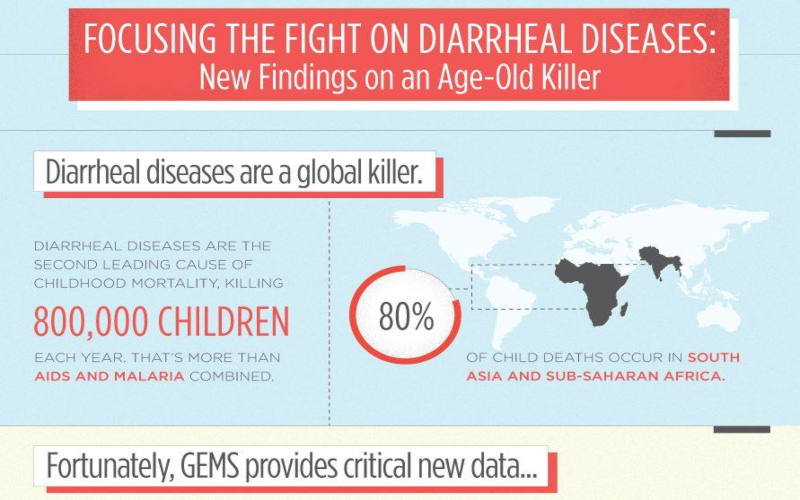 Diarrhea. It is often the stuff of comedy, a dreaded first date woe, or an uncomfortable inconvenience after indulging in too much guac.

Beyond the silly and the squeamish, though, there’s a more important story to be told: diarrheal disease is a health crisis for millions of children and families around the world. Here, we debunk some of the common myths that allow this menace to continue wreak havoc in poor communities, under the radar. By raising our voices together, we can put the true cost of diarrhea in the spotlight and help give children the healthy lives they deserve!

Myth 1: Diarrhea is no more serious than the common cold.

Despite Progress, Too Many Children Are Still Dying From Diarrhea

In the decade between 2005 and 2015, the world changed dramatically. The smart phone was introduced. New planets were discovered. Yet children were still dying from a preventable and treatable illness that has plagued the world since the beginning of time.

The 2018 Story of Diarrheal Disease

The 2018 story of diarrheal disease is that fewer children are dying than ever before, but episodes of illness remain high. That means surviving children are at risk of physical and cognitive growth shortfalls that can have a long-term impact on their quality of life.

Norovirus gives 699 million people diarrhea every year. No one talks about it.

We may worry about salmonella in our chicken and the chemical additives in our bread. But how often do we fret about the most common cause of food poisoning and serious stomach flu in the US? No, we don't really talk much about norovirus, an extremely contagious bug spread by — prepare yourself — ingesting the stool or vomit of an infected person often through food or touching a contaminated surface.

A Quiet Revolution in the Treatment of Childhood Diarrhea

Far from the world’s fears about Ebola and MERS, a quiet revolution is taking place in the diagnosis of a disease much more prosaic but far more threatening: childhood diarrhea. After pneumonia, diarrhea is the deadliest threat to infants worldwide, killing about 700,000 every year.

'We need to talk about shit': six bugs cause 78% of diarrhoea cases

Pathogens are to blame for twice as many cases as thought, study finds, paving way for more effective vaccines and antibiotics.

Diarrhea 101: Time To Talk About Something We Don't Usually Talk About

Diarrhea isn't something we usually discuss in public. But as the second leading cause of death for children younger than 5, it's a topic global health advocates want more people to talk openly about.

India’s rural doctors are endangering the lives of millions of young children with their sheer incompetence. More than 90% of medical practitioners in rural India prescribed wrong—and potentially dangerous—treatments for cases of diarrhoea and pneumonia, according to a report published in the American Medical Association’s monthly journal, JAMA Pediatrics.

Beyond the silly and the squeamish, though, there’s a more important story to be told: diarrheal disease is a health crisis for millions of children and families around the world. Here, we debunk some of the common myths

4 Germs Cause Most of Infants’ Severe Diarrhea

Just four germs are responsible for most of the severe and fatal diarrhea among the world’s infants, according to a large new study. Diarrhea is a major killer of children, with an estimated 800,000 deaths each year; it has many causes, and doctors want to focus on the most common ones to bring death rates down.

We created defeatDD.org to inform and inspire advocates committed to joining their voices and raising awareness about diarrheal disease. Our website provides key resources and links to information on simple, lifesaving interventions that can significantly reduce childhood diarrhea deaths worldwide.

Stop Diarrhoea Initiative is a signature programme of Save the Children, in partnership with Reckit Benckiser. The programme was envisaged to contribute to RB and Save the Children's global ambition of removing diarrhoea as a top five leading cause of death amongst children by 2020. In line with the Save the Children's Theory of Change, the programme will: test the effectiveness and efficacy of the WHO-UNICEF 7 point plan; collate evidence to demonstrate proof of concept and value for money, and advocate for the state and national government and its partners to replicate and scale up the approach nationally.

4 Germs Cause Most of Infants’ Severe Diarrhea

The prominent role of Cryptosporidium came as a surprise to the authors; it had been best known as a killer of adults whose immune systems were suppressed by AIDS.