Where in health am I? : Home / Health Cloud / Challenges / Gastrointestinal / Diarrhea / Cholera

If everybody contemplates the infinite instead of fixing the drains, many of us will die of cholera - John Rich 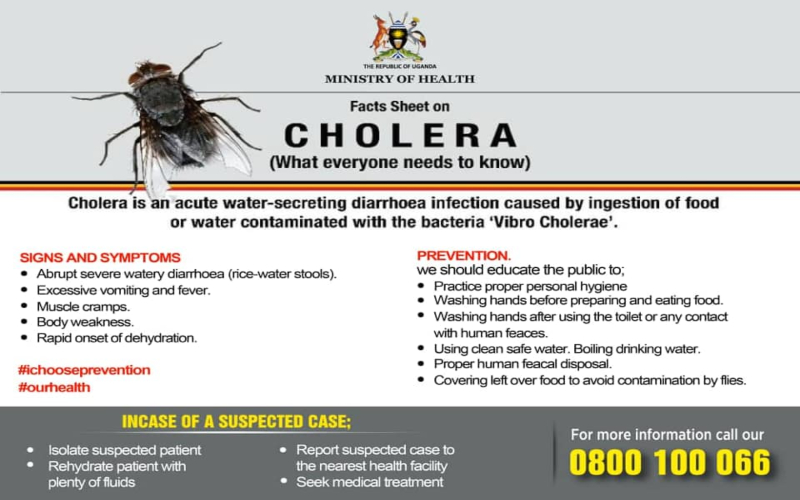 image by: Ministry of Health- Uganda

CHOLERA most forcibly teaches us our mutual connection. Nothing shows more powerfully the duty of every man to look after the needs of others.” So said Titus Salt, a Victorian wool baron who worked to put an end to cholera in Yorkshire. It was cholera, as much as the great stink, which led London's masters to build vast sewers, install toilets, and promote hygiene. Cholera struck fear into 19th-century cities, sweeping away the rich along with the poor. America's President James K. Polk died of the disease after a visit to New Orleans. His successor, Zachary Taylor, may also have succumbed.

We are microbiologists who study cholera because this ancient disease continues to thrive and can have a devastating impact on communities and entire countries. The Camilli lab has been focused on the disease for over two decades. We are interested in developing vaccines and phage products to prevent cholera from sickening people and triggering outbreaks.

Turning the Tide Against Cholera

Two centuries ago, a global pandemic rose from the swamps of Bangladesh. Now researchers there may have found the tools to stop it.

Cholera clinics also require constant cleaning. This one will be scrubbed down four times a day. MASS designed the interior to make that as easy as possible.

A Living Legacy: What London's History Is Teaching Us About Tackling Cholera In Mozambique

Cholera is a word that fills the world's poorest people with dread, but if asked, the average person in the west would probably know little apart from what is gleaned from foreign correspondents reporting from hellish refugee camps.

The disease's short incubation period of two hours to five days increases the likelihood of outbreaks. 80% of cholera cases can be treated and resolved with oral hydration salts.

Cholera in Haiti Isn't Just Bad News—It's Not Going Away

THE ODDS ARE stacked against Haiti. Geologically, it's wedged between tectonic plates, where earthquakes happen. Meteorologically, it's in the center of hurricane alley, where massive storms roil. And historically, the country is forever fighting a colonial legacy that left it largely incapable of recovering from natural disasters. Like endemic cholera, caused by the United Nations' botched response to 2010's earthquake and exacerbated by Hurricane Matthew flooding the country's southwestern peninsula.

Cholera: how African countries are failing to do even the basics

Cholera is referred to as a disease of poverty because of the lack of social development in the areas in which it occurs. The constant threat of natural catastrophes such as flooding and man made ones including civil unrest, make the management and prevention of cholera a huge challenge in most of Africa.

Could Climate Change Cause The Next Cholera Pandemic?

New research suggests we may be closer to a global cholera outbreak than once believed.

In the absence of working water and sanitation systems, cholera is not just hard to treat — it’s deadly. The disease spreads through water, so once a central water source is contaminated, everyone who relies on it is likely to get the disease. It’s made worse during emergencies such as the Yemeni civil war where people are huddled in overcrowded refugee camps, sharing whatever scarce supply of water there is.

What They Knew, and When They Knew It

On Oct. 20, 2010, the U.S. Centers for Disease Control and Prevention confirmed the first recorded cholera outbreak in Haitian history. Within days, 300 people would be dead. In a country where few had clean water, adequate sanitation, or immunity to the disease, experts knew the waterborne infection could rip through the island like lightning through an ungrounded swimming pool.

Solving the sanitation problem is within reach, and it could avoid many deaths.

MEDBOX is an innovative online library aimed at improving the quality of healthcare in humanitarian action, worldwide.

The Global Alliance Against Cholera was established in early 2010 to respond to the increasing incidence of cholera and other water borne diseases in the Eastern part of the Democratic Republic of Congo (D.R.C.). It has since been expanded to other Cholera-affected countries. The G.A.A.C. is an Alliance, not an operational agency that relies for its legitimacy on the authority of knowledge of its Advisory Council members.

This website is a repository of tools and resources to help ministries and agencies decide when, where, and how to use Oral Cholera Vaccine, or OCV, as part of an integrated cholera control strategy.

In 2012, with funding and support from the Bill & Melinda Gates Foundation, The Task Force convened key cholera stakeholders and launched the Coalition for Cholera Prevention and Control (CCPC or the Coalition) to stop cholera transmission and end cholera deaths globally.

Cholera can be life-threatening but it is easily prevented and treated. Travelers, public health and medical professionals and outbreak responders should be aware of areas with high rates of cholera, know how the disease spreads, and what to do to prevent it.

Cholera often breaks out when there is overcrowding and inadequate access to clean water, trash collection and proper toilets. It causes profuse diarrhea and vomiting which can lead to death by intense dehydration, sometimes within a matter of hours.

Cholera has remained endemic in some Asian countries for centuries, has become endemic in an increasing number of African countries with epidemics throughout the years, and has recently returned to the Americas with on-going transmission in Haiti and the Dominican Republic.

Cholera is an acute intestinal infection caused by ingestion of food or water contaminated with the bacterium Vibrio cholerae. It has a short incubation period, from less than one day to five days, and produces an enterotoxin that causes a copious, painless, watery diarrhoea that can quickly lead to severe dehydration and death if treatment is not promptly given. Vomiting also occurs in most patients.