Crohn's is going to be a part of my life forever and there will be better times. I need to just remind myself when times are tough that eventually they will be good again - Elizabeth Hebda 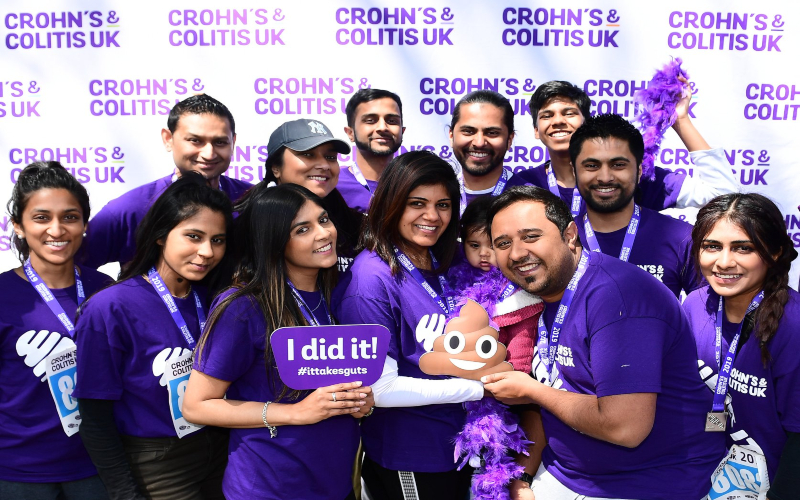 We’ve all said it before: “I won’t let IBD define me.”  Despite the sincerity of this statement, it is truly difficult to carry out.  There are times when we can’t avoid it and have to let others take care of us.  It mirrors what Stuart Scott said about his battle with cancer:

“And when you get too tired to fight, then lay down and rest and let somebody else fight for you. That’s also very, very important. I can’t do this ‘Don’t give up’ thing all by myself.”

But what about the times when we…

Stem cell therapy may be a viable new treatment option for Crohn's Disease. Studies have shown that stem cells may be able to greatly improve patient symptoms without the exorbitant recurring costs of traditional medications.

Stem cell transplants to be used in treating Crohn’s disease

Recent research has shown stem cell transplantation to be very effective in treating other autoimmune disease, such as multiple sclerosis. Our trial, called ASTIClite, will investigate whether transplantation can reduce gut inflammation and offer hope to people with Crohn’s disease for whom all other treatments have been unsuccessful. ASTIClite is a follow up to our previous ASTIC trial in 2015, which investigated a similar stem cell therapy. Although the therapy in the original trial did not cure the disease, we found that many patients benefited from the treatment.

These young people—including a dancing doctor!—have fun and crush stigmas as they educate others on life with an IBD.

Early, tight control of Crohn’s disease may have lasting benefits

Early approaches to treatment of Crohn’s disease followed a step-up algorithm in which the newer medications would only be used if the patient did not benefit from established therapies. This sequential approach — termed step therapy — has more recently been called into question, as studies have repeatedly shown that the newer drugs for Crohn’s disease are more effective than the old standards, and have preferable side effect profiles.

What It's Actually Like to Live with Crohn's Disease

I live on a diet of 30mg of Co-Codomol and 3mg of Budesonide capsules, but, because the steroid tablets no longer carry out their function and the pain persists, the hospital are starting me on Adalimumab injections, which helps to reduce swelling and pain by limiting inflammation.

Asking for help is something that can appear so much harder to do when you have Crohn’s Disease or any other form of Inflammatory Bowel Disease (IBD). I think that this is because IBD sometimes makes us creatures of extremes.

Treatment has been dominated by antitumor necrosis alpha agents with significant success but equally potentially serious adverse events. Therapeutic targeting of leucocyte trafficking has emerged as a viable alternative therapy, with vedolizumab being the lead compound. This review focuses primarily on its biological function as a selective gut immunotherapy, its safety and efficacy, and its emerging role as a mainstream therapy in managing IBD.

Why There’s No “Right” Way to Be Healthy

An imbalance in the gut microbiome – more “bad” bacteria than “good” – is known as dysbiosis, which is caused by environmental stressors, such as intestinal inflammation, antibiotics, or diet. Gut dysbiosis is believed to fuel Crohn’s disease and other diseases, but the mechanisms behind that relationship is not fully understood by researchers looking to strike a healthier, bacterial balance for patients.

Crohn’s disease is the most serious form of inflammatory bowel disease. Current treatments for the condition frequently fail to provide much relief, and people with the disorder often have to have particularly inflamed regions of their gut removed surgically.

Are You Ready to Swallow a Pill Full of Poop?

Scientists now know that the wrong balance of bugs in your gut—a delicate ecosystem that can collapse as you age, travel, or even take new medi­cation—can lead to all sorts of distress. Seres is one of the first startups aiming to design treatments that would manipulate the microbiome to repair bad guts and cure diseases.

Before He Died, Paul Allen Gifted $125 Million To A New Institute To Study The Immune System

How one man went from Dying to Thriving

Dane will tell you from experience being diagnosed with Crohn’s/Colitis is very scary and there are many things you will need to do including finding a doctor who specializes in this area. He will also encourage you to create a positive mindset and build your SHIELD. SHIELD stands for Supplements, Herbs, Imagination, Exercise, Lifestyle and Diet. Like the great Hippocrates stated, “Let food be thy medicine and medicine be thy food.” Dane is a testament to what food can do for us when applied correctly based on our individual and unique makeup.

I’m Chronically Ill With Crohn's Disease, But My Relationship Is Built On A Love Of Food

It’s definitely hard to make the “right” choices, especially when there isn’t some unified codex or diet of what people with Crohn’s should eat.

Stem cell transplants to be used in treating Crohn’s disease

Current treatments, including steroids, aim to suppress this immune reaction. In the last decade, there have been great advances in treatments including targeted biological therapies that can heal the gut. However, these treatments don’t work for all patients, and some who initially respond well may loose their response over time. If the stem cell transplant is shown to improve the symptoms and quality of life for patients with Crohn’s disease, this will be an important advance in treating the disease in patients who haven’t responded to standard treatments.

We’ve all said it before: “I won’t let IBD define me.” Despite the sincerity of this statement, it is truly difficult to carry out. There are times when we can’t avoid it and have to let others take care of us.

Just getting the fact out that it really is a serious disease and not just a “condition” is truly important, because misinformation makes it hard to develop empathy for a friend or partner with this disease. That said, here are 15 things that Crohn’s sufferers will endure that require understanding, patience, and support.

Leaving the Seat Down

A sometimes frank, sometimes straight up and sometimes humorous discussion about Crohn's and living with Crohn's. I have Crohn's, but I figure that it's just using my body, hitchin' a ride for a while....until something better comes along.

I started Caring for Crohn’s earlier this year as a way to reach out to those in similar situations to mine. There are lots of resources to support IBD patients but not many to support the caretakers. The purpose of the blog is to chronicle what its like to care for an IBD patient but also to educate others about Crohn’s Disease & Ulcerative Colitis and how these invisible diseases impact every aspect of our lives.

Support group and forum for Crohn's Disease, Ulcerative Colitis, and other IBD.

Seven years ago I was diagnosed with Crohn's/Colitis which left me nearly dead at 120 pounds on every drug imaginable! At one point I was on a feeding tube, chemotherapy, immunosuppressants and nearly dead. Now, I take zero drugs, gained 55 pounds of lean muscle, travel the world pursuing my dreams, and I want to show you how you can do the same!

forCrohns mission is to fund research that helps those with the condition today and contributes to finding a cure for Crohn’s disease in the future whilst making more people in the UK aware of the disease and its symptoms.

Hey there! I’m Sara (some people call me Sadie), a classy, sassy, female living life with Crohn’s disease, a j-pouch, intestinal dysmotility, and autoimmune arthritis. It is my goal to show others how to be positive, and to own their disease instead of letting it own them, while educating them about Crohn’s disease and ulcerative colitis (IBD) along the way.

This is my personal story about my specific Crohn's disease. I talk about poop a lot. I cuss occasionally and all pictures are completely jacked from the internet...probably illegally. I claim no rights to them.

Our goal is to bring awareness and education around Inflammatory Bowel Disease ( IBD ) The more we learn about how IBD, Crohn’s, and Colitis affect the millions of people diagnosed with it, the better chance we have of making a difference in their lives.

This project is about the adventures of a guy who loves to bicycle. I also happen to have Crohn's disease, and later complications from it, which required me to have emergency ileostomy surgery in July of 2009. I'm hoping to show that having guts doesn't require guts! And, that life with a chronic illness can still be pretty awesome, despite the challenges. And maybe, just maybe, in the process I'll make some sense of the happenings of my life.

The Specific Carbohydrate Diet™ has helped many thousands of people with various forms of bowel disease and other ailments vastly improve their quality of life. In many cases people consider themselves cured. It is a diet intended mainly for Crohn's disease, ulcerative colitis, celiac disease, diverticulitis, cystic fibrosis and chronic diarrhea.

The Crohn's & Colitis Foundation is a non-profit, volunteer-driven organization dedicated to finding the cures for Crohn's Disease and ulcerative colitis, and to improving the quality of life of children and adults affected by these diseases.

Living with a chronic disease like IBD can sometimes be discouraging, and you may feel embarrassed by your disease. Other times, contacting one of the IBD support groups or organizations listed below may be just what you need. You may take comfort in learning how other people with IBD are managing their condition.

The official website of Professor John Hunter - Everything you’ll ever need to know about IBD.

To cure Crohn’s disease and ulcerative colitis and improve the lives of children and adults affected by these chronic diseases.

Documenting the life of an IBDer, Non-profit Founder/President, Financial Advisor and Triathlete.

News From the Tail End

Elizabeth was diagnosed at a young age and has dealt with Crohns with positivity and maturity ever since. Now that she’s in college, she’s sharing her story of college life, support groups, and clinical trials - GBM

For anyone reading this feeling close to despair having tried everything to relieve their Crohn's symptoms, hope is out there!

The Bright Side of Crohn's

By bringing patients' stories to light and spreading knowledge of the IBD experience, we are all able to become "Poster Children" for our diseases, and spread awareness through telling our personal stories, educating others, and showing confidence despite chronic illness.

In this highly anticipated book, Dr Greg Plotnikoff and Dr Mark Weisberg show how to listen to your gut and to interpret symptoms as important messages that can help correct imbalances.

Moreover, when the researchers examined these bacteria and fungus, they found that the three microorganisms worked together to form a so-called biofilm—a thin, sticky layer of microorganisms—that attaches itself to a portion of the gut. This biofilm could trigger the inflammation that causes the symptoms of Crohn's disease, the researchers said.