Where in health am I? : Home / Health Cloud / Challenges / Gastrointestinal / Stomach / Peptic Ulcer

When I repress my emotion my stomach keeps score - Enoch Powell 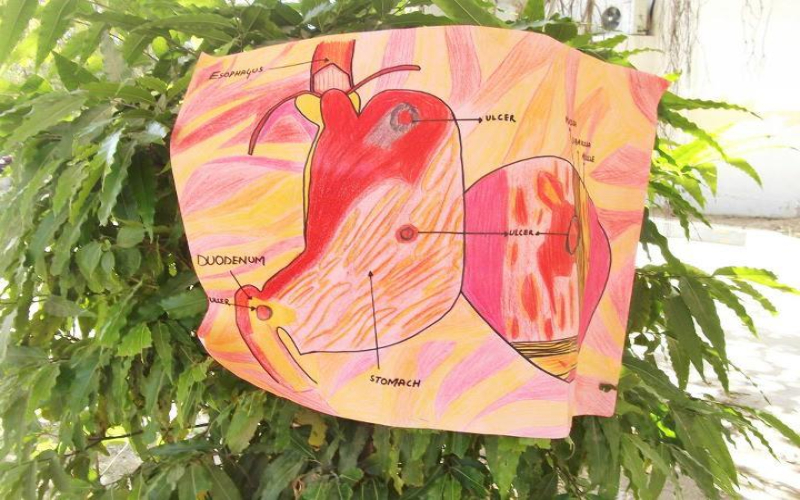 image by: Fight against peptic ulcer

Delayed Gratification: Why it Took Everybody So Long to Acknowledge that Bacteria Cause Ulcers

In 1983, Australian doctors J. Robin Warren and Barry Marshall isolated Helicobacter pylori, the bacterial cause of peptic ulcer disease (P.U.D.). However, decades passed before most doctors prescribed antibiotics to their afflicted patients.  Why didn't the medical community hit itself on its collective head?  After all, most bacterial diseases had been discovered a century before during Robert Koch's golden age of bacteriology. Why didn't doctors laud Warren and Marshall for their findings?

Why didn't long-term ulcer-sufferers champion Warren and Marshall's discovery that with a standard course of oral antibiotics, patients no longer have to swig antacid, feel guilty for…

Despite the fact that H. pylori is considered to be the cause of most ulcers, a significant number of people still get ulcers when there is no h. pylori present in their digestive system.

6 Things I Learned About Ulcers

Back in the 1980s, when doctors and most everyone else thought psychological stress or spicy foods led to ulcers, two Australian scientists discovered that the main culprit was actually a bacterium called Helicobacter pylori. That discovery eventually won them a Nobel Prize in 2005, and ushered in an era of using antibiotics to cure ulcers.

Is It an Ulcer or GERD?

These two common digestive health problems are easily confused. Find out how doctors can tell the difference.

Nobel Came After Years of Battling the System

When two Australian scientists set out in the early 1980's to prove that a bacterium, Helicobacter pylori, caused stomach inflammation and ulcers, they met opposition from a medical-industrial complex entrenched in the belief that psychological stress was the cause.

Some Ulcers Have an Upside

A new study has found that people who have Helicobacter pylori, an ulcer-causing bacteria in the stomach, also have a reduced risk of asthma, esophagus caner, and diarrheal disease.

Stress Doesn’t Cause Ulcers! Or, How To Win a Nobel Prize in One Easy Lesson: Barry Marshall on Being … Right

Peptic ulcers became more common in the 20th century, at the same time that these theories of Freud and other psychoanalysts became popular. And somehow those meshed, and this tradition emerged that ulcers were caused by stress or turmoil in one’s life. I don’t know where the data came from, but there was this idea that stress caused high acid levels; maybe there was a small amount of evidence for that, although I haven’t been able to find it when I’ve looked.

Delayed Gratification: Why it Took Everybody So Long to Acknowledge that Bacteria Cause Ulcers

In 1983, Australian doctors J. Robin Warren and Barry Marshall isolated Helicobacter pylori, the bacterial cause of peptic ulcer disease (P.U.D.). However, decades passed before most doctors prescribed antibiotics to their afflicted patients. Why didn't the medical community hit itself on its collective head?

All about gastric ulcers.

Peptic ulcer disease is the formation of ulcers in the lining of the stomach (gastric ulcer) or the first part of the small intestine, the duodenum (duodenal ulcer).

Ulcers have different symptoms and causes, but only endoscopy or an x-ray can determine if you have one.

PUD is a global problem with a lifetime risk of development ranging from 5% to 10%. Overall, there is a decrease in incidence of PUD worldwide due to improved hygienic and sanitary conditions combined with effective treatment and judicious use of NSAIDs. Duodenal ulcers are four times more common than gastric ulcers. Also, duodenal ulcers are more common in men than in the woman.

The most common cause of peptic ulcers is a stomach infection caused by a bacterium called Helicobacter pylori (H. pylori). This infection is quite common – about half of the world's population is infected with the bacterium but it doesn't always cause illness.

Although H. pylori infection usually doesn't cause problems in childhood, if left untreated it can cause gastritis (the irritation and inflammation of the lining of the stomach), peptic ulcer disease, and even stomach cancer later in life.

Peptic ulcer formation is related to H. pylori bacteria in the stomach and nonsteroidal anti-inflammatory medications (NSAIDs) in 50% of patients. For the remaining 50% there are miscellaneous or unknown causes.

The most common cause is infection with Helicobacter pylori bacteria. This is responsible for up to 90 per cent of all cases of peptic ulceration. The second most common cause is damage inflicted by painkilling medicines, such as aspirin (eg Disprin) or other non-steroidal anti-inflammatory drugs (NSAIDs, such as ibuprofen, diclofenac (eg Voltarol) or naproxen (eg Synflex)) used by many for arthritis, rheumatism, backache, headaches and period pain.

Peptic ulcer is a benign lesion of the gastric or duodenal mucosa occurring at a site where the mucosal epithelium is exposed to acid and pepsin.