Where in health am I? : Home / Health Cloud / Challenges / Heart / Devices / Implants / Valves

Okay, buddy, you’ve done a great job beating every minute of every day for this guy’s 80+ years. Time to take a break, I got this - Barbara Dehn 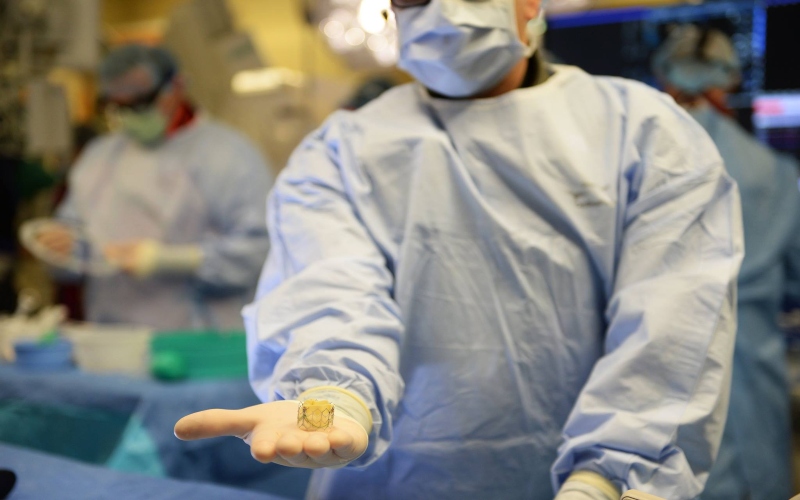 Imagine two experienced surgeons working side by side to replace a calcified, stenotic and tired aortic valve within a man’s heart without ever having to cut into the heart muscle. Imagine also, that unlike what was available in the past, this patient will not have to endure having his sternum or ribs broken to gain access to the heart that’s been pumping continuously, lub dub, lub dub, lub dub for over eight decades.

In fact, let’s stretch our imaginations and envision that this man’s heart will not even be stopped. Instead, it will be rapidly paced with a wire placed through a thin catheter placed in his neck vein. At the same time, another wire is threaded carefully up from his leg, through the narrowed and sometimes tortuous twists and turns of the femoral artery and the descending aorta, over which the valve is placed. Every millimeter of that route has been pre planned and mapped out in 3-D.

It’s not sci-fi. It is one of many Trans-catheter Aortic Valve Replacements (TAVR) done every day around the country. I have watched this in person; have seen a barrel-shaped fine mesh of Nitinol (Nickel Titanium Alloy) with three whisper-thin porcine valves arrive at the heart through a catheter like a parachutist hovering over the landing spot.

I like to think that the new valve is almost a like a Navy Seal, arriving on the scene, dropping in, as it were, fighting the constant pressure of the blood pumping up with each beat. I have an active imagination so — in my mind, anyway — the two valves talk to each other. “Okay, buddy, you’ve done a great job beating every minute of every day for this guy’s 80+ years. Time to take a break, I got this.”

The old, calcified valve is worn out and knows it’s time to lay back against the cardiac muscle and let the new CoreValve get into position. The surgeons, Dr. Ajanta De, interventional cardiologist and Dr. Pei Tsau, cardiothoracic surgeon know that this is a Gold-i-Locks situation. Not too high, not too low; every single aspect must be just right. Precision is a word I hear over and over. They have reviewed every aspect of this case ahead of time and then reviewed it again.

Also present is Dr. Christian Assad, the new endovascular fellow. Thanks to the collaboration with VitalMedicals, he is wearing a pair of ODG Smart Glasses, the next generation of virtual reality glasses currently being used by NASA and the Military to demonstrate how you can teach other cardiologists from around the country from within this Cardiac Catheterization Lab. In addition to working as an additional angiographic monitor, the glasses also have the capacity to work as a telemonitoring hub to show doctors exactly what he sees in real time.

This isn’t a sci-fi movie; this is real. Of course, here in the Silicon Valley an ample bit of genius tends to grease the skids between imagination and reality. Innovators and researchers are pushing boundaries and thinking different, especially when the Fogarty Institute for Innovation is across the street.

If they aren’t developing the next generation of medical instruments, valves, or devices, they are involving El Camino Hospital in clinical research in order to place them right here in the OR. My heart’s beating faster as I consider the interplay of technology and health care swirling around this team working to provide a very nice older man more time so he can see his grandkids graduate from college, dance at a few more weddings and maybe enjoy a few more rounds of golf.

Dr. De has already chosen a CoreValve that will be the perfect size. Precision is everything. She has to determine exactly how much of the valve must be in the heart and how much must be in the aorta. And, she has to ensure that the valve is attached within the heart at precisely the same angle as the patient’s current valve to prevent leaking and congestive heart failure.

Before Dr. De and Dr. Tsau deploy the new valve, they pump up a balloon to push the old valve back and out of the way. They are pacing the patient’s heart fast now, so that the blood pressure drops. Now they can guide the new valve into it’s new home. Ready? The valve is opened partially, the angle is checked, the height, the depth. Double check. Triple check. All good? All Good! I see nods. Then it’s time. They open the valve.

Am I the only one holding my breath? Then I hear the collective exhalations. They look, they check, they check again. Yes, it’s good, it’s good! The valve is perfect. I watch the new valve on the ultrasound monitor. Three little whisper thin leaflets, delicate as a moth’s wing, yet strong enough to open and close just from the pressure created by this man’s own heart beats. Lub dub, lub dub.

The future is here

It’s almost unbelievable, in the past, replacing the aortic valve meant a long recovery of at least 9 -12 months before a person felt like themselves again, yet this man got a new valve in a few hours from a catheter passed up through his leg. He’ll be home in about three days and when he gets there, he’ll be able to walk across his living room without having to stop and reach for a chair to steady himself and take a few deep breaths like he was climbing Mt. Everest. He’ll be able to participate in life and not watch from the sidelines.

It’s only 9:30 a.m., and we’re all donning lab coats, heading to medical offices to see our scheduled patients. I can just imagine everyone considering all the possibilities for the next levels of improvements that will continue steadily because, it’s just another day here in Silicon Valley where medical device innovation continues regularly like a beating heart, lub dub, lub dub. You can count on it. And if it does stop, well, they’ve got a pacemaker for that.

A Revolution for Heart Valve Jobs

A sudden outbreak of teamwork among doctors could boost healthcare performance.

For the past five decades, artificial heart-valve designs have evolved to successfully replace natural valves, which often begin to leak or harden over time.

Clot Risk Is Seen in Some Heart Valves

The FDA and cardiologists warn about animal tissue devices that have been widely used for decades.

Engineering heart valves for the many

Doctors have discovered a potential problem involving implanted heart valves that hundreds of thousands of people have received - they don't always open and close properly, possibly because a blood clot has formed that could raise the risk of stroke.

Today we can pick a variety of heart valve prostheses from our surgical supply shelves. They come in different sizes and designs to fit the individual patients’ needs. The main disadvantage is that patients who received a mechanical valve will have to take blood thinners for the rest of their lives to prevent the formation of dangerous blood clots. This is a necessary and important therapy because normal blood tends to form clots when it is in contact with an artificial surface.

These new valves still have significant technical problems to overcome. The good thing about technical problems, though, is that they are solve-able. And the idea of replacing a valve in a much less invasive manner looks as if it really is on the right side of history.

“Available information suggests that patients who had valves or prosthetic products implanted are at higher risk of these infections,” the CDC said in a statement.

Replacing a Heart Valve Without Opening the Heart

It’s almost unbelievable, in the past, replacing the aortic valve meant a long recovery of at least 9 -12 months before a person felt like themselves again, yet this man got a new valve in a few hours from a catheter passed up through his leg.

A human donor valve is the least common choice and it’s most often used for someone who is suffering from an illness that affects the valve, such as infective endocarditis. A donor valve can be expected to last 10-20 years.