Where in health am I? : Home / Health Cloud / Challenges / Heart / Devices / LVAD

Hope lies in dreams, in imagination, and in the courage of those who dare to make dreams into reality - Jonas Salk 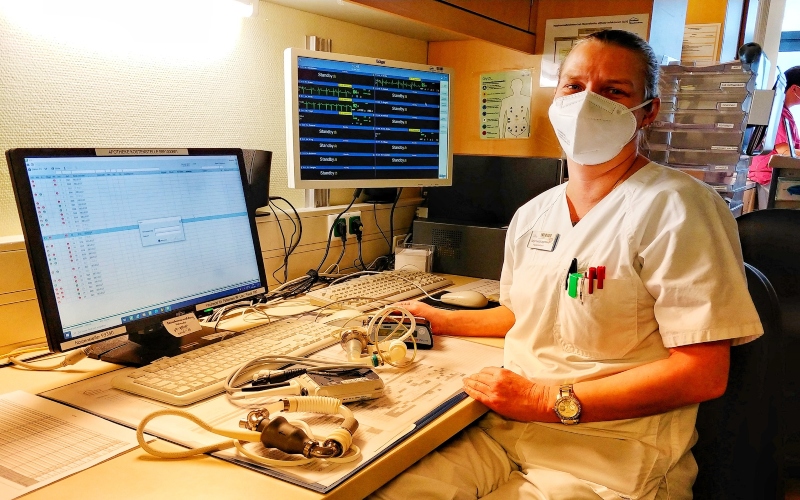 Rain splattered, blurring my view of the Massachusetts state highway. The rental car’s wipers squeaked as they dragged across the windshield. Though I was briefly tempted to turn back, I kept driving. The man with the battery-operated heart had invited me to his home, and I didn’t want to be late.

I am a critical care doctor. Throughout the course of my training, I have learned how to manage a ventilator, how to treat sepsis, how to sort out the causes of renal failure. But what I didn’t learn is what comes after for those who do not die, whose lives are extended by days, months, or even years as a result of our cutting-edge treatments and invasive technologies, which is what led me to Van Chauvin — the man with the battery-operated heart — and his family that rainy Sunday afternoon.

I had met Van a few weeks before as he trundled through heart failure clinic, a sight in a camouflage vest to carry his battery packs, controller unit along his waist. His doctors had directed me to him. When I told Van that I wanted to learn more about life with a partial artificial heart (called a ventricular assist device, or VAD), he smiled incredulously and, with a chuckle, invited me to his home to see what living with a VAD was really like.

Later that day, I had talked with Van’s doctors. They explained to me that Van had initially undergone the surgery to place the VAD with the hope that the device would just be a step on the way to a heart transplant. But Van’s lungs, weakened by years of smoking, got sicker as he waited on the transplant list — and shortly before we met, Van had learned that he was no longer a candidate for a heart. This device, with all its cords and tradeoffs and the possibility of complications, would be the way Van would live until he died.

As I drove, I wondered what Van would tell me about what it had been like to learn that he wouldn’t get a new heart. Maybe he regretted the decision he had made to get the VAD, knowing now that he would never again be able to shower the way he liked, or to go fishing lest the machinery get wet. I wondered if he would be angry, resentful of his current reality.

So I was surprised when I walked into Van’s home (I finally made it, despite the rain and a few wrong turns) and found myself in the midst of what felt like a family gathering in the living room. Van’s sisters had stopped by, as had a niece, one of his daughters with her chubby-cheeked son, even his mother. They wanted to tell me about Van. I didn’t even recognize him at first, as he stepped out from the kitchen with a smile and a steaming tray of potatoes, chives, and sour cream he’d whipped up for the company. “Grab a plate!” he said, beckoning me in. First we would eat, and then we would talk.

Over the course of that afternoon and the many phone calls that followed, I came to understand that I had been wrong about Van. I met him because I wanted to learn what it was to live a life that I perceived as a state of limbo. I thought that the very obvious reminders of living with a battery-operated device — carrying battery packs and sleeping plugged into a wall socket — might have been untenable. But Van told me that he wasn’t angry at all. Once he learned that he was no longer a transplant candidate, he was able to come to terms with his life for what it was. And a big piece of that process of adaptation meant finding ways to do the things he enjoyed, even if he needed to bend the rules.

The summer after we met, which would be the last summer of Van’s life, he even fixed up a boat to take out on the lake near his home. His voice lifted when he told me about the afternoons he spent on the water, catching fish and enjoying the sunshine. In one of our last conversations, he’d invited me to come out with him. I had smiled and thanked him, thinking maybe next summer, assuming there would be time. Though I will never fish with Van, I will remember the lessons he taught me. Van had priorities other than survival, other than living as long as possible. And contrary to what I had assumed, as long as Van could find ways to regain the independent life that his heart failure had taken from him, he could tolerate the cord that connected him to the wall each night. Rather than feeling tethered, as I had assumed, Van found a way to be free.

The Man With the Battery-Powered Heart

In some ways, a VAD is nothing more than another implantable device, much like an insulin pump for diabetics or a cochlear implant for the deaf. I know the heart is just a muscle, and I have held a cadaver’s still heart in my hands and felt its inanimate weight. And I know, too, that as time passes, VADs will become smaller, as devices do, and one day they might be no clumsier than pacemakers.

These patients are super-complicated, luckily I got Zack Shinar, MD from Sharp Memorial in San Diego to try to wade through the morass.

The LVAD: Walking, Talking … and Pulseless

You walk into your next code and it’s a man in his 60s who collapsed on his way to his cardiologist’s office. His wife insists that he doesn’t need CPR because he has a kind of artificial heart, an LVAD. No one in the department has ever seen a patient with one of these before.

As the number of patients with refractory heart failure grows, so too does the likelihood that patients with a left ventricular assist device will present for emergent care.

The new technology allows for real-time, remote monitoring of implantable devices, years of added life for patients, and flexibility to travel without a physician nearby.

If the Tin Man Actually Had a Heart, It'd Look Like This

A robotic heart points the way to a future where soft robots help us heal.

Because problems with VADs can be life-threatening, families need extensive training in managing the device and its external controller at home.

The device kept him alive, but was the pain and suffering worth it?

Robert and Beverly Stanford, who live outside Houston, volunteered to tell us their story as part of a research project we have undertaken to help patients decide whether they should undergo treatment. LVAD can save lives, but doctors don’t know how many complications might be expected for those who suffer from other conditions as well.

These days, doctors keep a heart pumping blood with something called a ventricular assist device. This is a pump external to the body that helps ferry blood around when the heart just can’t manage on its own. Problem is, because blood is flowing through machinery, the patient has to take blood thinners to make sure the works don’t get gummed up. And doctors don’t like putting people on blood thinners if they can avoid it. This new robot is incorporated right into the heart, and acts to encourage the organ’s normal function.

This soft robot hugs your heart to help keep it pumping

A team lead by engineers at Harvard University is testing a silicone sleeve that slips over the bottom of the heart like a cocoon, then inflates and deflates to squeeze the heart and give it a powerful beat. Proof-of-concept studies showed that the soft robot restored normal blood flow in six pigs whose hearts had stopped.

When the Body Fails, Tech Takes Over

The left ventricular assist device (LVAD) has gone from being a bridge to a heart transplant to a long-term therapy option. An LVAD helps the heart pump blood to the rest of the body, thereby taking a lot of stress off of the heart.

Jackson was leaning on her Stanford doctors to find a way to get her back in the water. She asked her cardiologist, Dipanjan Banerjee, MD, to consider allowing her to swim in a wetsuit. Banerjee did her one better. It had become apparent to him that she could be one of that small percentage of LVAD recipients whose heart recovers after the rest that the LVAD gives it and who no longer need the device. -

As I drove, I wondered what Van would tell me about what it had been like to learn that he wouldn’t get a new heart. Maybe he regretted the decision he had made to get the VAD, knowing now that he would never again be able to shower the way he liked, or to go fishing lest the machinery get wet. I wondered if he would be angry, resentful of his current reality.

At MyLVAD our mission is to help improve the quality of life and outcomes for people living in the LVAD world. We hope to provide information, support, direction, and inspiration for those who live with LVADs.

In this blog, I wanted to show followers of this blog some of the latest treatment options available for sufferers of Congestive Heart Failure (CHF or otherwise known as HF).

From The Bottom Of My LVAD

What LIFE is like living with a partial Artifcial Organ/Heart Pump called an LVAD.

Living with an LVAD, a caregiver's perspective

For those just finding this blog now.... please read about my family & our nine month journey "living with an LVAD." I've since started a new blog: Living Post Transplant, a Caregiver's Perspective. The link is: www.livingposttransplant.blogspot.com

LVAD Inc and Beyond

Day in and day out, living with my Heartmate II

Our Life, Our Love, His LVAD

LVAD life may not be perfect, but my love for him is...

The first left ventricular assist device (LVAD) was performed in 1984 and since that time there is an increasingly growing population of patients with LVADs. This means ED physicians will be seeing more and more of these patients in the ED and should have a basic understanding of how these devices work and have an adequate understanding of common complications and an approach to evaluate these patients.

The LVAD is implanted during open heart surgery. The parts of the LVAD may vary based on the type of device but mainly, there are four basic parts...