Where in health am I? : Home / Health Cloud / Challenges / Heart / Heart Drugs / Amiodarone

The reputation of amiodarone spread far and wide—amiodarone, the word was, was a unique antiarrhythmic drug that almost always worked, and had virtually no side effects. Both of these assertions, of course, proved false - Richard N. Fogoros MD 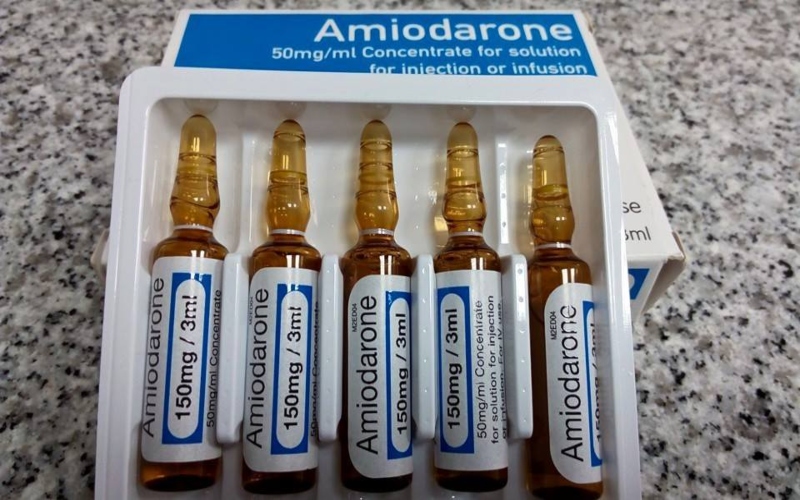 Background: Amiodarone is a class III antidysrhythmic first released for human use in 1962. As with other drugs in this class, amiodarone acts by blocking potassium channels thus prolonging the action potential. This, in turn, leads to a lengthening of depolarization of the atria and ventricles. The drug spread rapidly through US hospitals as it was touted as “always works, and no side effects,” by it’s pharmaceutical manufacturer (Bruen 2016).

Of course, nothing comes free and soon after the drug became widely used, a multitude of adverse effects became apparent. These included minor issues – sun sensitivity and corneal deposits – to major ones – thyroid dysfunction…

The Strange History of Amiodarone

Clinicians from all over the world (except in the United States) quickly began using the drug to treat cardiac arrhythmias of all sorts. The reputation of amiodarone spread far and wide—amiodarone, the word was, was a unique antiarrhythmic drug that almost always worked, and had virtually no side effects. Both of these assertions, of course, proved false.

Amiodarone, a versatile class III antiarrhythmic drug, is considered one of the most effective agents in counteracting supraventricular and ventricular tachyarrhythmia. The drug, however, has a high toxicity profile involving diverse organs.

Amiodarone and the “dizzy” ­patient

Beware of neurotoxicity, among other side effects, when treating patients with amiodarone. Patients will typically complain of tremor, but also “dizziness” as an umbrella term for an unsteady gait. There are various levels of the nervous system where amiodarone can impair ambulation...

Amiodarone Side Effects Can Be Life Threatening

Amiodarone side effects can be lethal. That is why it is imperative that this drug be monitored carefully. Lung toxicity can be irreversible!

Bilateral vestibulopathy (BVP) is a debilitating disorder characterized by the hypofunction of both vestibular end organs or nerves. The most frequent identifiable causes of BVP are ototoxic drug effects, infectious and autoimmune disorders. However, the majority of cases remain idiopathic. Very recently, the first discovery of a clinical case of Amiodarone-associated BVP has been reported.

Amiodarone: Most Effective and Most Toxic

Amiodarone (Cordarone) is considered one of the most effective antiarrhythmic drugs, but it’s also one of the most toxic. It may affect your lungs, eyes, thyroid, liver, skin, heart, and nervous system. Also, amiodarone has a long half-life. It is retained in the body for up to 45 days after the drug has been discontinued. Many Electrophysiologists (EPs) considered it a drug of last resort or a drug that should only be used for a short time. (Cardiologists in general prescribe amiodarone more readily than EPs.

What Is It, How Does It Work, What Is It Used For, Side Effects, and More

The most common adverse effects of amiodarone include nausea, vomiting, weight loss, bluish-grey discoloration of the skin, hypothyroidism or hyperthyroidism, liver disease, and photosensitivity. In addition, amiodarone can often deposit in the cornea (transparent outer covering of the eye), making it appear translucent or opaque. Fortunately, this side effect is reversible once the medication is stopped and may not cause any significant vision problems.

Given that we have better options for stable AF and VT cardioversion and that we have more important interventions to focus on in cardiac arrest, amiodarone should not be routinely used for any of these indications.

Amiodarone is generally considered a class III antiarrhythmic drug especially with prolonged use and results in lengthening of the action potential. It also has activity similar to class I agents...