Although it has been shown to save lives in an emergency, heart attack, there is no data to support the contention that it will increase your life expectancy when compared with being managed with just medications alone - Alice Park 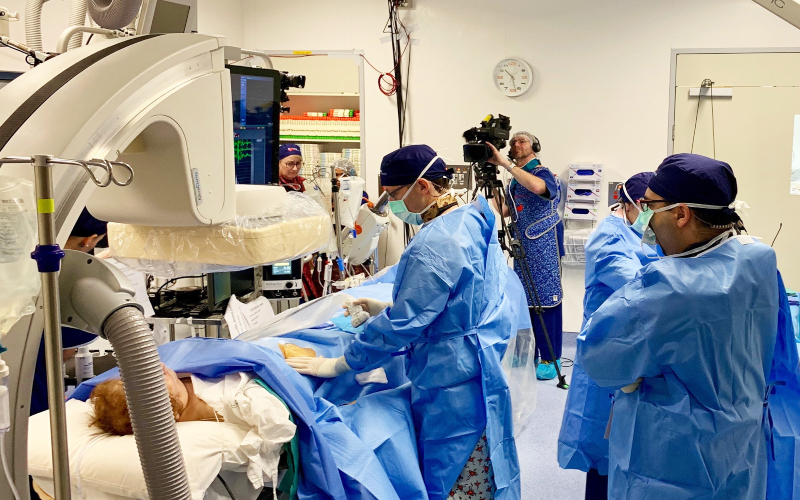 image by: The Alfred

The COURAGE study reported in 2007 that angioplasty and inserting stents, or PCI (percutaneous coronary intervention), provided temporary relief from angina, but did not result in fewer deaths, myocardial infarction or cardiovascular events than medication and lifestyle changes. The OAT clinical study indicated that for high-risk patients with…

After 40 years, millions of procedures, and billions of dollars, doctors are questioning whether a common procedure is doing more harm than good. How much does heart disease depend on a patient’s state of mind?

Findings showed that there was not a significant difference in the QOL in patients with PTCA before the procedures and 3 months after enduring them.

The CorPath FDA-approved system has a "cockpit" with a control console which lets the cardiologist control the movements of the guidewires, stent catheters and balloons used in the procedure. The entire cockpit has a radiation shield around it to protect the doctor.

What's the difference between angioplasty and coronary bypass surgery?

If your arteries are partially or fully blocked, you have a couple of options. The first is called angioplasty and it's preferred by about one-third of all CAD patients

Welcome to the Web's most extensive independent source of information on angioplasty for patients and professionals -- now celebrating our 10th year online. Our mission: provide substantive support; present the latest news on treatments and technologies; be a forum for discussion of controversial issues in medical innovation.

Balloon angioplasty (percutaneous transluminal coronary angioplasty or PTCA) is widely used for treatment of the blockages of coronary artery disease. This procedure is relatively simple, with only a small incision in the groin needed to introduce the equipment. As shown above, the balloon is inflated to compress the plaque and enlarge the artery, and provide an adequate area for blood to flow through.

The heart is supplied by three major coronary arteries and their branches. Atherosclerosis produces discrete (confined) or scattered areas of blockage within a coronary artery. When the blockages are large enough, they reduce blood supply to heart muscle and produce angina. The tests used to make the diagnosis of coronary artery disease and its medical treatment have been discussed elsewhere. Some patients with coronary artery disease may require surgery.

PTCA is a nonsurgical procedure that relieves narrowing and obstruction of the arteries to the muscle of the heart (coronary arteries). This allows more blood and oxygen to be delivered to the heart muscle.

Angioplasty with vascular stenting is just one way to treat narrowed or blocked arteries. Medications and exercise are often the first step in treating atherosclerosis. Regardless of which artery is blocked, angioplasty does not reverse or cure the underlying disease of atherosclerosis.

Coronary artery disease (CAD) affects almost 1.3 million Americans, making it the most common form of heart disease. CAD most often results from a condition known as atherosclerosis, which happens when a waxy substance forms inside the arteries that supply blood to your heart.