The Impella not only changed my life, it saved my life along with the incredible medical staff I had taking care of me - It gave my heart the option to rest and eventually recover - Adrienne Nastari 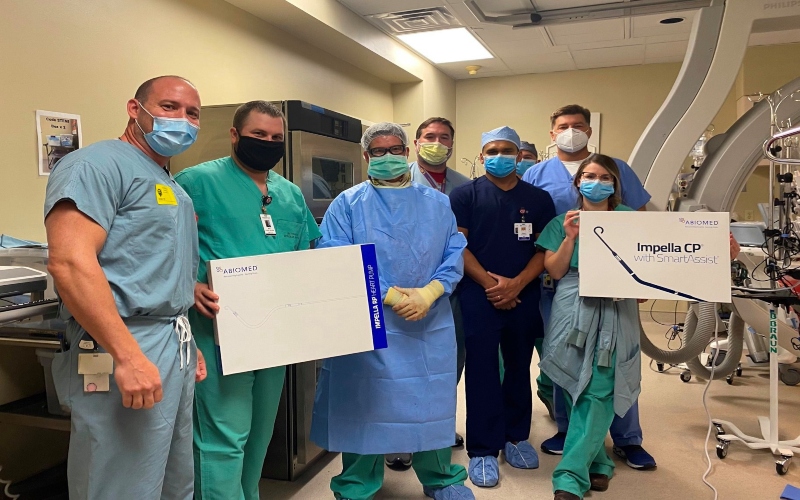 To RCT or Not to RCT? Impella Debate Pivots on How Best to Study Patients on the Brink of Death

A patient presents to the emergency department with acute MI and quickly takes a nosedive, just as the cath lab is gearing up for urgent PCI. Cardiogenic shock can’t be ignored: the heart races, blood pressure drops, breathing is a struggle, and the organs are starved of oxygen. Without some sort of intervention, the woman or man on the table may lose consciousness. Without action, they will almost certainly die.

It’s a rapidly changing scenario that unfolds minute by minute, sometimes even within seconds. Clinicians continue to grapple with how to make choices in that life-or-death moment, when the patient is fading in front of them and there are a range of tools at hand. Yet, as…

The Impella has been placed in more than 50,000 patients’ hearts, though we still have no randomized controlled trial data on its efficacy. Each device costs roughly $25,000. I replied, “I think a device such as an Impella will always be underutilized until there is a randomized controlled trial which shows improvements in hard clinical outcomes.” Was the company interested in doing an RCT, I asked. I never heard back. After a device has reached the market, companies have little incentive to do a high-quality trial. Why risk a study showing that your device’s benefit doesn’t exceed its harms when cardiologists are already implanting it?

The Impella 5.0: A Brief Overview

The quest to find the most suitable treatment modality for cardiogenic shock is far from over. Data on the current available percutaneous ventricular assist devices are still very limited but is continuing to grow.

A key future development will be decreasing the size of the Impella catheters so that they can be inserted percutaneously through smaller sized arterial sheaths. This will likely lead to a reduction in vascular complications and make the procedure more widely acceptable to operators. It is likely that there will soon be increasing adoption of a strategy of early Impella placement in the treatment of patients with cardiogenic shock, as proposed in the National Cardiogenic Shock Initiative. In turn, it is hoped that this strategy will result in improved survival.

The Impella Heart Pump: a Bridge to Recovery from Cardiogenic Shock

The Impella devices have only been around for the past decade, but there is already a substantial amount of evidence on their effectiveness. Initial studies looked at the Impella 2.5 and found that while it improved hemodynamic flow in patients, it did not confer any additional benefit compared to an intra-aortic balloon pump, while being substantially more expensive.⁴⁻⁵ However new data on the Impella CP and Impella 5.0 pumps are much more convincing.

The Impella is a bridge therapy. It is installed to address hemodynamics until a more permanent solution can be found. The manufacturer, Abiomed, mentions that Impellas should be used only for six hours, though many intensivists use them for days at a time.

The very notion of the small, minimally invasive Impella pumps is a great advancement, says Vest, but Christine’s application was “exciting and new” because the right-side Impella pump only became available within the last year, for which Vest gives major kudos to her colleague. “Dr. Kapur is involved in the development of these devices and has championed the concept that it’s not enough to think about the left side of the heart,” which receives oxygenated blood from the lungs and pumps it to the body.

Several mechanical circulatory assist devices are used to treat critically ill patients requiring hemodynamic support during post-myocardial infarction or cardiogenic shock. However, little guidance is available to choose an appropriate device to match a particular patient's needs. An increased understanding of hemodynamic effects of the pump systems and their impact on myocardial pre-/afterload might help to better understand their behavior in different clinical settings.

After cardiac device saves her, she’s seizing each day to do what she wants.

How is the Impella® Heart Pump Different from an Intra-aortic Balloon Pump?

Before the Impella 2.5, we used a balloon pump inserted through the groin. Over the years, we learned that the balloon pump was not great at maintaining blood pressure and flow for high-risk patients. The heart typically pumps about 4 liters of blood to the rest of your body; balloon pumps can handle about 0.5 liters, but the Impella 2.5 can pump 2 to 3 liters. Our larger Impella devices can pump 3.5 to 4 liters.

Physicians weigh the efficacy, risk of the Impella pump

A months-long investigation by the FDA revealed that, with a couple of caveats, the Impella RP system was safe when used appropriately in the right patients.

Cardiologists in major U.S. medical centers are taking part in the national cardiogenic shock initiative. That study is evaluating the best way to use a tiny pump as wide as a straw to keep patients alive.

Mortality in cardiogenic shock patients remains high. Short-term mechanical circulatory support with Impella can be used to support the circulation in these patients, but data from randomised controlled studies and ‘real-world’ data are sparse.

The Little Engine That Could: Impella® Device

Ron needed another Impella® device, the Impella® 5.5, designed to manage left-side ventricular failure. This pump pushes 5.5 liters of blood per minute from the left ventricle to the aorta and on to the rest of the body.

Tiny heart pump is a lifesaver

Before Impella, doctors would halt the procedure and perform CPR. But the small heart pump took over moving blood throughout the body, and doctors were able to finish the procedure without being rushed and without the patient’s body shutting down.

Earlier Impella implantation after cardiac arrest may provide cardiac support and tissue perfusion until recovery or high-risk PCI. The study supports the feasibility and safety of Impella-assisted percutaneous coronary intervention in high-risk patients with cardiac arrest.

To RCT or Not to RCT? Impella Debate Pivots on How Best to Study Patients on the Brink of Death