Where in health am I? : Home / Health Cloud / Challenges / Heart / Heart Screening / Monitoring

There are ways to prevent heart disease such as embracing a healthy lifestyle and there are diagnostic tools to monitor our hearts too, thanks to the work of two creative and persistent men, Norman Jeff Holter and Bruce Del Mar - Alison Oswald 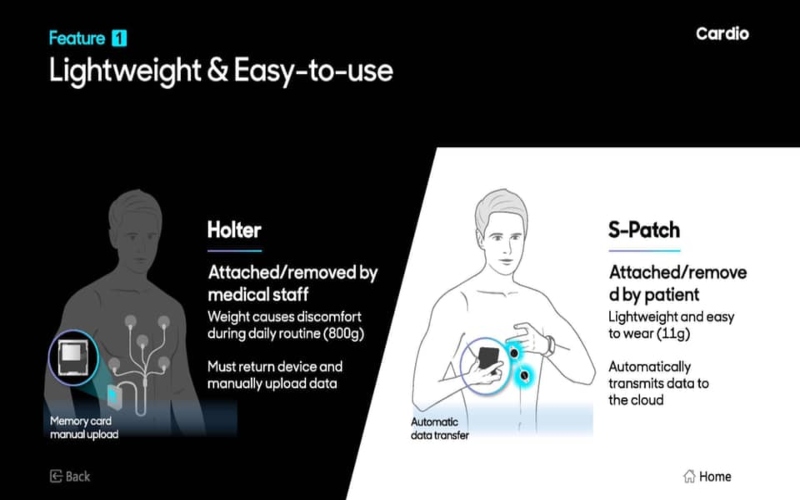 Norman Jefferis “Jeff” Holter was a pioneer in the field of ambulatory electrocardiography, and the inventor of the portable cardiac telemetry device that bears his name and is used worldwide to this day. He famously made a case for continuous ambulatory cardiac monitoring by comparing the collection of heart data with the work of a mining engineer, who “does not assay a mountain of ore by testing one rock.”

Jeff Holter’s words resonate with many physicians who have stood by the bedside of a patient with a suspected rhythm disturbance, only to have a benign-looking electrocardiogram on hand. As a single rock sample cannot reveal the riches of ore within a mountain because of sampling error, a single ECG may not capture a transient symptomatic arrhythmia. Holter’s invention revolutionized the field of diagnostic cardiology by providing a noninvasive way to record the heart’s electrical activity. His technological contributions have since paved the way for devices such as pacemakers and implantable cardiac defibrillators, which allow for management of unstable arrhythmias...

Jeff Holter was born on 1 February 1914 in Helena, Montana. He was a science enthusiast throughout high school, pursuing the study of chemistry at the University of Southern California in 1938 and the study of physics at the University of California, Los Angeles, in 1940. He earned a master’s degree in each field and had the opportunity to study nerve conduction testing with Dr Joseph Gengerelli of UCLA. Although he never pursued a medical degree, his foresight would eventually influence the practice of medicine by helping clinicians evaluate and treat cardiac arrhythmias.

During the Second World War, Holter worked as a senior physicist for the US Navy’s Bureau of Ships and conducted research on ocean wave characteristics. His contributions were many, including the development of amphibious operations. He also led a team of oceanographic engineers to Bikini Atoll to perform postwar atomic testing. His Operations Crossroads project looked into the effects of atomic explosions on underwater wave currents.

After the war, Holter returned to his hometown of Helena and founded the Holter Research Foundation, a personally funded scientific endeavor located at the back of the family hardware store. His work included further study and development of electrophysiological telemetry with Dr Gengerelli.

Years before the invention of the modern transistor, Holter succeeded in recording electroencephalographic information from a boy on a bicycle, Albert, with electronics considered large and crude by today’s standards. Due to the technological limitations of the time, the signal-to-noise ratio of encephalograms proved disappointing. The voltage of the heart was known to be significantly greater than that of the brain, providing a much more robust signal. In a move that was as ingenious as it was practical, Holter switched the electrodes from the head to the chest, and cardiac telemetry was born.

Holter’s first radio-electrocardiograph recording was made on a 38-kg device that was strapped on like a backpack (Figure). From a practical standpoint, the developing technology had a long way to go before it could be implemented clinically. Short transmission capabilities also limited radio broadcasting of telemetry data. A smaller tape recording device that was developed subsequently could be housed within a briefcase. For the very first time, a truly portable cardiac telemetry device was available. Holter ultimately refined the device, reducing it to a size of 19.5 × 9.8 × 4.6 cm and a weight of 1 kg. Realizing the potential benefit of such a monitoring device, Holter and his colleagues sold the patent to Del Mar Avionics, a well-known airline equipment firm that became the leading manufacturer of the device for over 40 years.6 With increased capital support from Del Mar, Holter was able to refine his invention into a practical clinical tool. The first reported use of ambulatory electrocardiography was in 1954, as published in the Canadian Medical Association Journal. Since that time, thousands of studies and case series have been published involving ambulatory electrocardiography.

The portability of the Holter monitor has since progressed to such an extent that the device now in use resembles a small music player rather than the original bulky backpack-type device of 1947. Today’s Holter is usually worn around the neck or around the waist attached by a belt, where it allows for patient monitoring during daily activities. This noninvasive monitoring can be achieved during a spectrum of activities, from restful sleep to extremes of exercise. Ambulatory electrocardiography continues to be used today primarily to investigate presumed or known cardiac arrhythmias, and is often ordered for patients with symptoms of palpitations or syncope. It is also used to evaluate response to pharmacotherapy for a given rhythm or heart-rate-related condition. Several formats and variations of ambulatory electrocardiography exist, including 24- and 48-hour monitoring, use of event recorders, and, more recently, use of implantable loop recorders that can last several years.

The type of ambulatory electrocardiography cardiac monitoring device chosen depends on the indication for evaluation as well as on the frequency of symptoms. If symptoms are daily, a standard 24- or 48-hour Holter monitor is usually sufficient. If symptoms are less frequent, such as weekly, an event recorder can be considered, since this allows a patient experiencing symptoms to initiate an electrocardiographic recording with the push of a button. Such a recording will document the cardiac rhythm shortly before initiation (due to the continuous loop recording algorithm) as well as during the symptomatic episode. Follow-up interrogation of the device, either by telephone or in a clinical setting, can then compare symptoms with the recorded cardiac rhythm to establish a diagnosis .

Newer technological advances have led to the development of subcutaneous implantable loop recorders that can be used when symptoms deemed to be low risk occur only a few times a year. Implantable loop recorders operate continuously for up to 3 years, and can be interrogated transcutaneously at any time using a portable computer interrogator, much like that used for pacemakers.

The presence of ischemia may also be detected using ambulatory electrocardiography by evaluating for ST-segment changes and abnormalities. However, ST-segment analysis based on ambulatory electrocardiography is neither sensitive nor specific for evaluation of ischemic heart disease. If ST-segment abnormalities coexist with ischemic symptoms, further risk stratification and evaluation should be undertaken...

How Cardiac Arrhythmias Are Diagnosed

Ambulatory monitoring (Holter monitoring and event recorders) is done to record a patient's ECG for a prolonged period of time, on an outpatient basis. The purpose of ambulatory monitoring is to look for evidence of transient cardiac problems - that is, problems that come and go, and that are not apparent when a standard ECG is performed.

What I Learned While Wearing a Heart Monitor

After the exchange of a few emails, my doctor ordered an at-home, 30-day heart monitor. It’s a marvel of modern technology. Electrodes on my chest fed my heart’s rhythm, over wires, to a recorder on my belt, which wirelessly communicated the data to my physician. With onboard software, it continuously monitored for signs of a heart attack. As amazing as this technology is, it wasn’t amazing enough. The wires tickled my torso and puffed out my shirt.

Holter Monitoring and Loop Recorders: From Research to Clinical Practice

Loop recorders are event recorders with a ‘loop memory’: they continually analyse the ECG and retain information pertaining to relevant arrhythmias that are automatically detected thanks to predefined algorithms and the registration of the ECG a few minutes before the onset of the arrhythmia.

Should Your Watch Monitor Your Heart?

Apple’s new watch can screen for heart problems. But doctors are increasingly worried about the dangers of testing healthy people for disease.

The Partnership at the Heart of Heart-Monitoring Technology

There are ways to prevent heart disease such as embracing a healthy lifestyle and there are diagnostic tools to monitor our hearts too, thanks to the work of two creative and persistent men, Norman "Jeff" Holter (1914-1983) and Bruce Del Mar (b. 1913-).

A Holter monitor is a continuous tape recording of a patient's EKG for 24 hours. Since it can be worn during the patient's regular daily activities, it helps the physician correlate symptoms of dizziness, palpitations (a sensation of fast or irregular heart rhythm) or black outs.

Rapid advances in technology to monitor atrial fibrillation (AF or Afib) are enabling clinicians to access real-time patient data more easily and effectively than ever before. The challenges of obtaining data through previous technology like Holter monitors have limited the clinician’s ability to better understand AF burden and its connection to increased stroke risk.

Wearable Health Monitors: Do They Work?

The explosion in smart devices—phones, watches, fitness gadgets and the like—has unleashed a wave of apps designed to manage chronic illnesses, detect behavioral diseases and manage pain. Most recently, Apple announced that apps due later this year will allow its Series 4 watches to perform electrocardiogram readings, or ECGs, and notify users of irregular heart rhythms. The problem for consumers is knowing which apps—if any—actually work.

What Is An Implantable Loop Monitor?

An implantable loop monitor is, as it sounds, a “paper clip-sized” device that can be implanted just underneath the skin, left of the breastbone. This device can serve as a literal continuous ECG-recording machine, recording a patient’s heart rhythm for up to 3 years. The biggest advantage of this system is for patients who have symptoms that are not that frequent—that is, patients who may present with syncope once every several months or even yearly, in which case short-term external monitors have limited utility.

What I Learned While Wearing a Heart Monitor

After the exchange of a few emails, my doctor ordered an at-home, 30-day heart monitor. It’s a marvel of modern technology. Electrodes on my chest fed my heart’s rhythm, over wires, to a recorder on my belt, which wirelessly communicated the data to my physician. With onboard software, it continuously monitored for signs of a heart attack.

Several formats and variations of ambulatory electrocardiography exist, including 24- and 48-hour monitoring, use of event recorders, and, more recently, use of implantable loop recorders that can last several years. The type of ambulatory electrocardiography cardiac monitoring device chosen depends on the indication for evaluation as well as on the frequency of symptoms.

Lightweight Holter monitoring for 24 hours to 14 days. The novi+ from ScottCare is the waterproof solution to monitor your patients, both big and small.

KardiaMobile is the most clinically‑validated personal EKG in the world. Now a medical‑grade EKG can become part of your daily routine. Enjoy the peace of mind.

Ambulatory monitors are small, portable electrocardiograph machines that are able to record the heart’s rhythm. Each type of monitor has unique features related to length of recording time and ability to send the recordings over the phone.

Holter monitoring gives doctors a constant reading of your heart rate and rhythm over a 24-hour period (or longer).