You're never going to get rid of all your LDL or its friends VLDL and IDL, but we can keep LDL from putting stuff everywhere by having a good ratio of HDL to LDL. The idea with the HDL and LDL ratio is that you need a balance: one cleans, one dirties - Gina Keatley 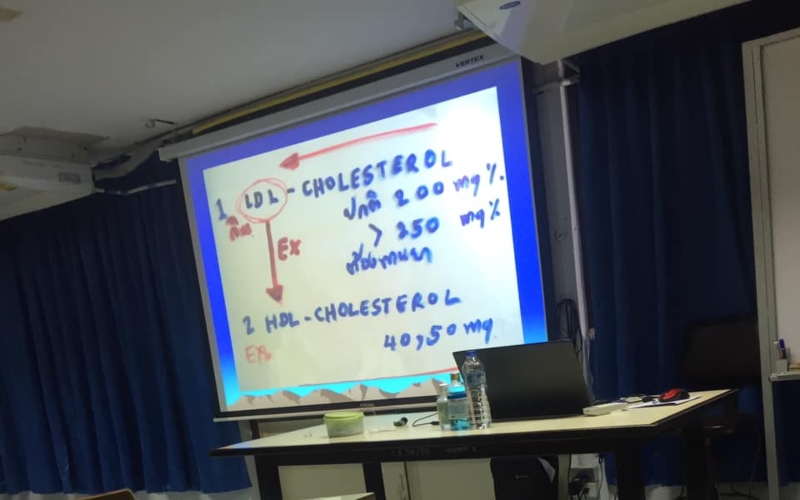 Cholesterol is complicated. While just reading the word conjures images of people eating fast food or clutching their hearts, cholesterol isn't inherently bad. When your levels are under control, it's actually a necessary and helpful part of your internal chemistry.

That's true even for so-called "bad" cholesterol, or the type associated with low-density lipoprotein (LDL) particles, says Michael Blazing, an associate professor of medicine at Duke. "LDL is nothing more than a truck that carries cholesterol around so that any cells that need it can get it," he says.

'Bad cholesterol' is only as unhealthy as its composition

New research shows that a particular subclass of low-density lipoproteins (LDL) is a much better predictor of potential heart attacks than the mere presence of LDL.

When ‘Bad’ Cholesterol Gets Too Low, Stroke Risk May Rise

LDL levels below 70 were tied to an increased risk of hemorrhagic stroke.

Those with a family history of early heart disease not only need to get tested for the usual risk factors of high cholesterol, high blood pressure, diabetes and smoking but also must make sure they know if their Lp(a) is high and get their children tested as well.

VLDL – The Role of Triglyceride-Rich Lipoproteins and Remnant Cholesterol

Lipoproteins are important biochemical substances whose main purpose is to carry lipids from one tissue to another. VLDL is produced by liver cells and is an important carrier of triglycerides (TGs) and to a lesser extent cholesterol. Once in the circulation, VLDL is broken down in capillary beds by an enzyme called lipoprotein lipase, releasing lipids, mainly TGs, for energy utilization by cells or storage in adipose tissue.

What is the difference between LDL and VLDL?

Bite Back At Bad Cholesterol: Eat An Avocado A Day

At the end of the study, the researchers found that the avocado diet led to significant reductions in LDL cholesterol, compared with the other two diets.

LDL-C does not cause cardiovascular disease: a comprehensive review of the current literature

For half a century, a high level of total cholesterol (TC) or low-density lipoprotein cholesterol (LDL-C) has been considered to be the major cause of atherosclerosis and cardiovascular disease (CVD), and statin treatment has been widely promoted for cardiovascular prevention. However, there is an increasing understanding that the mechanisms are more complicated and that statin treatment, in particular when used as primary prevention, is of doubtful benefit.

Having high LDL cholesterol places a person at a higher risk of developing heart disease if it is left untreated. But there are certain steps one can take to reduce or prevent high LDL levels. Of course, there are many cholesterol medications that can help lower LDL levels by varying degrees however, making therapeutic lifestyle changes can be a more active way of achieving and maintaining an improved LDL number.

Cholesterol levels predict if under-45s will ever have heart disease

A person’s cholesterol levels before the age of 45 can predict their lifetime risk of developing cardiovascular disease. The finding has prompted debate about whether younger people should be recommended preventative measures, such as taking statins. The result comes from an analysis of medical data on nearly 400,000 people of European ancestry from across Europe, Australia and North America. The study found that when blood concentrations of non-HDL cholesterol – often known as “bad cholesterol” – are higher than 145 milligrams per 100 millilitres before the age 45, a person’s relative risk of developing heart disease at some point in their life nearly doubles. For concentrations between 100 and 145 milligrams before 45, the relative lifetime risk increases by 10 to 20 per cent.

Cardiovascular disease is more complicated than just one risk factor. The people in this study had established disease, and it may be that reducing LDL, even to very low levels, cannot turn back time. At least in this study, it did not.

Attached to each LDL particle is a single molecule of a protein called apolipoprotein B100 (ApoB). And by determining how much ApoB is in the blood we can “count” exactly how many LDL particles are present. Determining LDL in this way is better than measuring the cholesterol stored inside, because ApoB has been shown to be a superior predictor of cardiovascular disease than measuring both LDL cholesterol and non-HDL cholesterol.

This cholesterol may be somewhat under the radar, but in reality it's a just-as-bad cholesterol hiding in plain sight. Produced by the liver, VLDL is composed of various lipoproteins and fat, just like LDL and HDL. But Mayo Clinic experts note that what sets VLDL apart is the degree to which it's composed of a type of fat known as triglycerides.

Cholesterol is complicated. While just reading the word conjures images of people eating fast food or clutching their hearts, cholesterol isn't inherently bad. When your levels are under control, it's actually a necessary and helpful part of your internal chemistry. That's true even for so-called "bad" cholesterol, or the type associated with low-density lipoprotein (LDL) particles, says Michael Blazing, an associate professor of medicine at Duke. "LDL is nothing more than a truck that carries cholesterol around so that any cells that need it can get it," he says.