Where in health am I? : Home / Health Cloud / Challenges / Stroke / Lower Your Stroke Risk

If you don't know your blood pressure, it's like not knowing the value of your company - Mehmet Oz 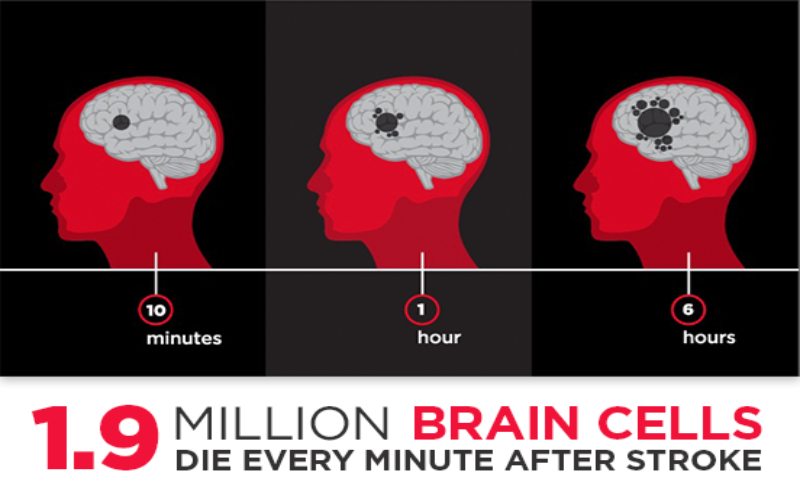 image by: Stroke Survivors Empowering Each Other (SSEEO)

The 2016 Chapman University Survey of American Fears gave me pause for reflection. Leading the list of what strikes fear into the more than 1,500 Americans surveyed was “corrupt government officials” (60.6% of respondents), followed by terrorist attacks (41%). Much farther down the list, only 20.3% reported “becoming seriously ill” as a cause for concern.

As a physician who spends her days caring for patients with strokes, or “brain attacks,” I wondered how many strokes we could avoid entirely if people feared brain attacks as much as they fear terrorist attacks. According to the Centers for Disease Control, more than 795,000 strokes occur in the United States each year. An individual’s lifetime odds of dying from a stroke are approximately 1 in 31, and stroke remains the fifth overall leading cause of death in our country. What are the lifetime odds of dying at the hands of a foreign born terrorist? According to the National Safety Council, only around 1 in 45,808.

A stroke is a permanent brain injury, resulting either from a blockage preventing blood from reaching part of the brain (ischemic stroke), or from bleeding occurring in the brain (hemorrhagic stroke). While rehabilitation can assist with improving a stroke survivor’s ability to function, the injury to the brain is not reversible. Skin cells may regenerate within a wound, but cells in the brain do not. Common stroke symptoms include, but are not limited to, weakness on one side of the body, numbness on one side, sudden visual loss, slurred speech, drooping on one side of the face, and/or difficulty producing coherent words/sentences.

May is National Stroke Awareness Month, a time during which amplified efforts take place to raise public recognition of the disabling and fatal impact that stroke brings. The good news is that most strokes are preventable, but this requires effort. Just because a patient feels well does not mean that high blood pressure should be ignored. Cigarette smoking is harmful to the brain and its blood supply, but quitting is tough and requires resolve. Diabetic patients with high blood sugar readings should take these seriously and work with their healthcare providers to bring these under control. High cholesterol measurements also warrant discussion between patients and providers.

There are three major educational points I wish to make during National Stroke Awareness Month, in hopes that we can join together to prevent strokes and the horrible aftermath they produce.

1. Atrial fibrillation is a type of irregular heart rhythm that can dramatically increase the risk for stroke. There are now a number of medications that can substantially lower the risk of stroke in these patients. If you have atrial fibrillation, it is critical that you discuss with your healthcare provider whether he or she recommends starting one of these medications.

2. Obstructive sleep apnea is another condition that places patients at higher risk for stroke, as well as many other disease processes that can also make a stroke more likely to occur. If you have obstructive sleep apnea, please work with your healthcare provider to find an effective way to control it. Your brain will appreciate it.

3. Stroke is not just a disease of the elderly. I frequently see patients in their 20s, 30s, and 40s presenting to the hospital with strokes. As frightening as it may seem, stroke also strikes during childhood. Tissue plasminogen activator (t-PA) is a medication that can help to dissolve blood clots when a stroke begins. Multiple studies have demonstrated that treatment with t-PA increases a patient’s chances of living independently three months after a stroke compared with those who do not receive t-PA. However, t-PA is only beneficial within the first 3 to 4.5 hours after a stroke begins, and every minute that passes decreases a patient’s chance of reaching that independent outcome. Regardless of age, when stroke symptoms start, the right call to make is 911. A person is never too young to have a stroke.

I remain much more fearful of having a stroke than I do of losing my life in a terrorist attack. Yes, national security is an important issue; however, as we battle threats that are much more likely to kill and disable Americans than terrorist attacks, let us place our fears where fear is warranted, and channel this energy into action.

Source: John Dodds MD, Call To Action: Americans Fear Terrorism More Than What Is Likely To Kill Them, The Stroke Blog, May 18, 2017.

This calculator is only valid if you have not already been diagnosed with heart disease or stroke.

A National Goal: Prevent a Million Heart Attacks and Strokes by 2022

There is already a well-established path to countering cardiovascular disease. All it really requires is the will of individuals and society to follow it.

Here are six steps anyone can take to reduce the risk and the danger of stroke...

Today's lab "reference" range (which I call "the dead and dying range") for fibrinogen is between 193-423. Most functional or optimal levels are being reported between 200 and 300. Most studies indicate that levels over 300 indicate a higher risk of myocardial infarction, stroke or vascular disease.

Although the researchers found a strong effect independent of other variables, the study was observational and cannot prove causality. Still, there are plausible reasons saunas might be protective.

Compared to people who don’t exercise much at all, those who engage in light to moderate physical activity, such as walking at least four hours a week or swimming two to three hours a week, may have less severe strokes, based on the findings of a new study.

Want to calculate your risk of heart attack or stroke? This new online tool will help

Ottawa researchers say their new online calculator can give an idea of a person's chance of having a stroke or a heart attack within the next five years.

Preparing the Brain for a Stroke Before It Occurs

With further research, it’s at least possible that doctors could one day use such a treatment on high-risk patients so that their brains are primed with new vessels in case something worse happens down the line.

10 Natural Ways to Prevent a Stroke

If you’re like most Americans, you plan your future. When you take a job, you examine its benefit plan. When you buy a home, you consider its location and condition so that your investment is safe. Today, more and more Americans are protecting their most important asset—their brain. Are you?

6 Ways to Lower Your Stroke Risk

7 things you can do to prevent a stroke

What can you do to prevent stroke? Age makes us more susceptible to having a stroke, as does having a mother, father, or other close relative who has had a stroke. You can't reverse the years or change your family history, but there are many other stroke risk factors that you can control—provided that you're aware of them.

A New Focus on Aspirin in Preventing Strokes

The drug may play a more important role than previously thought.

African American And High-Risk? 4 Ways To Prevent A Deadly Stroke

Stroke is the fifth leading cause of death in the U.S., striking every 40 seconds and claiming a life every four minutes. Contrary to public opinion, strokes are not just an elderly problem, and they certainly are not strictly a male problem. In fact, strokes skew toward women, claiming twice as many lives as breast cancer. One in five women will have a stroke in her lifetime. A closer look at the stroke demographics uncovers even more disconcerting facts about the disease. Regardless of age or gender, strokes impact African Americans more than any other racial population in the U.S. Why?

Many risk factors for stroke can be managed, some very successfully. Although risk is never zero at any age, by starting early and controlling your risk factors you can lower your risk of death or disability from stroke. With good control, the risk of stroke in most age groups can be kept below that for accidental injury or death.

Can Chocolate Decrease Your Risk Of Stroke?

Maybe life in Sweden is a bit sweeter--and tastes better too. In a recently published study in the journal, Neurology, a cohort of Swedish men (ages 49-75) eating higher amounts of chocolate had a significantly decreased risk of having a stroke, after accounting for other lifestyle variables. The study found that those men who ate the most chocolate had the lowest risk of developing a stroke over the 10 year study period.

How to Prevent a Stroke

Here are some things everyone can do to lower their chances of having a stroke–these things will also lower your risk of having a heart attack...

This guideline provides an overview of the evidence on various established and potential stroke risk factors and provides recommendations for the reduction of stroke risk.

Strategies to Prevent Another Stroke

It is easy to revert back to your old habits and continue to put yourself at a high risk for another stroke or heart attack. Take a few moments, meet with your doctor and start changing the way you live -- it just may save your life.

Stroke - Can We Turn It Around?

Not only is stroke incidence increasing but there is usually no effective treatment. In the meantime controlling the risk factors of high blood pressure, diabetes and weight may help decrease your risk

What can I do to prevent a stroke?

The risk factors for a stroke can be divided into two categories - ones you can't change and ones you can.

Call To Action: Americans Fear Terrorism More Than What Is Likely To Kill Them

I remain much more fearful of having a stroke than I do of losing my life in a terrorist attack. Yes, national security is an important issue; however, as we battle threats that are much more likely to kill and disable Americans than terrorist attacks, let us place our fears where fear is warranted, and channel this energy into action.

To prevent stroke, focus on improving these four areas...