Where in health am I? : Home / Health Cloud / Challenges / Stroke / Procedures / Thrombolysis / tPA

Of all of tPA's drawbacks, the most troublesome is its inadequacy against big clots, which can block large blood vessels at the base of the brain; they cause about 25 to 30 percent of all strokes - David Noonan 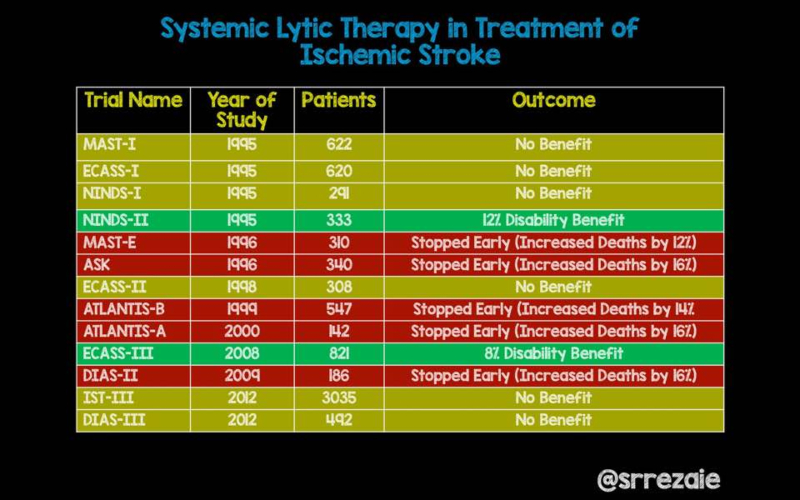 Tissue plasminogen activator (TPA) is strongly endorsed by major medical organizations to prevent brain injury after a stroke, yet up to 30% of eligible patients don't receive it—a situation that according to the New York Times' Gina Kolata stems partly from a vocal minority who say the risks outweigh the benefits. But some experts have voiced concerns about the Times' coverage of the debate.

Why TPA is endorsed by major medical societies

More than two decades ago, a large federal clinical trial showed that TPA can prevent brain injury after a stroke by opening up blood vessels that have been blocked by clots, Kolata reports. Both the American Heart Association and the American Stroke Association endorse TPA for eligible patients, and as Gregg Fonarow, a cardiologist at the University of California, Los Angeles explained, without the treatment, "many patients end up permanently disabled."

The treatment is not perfect. Patients generally must be treated within three hours of the onset of symptoms, and TPA carries a risk of brain hemorrhage. However, Kolata writes that rates of cerebral hemorrhage have dropped over the years as doctors have gained more experience.

"The stroke neurologists who are involved in chronic care see the devastating consequences" of not administering TPA, Fonarow said. "For some reason, the emergency medicine doctors are not factoring this in."

Still, a vocal minority opposes TPA, Kolata writes. They claim that TPA is dangerous and that the studies that found it useful were flawed.

According to Edward Jauch, a professor of neurosciences at Medical University of South Carolina, many of these skeptics get their word out via social media. "The way information and opinion is now communicated to the younger generation of physicians is much more through Web and social media and less through peer review journals, journal clubs, or live debates," he said.

One of the most prominent TPA skeptics is Jerome Hoffman, an emergency medicine specialist and emeritus professor at UCLA. Hoffman believes that both the initial trial of TPA and a later study were significantly flawed, saying that the treatment and control groups were dissimilar—and that those who received TPA had the least severe type of stroke. According to Kolata, many experts dispute this view.

Hoffman also points to 11 other studies that found that TPA was ineffective. Supporters say, however, that those studies were intended to examine other uses for TPA—whether it could be used for patients with more severe types of strokes, for instance, or outside of the recommended three-hour window. As such, the supporters say, the studies shed no light on TPA's widely recognized uses.

For now, the debate continues, Kolata reports. Scott Bisheff, an emergency medical physician at Sierra Vista Regional Medical Center in California, tells his patients that the benefits and harms of TPA are uncertain, and that it could potentially cause bleeding in the brain. According to Bisheff, about half of his stroke patients decline the treatment.

But several medical experts—including Hoffman—and medical journalists voiced concerns about the New York Times' coverage of the debate, arguing that it "portrayed this [treatment] as an area of settled science rather than one of lingering uncertainty," HealthNewsReview.org reports.

For instance, Samuel Vaillancourt, a specialist emergency physician and trauma team leader at St. Michael's Hospital, on Twitter pointed out how the Times coverage did not explain where it found the figure alleging that 30% of patients eligible for TPA do not receive it. HealthNewsReview.org added that the Times' coverage also did not mention that "no study conducted on TPA has found it saves lives, and some showed it increased mortality."

Furthermore, according to HealthNewsReview.org, the Times coverage did not acknowledge that all four of the experts in the story cited as TPA proponents "are affiliated with Joint Commission-accredited stroke centers, which attract patients with a range of services that include offering TPA." Nor did the Times coverage note that while AHA has endorsed the treatment, six of the nine members on the AHA panel that recommended the treatment had ties to a manufacturer of the treatment, and AHA as an organization continues to receive funding from TPA manufacturers.

Citing his own concerns about the Times's coverage, Dan Mayer, a retired professor of emergency medicine at Albany Medical College, said TPA "is an area for shared decision making rather than doctrinaire pronouncements on either side" (Kolata, New York Times, 3/26; Jaklevic, HealthNewsReview.org, 3/30).

Source: NYT calls this a 'gold-standard' of stroke treatment. But some experts are pushing back, Advisory Board, April 4, 2018.

Provides inclusion/exclusion criteria when deciding to use tPA on a patient with acute ischemic stroke.

Is the tPA-for-Stroke Debate Over?

Given the prevailing medicolegal climate in many states, coupled with the institutional interest in stroke center certification and the growing reach of telestroke services, holding out as a conscientious objector to the use of tPA grows ever more perilous.

Patients with ischaemic stroke 4·5–9 h from stroke onset or wake-up stroke with salvageable brain tissue who were treated with alteplase achieved better functional outcomes than did patients given placebo. The rate of symptomatic intracerebral haemorrhage was higher with alteplase, but this increase did not negate the overall net benefit of thrombolysis.

Going Beyond the 4.5-Hour Window for Thrombolysis in Stroke

In 2015, five landmark clinical trials in short succession showed that treatment did not need to be limited to early administration of t-PA in some patients and that intra-arterial mechanical thrombectomy within 6 hours of stroke onset further improved outcomes in patients with large artery occlusions of the proximal anterior circulation. Two years later, two other clinical trials extended the window of benefit for treatment with mechanical thrombectomy to 24 hours after stroke onset.

The prematurely halted EXTEND trial suggests benefits can be seen in patients who present within 9 hours or who wake up with a stroke.

Stroke Care: A Balanced Approach to the tPA Debate

The question of the safety and efficacy of alteplase (tPA) for the treatment of acute ischemic stroke (AIS) has been debated by emergency physicians (EPs) for many years. Differences of opinion have been expressed since the National Institute of Neurological Disorders and Stroke (NINDS) trial was published in 1995 showing that patients treated with alteplase were more likely to have little or no disability at 3 months compared to placebo.

Why the Go-To Stroke Drug Can Fail

The go-to stroke drug often fails. Now doctors can slide out brain clots with wires and have new tools for other blockages.

NYT calls this a 'gold-standard' of stroke treatment. But some experts are pushing back

The treatment is not perfect. Patients generally must be treated within three hours of the onset of symptoms, and TPA carries a risk of brain hemorrhage. However, Kolata writes that rates of cerebral hemorrhage have dropped over the years as doctors have gained more experience.