Where in health am I? : Home / Health Cloud / Challenges / Stroke / Awareness

Empower others to react, not regret - StrokeAwareness.com 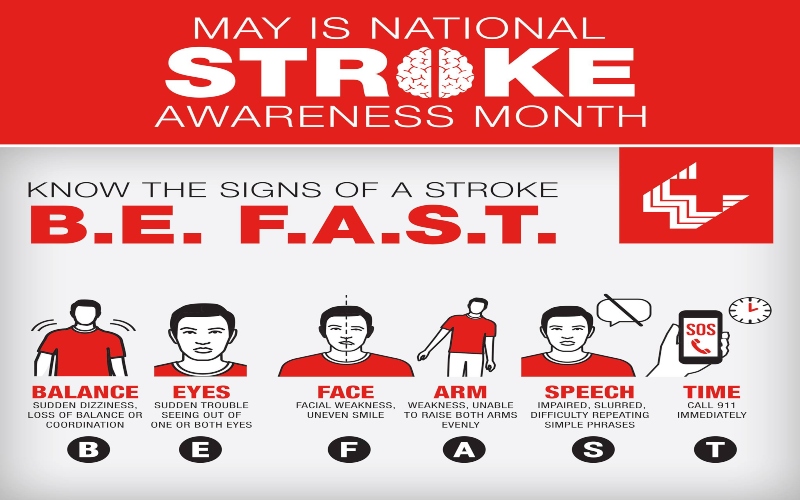 Imagine you are making dinner in your kitchen one night, and suddenly, your hand stops working. You try to call out, but the words won’t come. So, you try to walk to find someone to help you, and your leg on the same side as the hand that isn’t working doesn’t want to move either, which causes you to lose your balance and fall to the floor. Your body, which less than a minute ago was working just fine, now is betraying you with every second that passes. Such a scenario is the stuff of nightmares. And that is what can happen when someone has a stroke. One minute a person is perfectly fine, and the next, they are anything but fine. They only thing I can think of other than a stroke which can cause such an instant shift from fine to not is trauma—things like falls, car wrecks, violence. The thing about strokes though that make it so different from trauma is how people react. And that difference in reaction can literally make a difference between life and death, health and chronic disability.

This is what I mean by how people react so differently to trauma and stroke. Again, imagine you are in a car wreck. Once the car stops moving, most people start doing a mental inventory, the “am I okay?” As you are doing that mental inventory you try to move your fingers and your hand won’t work, you try to talk and the words won’t come, you try to move your leg on the same side as your injured hand and it’s not working either. If someone came to help at that point would you want them to call 911, or would you say, “let me see if it goes away” or “let me just take a nap for a little bit, I’m probably tired”? Sounds like a dumb question, right? Not only would you want someone to call 911, but anyone with you would probably take the decision out of your hands and call for you just seeing how you are not acting normally. Yet that is precisely what happens far to often with strokes. People get sudden symptoms and parts of their body stop working correctly, yet their reaction is not call 911. Its “let’s wait and see what happens.”

The main goal of stroke awareness campaigns is to stop that “wait and see”. Strokes need to be thought of like trauma, even if the symptoms are much milder than the ones I describe, even if it’s just one symptom, not several. Call 911 and get help quickly. Most strokes are very treatable if caught early, and by treatable, I mean near if not total reversal of symptoms. In other words, the hand and leg that weren’t working start working again, the words that wouldn’t come earlier are flowing again with their normal ease. The nightmare is over. I cannot say this enough, emphasize this enough, encourage this enough. Learn to recognize the signs of stroke and if you see them, in yourself or someone you love, call 911. Do not drive, do not call your doctor’s office and make an appointment, even if it is the same day. Call 911. A stroke is an emergency and needs to be treated as such. The window for treatment is small, about 3 hours from onset of symptoms, and because of that it is crucial that you get to a place where a stroke can be not just diagnosed but treated—which means a hospital emergency room. Getting to the emergency room needs to be safe and fast, and that means call 911.

Its easiest to remember the signs of a stroke with the acronym BE FAST. B is for balance, so a sudden loss of balance or sudden dizziness, E is for eyes. This means sudden changes, losses or disruptions in vision. F is for face, a sudden drooping, loss of sensation or numbness to one side of the face. A is for arms, a sudden loss of movement, or weakness in one arm or leg or the arm and leg on one side of the body. S is for speech. This can be garbled words, inability to speak at all, or words used incorrectly or difficulty finding words. Basically, a sudden change in speech in any form. T is for time. If you see any of the BE FAST signs, it’s time to call 911 and check the time, so you know when symptoms started and can communicate that to the EMS providers who answer the 911 call and the staff and physicians at the hospital.

Be stroke aware. Learn BE FAST, teach it to your loved ones. Even little kids can learn BE FAST and can learn to call 911. React to stroke symptoms the same way you would react to a trauma—seek medical care quickly so if your stroke can be treated you have the best chance of symptom reversal.

Source: Carol A. Cates, May is Stroke Awareness Month, Odessa American, May 3, 2021.

When Lauren Watson woke up in hospital aged 25, the only word she could say was "yeah", even if she meant no.

It's the hard-hitting advert that has graced our TV screens for nearly a decade. But the FAST campaign has failed to help patients recognise the signs of a transient ischemic attack (TIA) or minor strokes. Scientists discovered such patients who had seen the adverts were 13 per cent less likely to seek help within three hours than those who hadn't.

In a medical emergency, who in your social network will call for help quickest?

Delay in seeking treatment is a major reason for disability and death worldwide. Mass education campaigns to increase awareness have done little to change these numbers.

Most U.S. Women Wouldn't Know A Stroke If They Saw Or Felt One

The classic symptoms of a drooping face, speech difficulty or weakness or numbness in one of the arms can be signs of stroke, says Heidi Mochari-Greenberger, an epidemiologist at Columbia University and the study's lead author. That means your brain isn't getting oxygen, either because the blood supply is blocked or because a blood vessel has ruptured, But those aren't the only indicators. Lesser-known and more ambiguous symptoms can include a sudden onset of dizziness, severe headache or vision loss.

With Strokes, Knowledge Is a Lifesaver

About only one stroke victim in five who could benefit from t-PA receives it, primarily because people don’t realize a stroke is happening and wait too long to get to the hospital.

May is Stroke Awareness Month

The main goal of stroke awareness campaigns is to stop that “wait and see”. Strokes need to be thought of like trauma, even if the symptoms are much milder than the ones I describe, even if it’s just one symptom, not several. Call 911 and get help quickly.

The Scott Coopersmith Stroke Awareness Foundation is dedicated to connecting with those affected by stroke. Through community outreach, we raise funds to further the awareness of stroke in young individuals, encourage the rehabilitation of survivors, and provide emotional and financial assistance to survivors and caregivers.

Helpful information and education about stroke.

Get Ahead of Stroke

Get Ahead of Stroke is a national public education and advocacy campaign designed to improve systems of care for stroke patients.

The National Institutes of Health through the National Institute of Neurological Disorders and Stroke (NINDS) developed the Know Stroke. Know the Signs. Act in Time. campaign to help educate the public about the symptoms of stroke and the importance of getting to the hospital quickly.

Individuals can help prevent a stroke by making behavioral and lifestyle changes that lower their risk.