Where in health am I? : Home / Articles and Reports / Heads or Tails / Concussions and Sports: Can We Have One Without the Other?

Anybody can sustain a concussion, but those who engage in contact sports have an increased risk of repeated and serious concussions that can manifest as dementia in later life 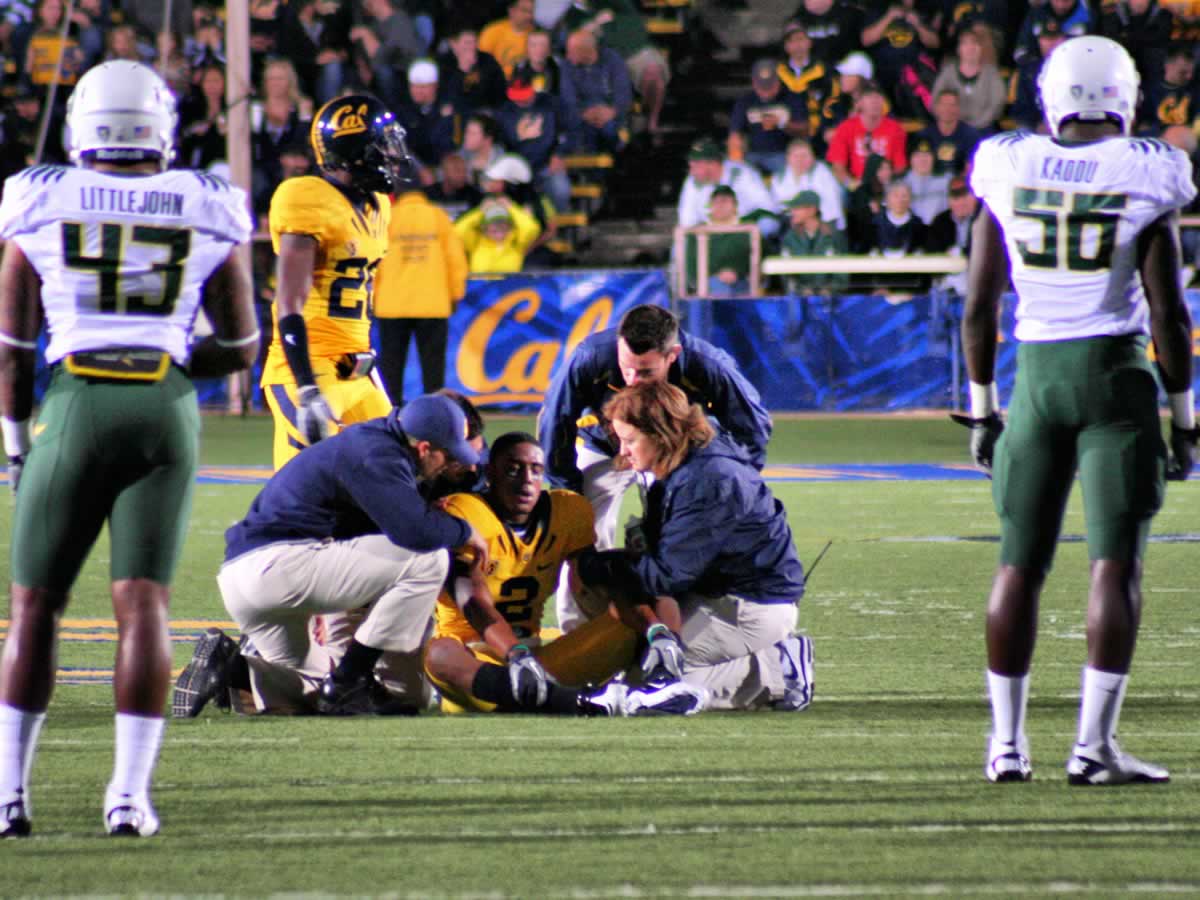 Whether you are a professional athlete, weekend warrior, or something in between - a sports injury is likely to occur sometime in your lifetime. But the biggest controversy in sport injuries, besides sudden death, drugs and spinal injuries is without a doubt concussions.

A concussion or traumatic brain injury (TBI) results from a blow or jolt to the head and can also result from simply a blow to the body that causes the head or brain to be jarred vigorously resulting in temporary disruption of brain function. Previously, concussions were considered a hazard in sports, something that athletes learned to live with. But, it's now clear the repeated concussions or head injuries can lead to CTE (chronic traumatic encephalopathy) which manifests as early dementia.

And it has now been determined that several high profile professional players who committed suicide in the past decade were suffering from CTE. About the same time a series of lawsuits were filed in 2011 against the NFL by both current and retired players who claimed they were not informed and were not provided ample protection against repeated head injuries that could lead to CTE. 1,2

In fact, a preliminary study in 2009 commissioned by the NFL showed a higher rate of dementia among retired players than in the general population -- about six times as high in players over 50 compared to other men in the same age group. And in 2012, researchers released a report stating that former NFL players are four times more likely than the general population to die from brain diseases like Lou Gehrig’s disease and Alzheimer’s.3, 4

Unfortunately, there is also evidence that concussions occur long before an athlete reaches the professional level. According to the Sports Concussion Institute, 5 to 10% of athletes will experience a concussion in any given sport season.5

On top of this a large proportion of concussions go undiagnosed and the onset of concussion symptoms may be delayed especially in young athletes. Even months later, the following symptoms can occur and recur:6

And it is more prevalent than we think. Here are some statistics from the Centers for Disease Control and Prevention (CDC):7

The leading causes of TBI in the U.S. civilian population, excluding data from military personnel are:8

According to the CDC, the risk for TBI varies with age with the most vulnerable groups being:7

Not surprisingly, professional sports and organized medicine has been consumed with a mission to decrease the incidence of concussions at both professional and amateur levels, so in the meantime which sports are the riskiest?

Football - American football is associated with the highest concussion risk for males (75% chance for concussion). A professional football player will receive an estimated 900 to 1500 blows to the head during a season. The impact speed of a football player tackling a stationary player is about 25 mph. This is despite the fact that football players wear protective gear, including a helmet. Linemen are especially vulnerable.

According to Robert Canu, co-director of the Neurological Sports Injury Center at Boston's Brigham and Women's Hospital: “Linemen who've had almost no concussions have the majority of cases of chronic traumatic encephalopathy, because on every play they get their brains rattled, trying to block with their head".

Hockey - Last year, the Journal of the Canadian Medical Association published the largest and most detailed analysis of concussions in the National Hockey League (NHL), covering 7 seasons from 1997 to 2004. The results showed a “total of 559 concussions during regular season games, working out to a concussion rate of 5.8 for every 100 players, or an estimated 1.8 concussions per 1,000 player-hours”. Centers seem to be at higher risk, with double the risk of concussion than wingers or defencemen.9

Soccer - is the most common sport with concussion risk for females (50% chance for concussion). The impact speed of a soccer ball being headed by a player is 70 mph. Unlike American football, soccer players do not wear protective head gear.

Boxing - The impact of the punch of a professional boxer has the speed of about 20mph. CTE has been studied in boxing, wherein retired boxers developed dementia at a higher rate and a younger age compared with the general population.10

There are other sports as well that present high concussion risks, including wrestling, basketball, many winter sports but the above mentioned sports are the most popular and are therefore the most studied in terms of TBI. It goes to say that almost any athlete can suffer from a concussion.

Finally after a prolonged period of stupor, professional sport is finally giving concussions the attention it deserves. The NFL has instituted new player safety programs, including one to benefit players who suffer head injuries during their careers, and in September 2012 donated $30 million to the National Institutes of Health’s Neurology Institute to study concussions and related brain injuries in football players and members of the military.

The NHL has adopted an in-game protocol designed to identify players with concussions and in 2012, it tightened rules on dangerous hits, especially hits to the head.11

This epidemic starts well before one participates in professional or collegiate sports. Here are things that still should be done.

According to Anthony Alessi MD, co-chair of the American Academy of Neurology's sports neurology section: “There's not usually a doctor on the sidelines at a high school football game to evaluate an athlete after a concussion. And most high school football teams don't have athletic trainers”.

Prescreening for prior concussions - Recognizing the importance of a concussion history, and appreciating the fact that many athletes will not recognize all the concussions they may have suffered in the past, a detailed concussion history is of value. Such a history may pre-identify athletes that fit into a high risk category and provides an opportunity to educate the athlete in regard to the significance of concussive injury.

Consistent RTP (Return to Play) issues - Following a concussion, how soon can a player return to the field remains an enigma. There are varying opinions on this, as well as conflicting evidence from research studies. Essentially there is no easy or right answer. Optimally, athletes under 18 should be treated more conservatively even though the resources may not be the same as for an older professional athlete.

In 2008, the 3rd International Conference on Concussion in Sport was held in Zurich, Switzerland which produced a consensus statement from sports medicine experts on managing sports concussions. The statement included recommendations on the diagnosis of acute concussion on the sideline, concussion in children and management and therapy. It also addressed the long-term issues:12

According to some studies supported by the NFL players can RTP even on the same day without a risk of recurrence or side effects. However, data from collegiate and high school showed that athletes may demonstrate neuropsychological deficits post-injury that may not be evident on the sidelines. In fact, in younger age groups, onset of symptoms is likely to be delayed.

The best available evidence suggests that complete rest exceeding three days is probably not helpful, gradual resumption of pre injury activities should begin as soon as tolerated (with the exception of activities that have a high TBI exposure risk), and supervised exercise may benefit patients with persistent symptoms.13

Continuing research – Besides developing better helmets more emphasis needs to be placed on studies that follow players who have sustained concussions. In this vein the Sports Laboratory Assessment Model (SLAM) 1 was used by researchers to monitor the effects of concussions on athletes.

Initiated by the University of Virginia, more than 2300 football players at 10 universities were assessed before the football season with brief neurocognitive tests. When a concussion occurred in these players, the same preseason battery was administered 24 hours, 5 days, and 10 days post injury.14

The results showed: Poorer neurocognitive test results during the 24 hour and 5 day assessments among those injured and after 10 days players who had sustained a concussion were performing at nearly the same level. However SLAM followed the athletes only on the short-term. What about the effects 1 year, 2 years, 10 years from now?

Meanwhile here’s what you (or your children) can do.

Concussions remain an integral part of contact sports with long-term consequences which can manifest years or even decades from now.

Know the risks. If you are not willing to run these risks for you or your child, then avoid contact sports. Now more than ever the appropriate management of TBI especially in teenagers and young adults is essential.

The Latest from Heads or Tails