Where in health am I? : Home / Articles and Reports / Cutting Edge / Medical ROBOTS: Innovation or Hype? 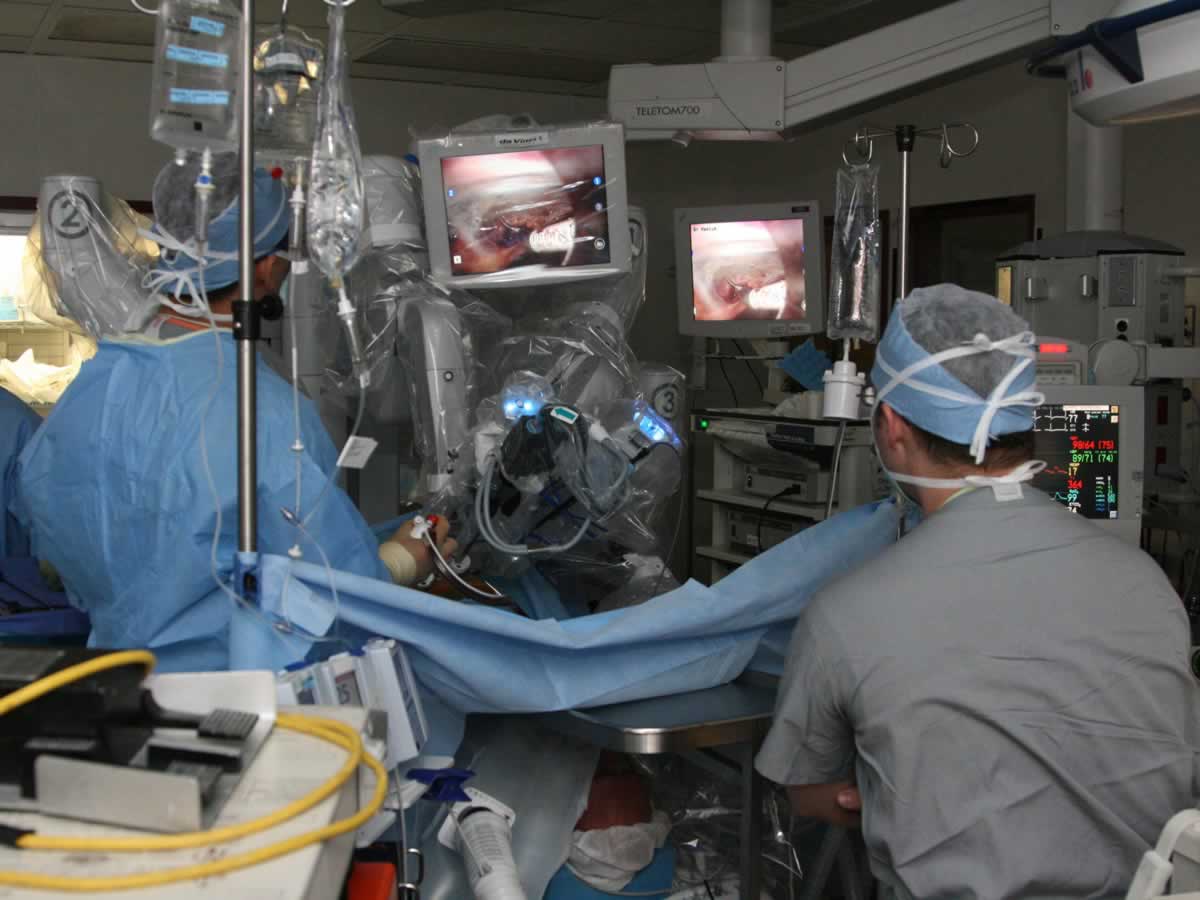 Robotics is nothing new. For decades it has been used in many industries, but not in medicine. In fact, there was a time when doctors considered the use of robots as "dehumanization of medicine." Nowadays, with patients becoming more technologically savvy, robotic-assisted surgery is actually in demand.

According to Dr. J. Cadeddu, a urologist at the University of Texas Southwestern Medical Center at Dallas: "Patients interview you. They say: ‘Do you use the robot? [No?] O.K., well, thank you.' " And they leave."  In fact, there has been a surge in robot-assisted prostate surgery. In 2002, less than 5000 robot-assisted prostate cancer surgeries were performed. In 2009, it was 73,000, accounting for 86% of all prostate cancer surgery performed that year.1

Of course the surgical robots of today do not look like the C3POs and R2D2s of the Star Wars era. Or Wall-E for that matter. They do not have human-like features and legs for locomotion nor do they speak in typical robotic monotonic voices. Instead, they have robotic arms that handle microsurgical instruments with doctors manning the controls.

The da Vinci was the first approved surgical robot. Although it's not a work of art or a new Dan Brown novel it may just be as valuable, with a 6-figure price tag. The da Vinci system is manufactured by Intuitive Surgical. The company originally had long-distance (telesurgery) in mind, but this idea, though feasible, is still not well-accepted. Initially, there were other surgical robots including the AESOP Robotic System and the ZEUS Robotic Surgical System but apparently they were unable to achieve market penetration.2

Da Vinci's fame as the primary robotic surgeon of our day is based on its ability to create smaller incisions which in turn leads to less invasive procedures, minimal blood loss, less pain and lower infection risk. The da Vinci also claims it is more precise than human hands holding surgical instruments, making microsurgery possible. Its "arms" can reach, cut and stitch in places where human hands cannot. As an example, by helping to preserve nerve function it minimizes the risk of impairing urinary and sexual functions which can be common complications of conventional prostatectomy.

At this point the da Vinci is primarily ultilized for gynaecologic and urologic procedures. But overall most hospitals and surgeons have not embraced this technology.3,4

So why is the da Vinci not as popular as the paintings or the novel of the same name?

Cost - The da Vinci carries a price tag between 1 to 2.5 million US$. To date, just over a 1,000 units have been sold, mainly to hospitals and clinics in rich countries. Even in these countries, only healthcare facilities with sufficient funds and high caseloads can afford to invest in surgical robots. Sometimes, this investment comes with some trade offs. Remember the Grey's Anatomy episode wherein the Seattle Grace Hospital could not hire additional nurses because funds were diverted to buy a Da Vinci unit? It resulted in overworked surgical nurses going on strike. Obviously, this can happen in real life.

Additionally robot-assisted prostate surgery costs about $1,500 to $2,000 more than traditional prostatectomy. And because Intuitive Surgical is the only company actively engaged in this field there is no competition to drive the price down.

Training - A robot is only as good as its operator. Currently, only a handful of surgeons are sufficiently trained to perform complicated robotic-assisted procedures. To be highly proficient, a surgeon has to perform 200 to 300 robot-assisted surgeries. Training also costs time and money, things that are not easily available. According to Dr. Douglas Murphy, a cardiac surgeon at St. Joseph's Hospital in Atlanta, there's no immediate financial incentive to do that [train in robotic surgery] since the reimbursement is the same. That means few surgeons -- let alone other members of the surgical team -- can afford to travel and observe an expert in action.

Slow innovation - Since its approval in 2000, the da Vinci hasn't evolved or improved much. Doctors complain that robotic surgery "isn't advancing fast enough or dropping in price quickly enough" as technology normally does. Some research-oriented surgeons are trying to innovate but get hindered by patents connected with the da Vinci system.

In comparison, several generations of mobile phones and personal computers have come and gone during the last 11 years. According to Jon Einarsson, a gynecological surgeon at Brigham and Women's Hospital in Boston, "people have been disappointed in how slowly the robot is evolving. There hasn't been a lot of evolution or improvement in the articulation at the tip of the instrument."

Some surgeons who tried out using the robot went back to their "old ways." Dr. Gerald L. Andriole Jr., chief of urologic surgery at Washington University, explains why: "I just think that in this particular instance, with this particular robot, there hasn't been a quantum leap in anything."

Slow operation - The da Vinci may actually be slower than most human surgeons. Compared to other micro precision instruments used in other industries, the da Vinci is clunky and bulky. Robot-assisted prostate surgery typically takes three and a half hours, twice as long as traditional surgery which also creates a bottleneck in the availability of surgical staff and ORs.

Unproven results - Critics say that by far and large, the outcomes of robot-assisted surgery – positive or negative – are not clear and the benefits championed by the company have not been convincingly demonstrated. Despite the large number of prostate surgeries performed to date, there are no published data from large studies." It is also not known whether robot-assisted prostate surgery gives better, worse or equivalent long-term cancer control than the traditional methods, either with a four-inch incision or with smaller incisions and a laparoscope. And researchers know of no large studies planned or under way."

Marketing hype - Recently, because of the increased demand for robotic surgery, more hospitals have invested in buying da Vinci units and use it for advertising their services. Critics feel there is just too much marketing hype going on and patients are not given accurate information in order to make informed decisions.

Man vs. machine - There are still purists who believe that medicine should be performed by human hands as opposed to robots performing surgeries which tend to "dehumanize" medicine. And the lack of face-to-face contact between doctors and patients in this age of telemedicine has been cited as another cause for the loss of empathy in medicine. However, there are many surgeons who would swear to the power of the robot. Those who embraced the technology and performed hundreds of robot-assisted interventions have become very proficient, and thus much faster than they used to be.

So, what's beyond the da Vinci?

It's obvious that the industry needs to evolve and already is. Other medical robots are being developed and tested with several Japanese and European companies in the forefront. These are not necessarily surgical robots but they represent the latest trend in using robots in health care.6

Some of these are:

Sofie - Operating Force-feedback Interface Eindhoven is a Dutch innovation that can perform surgery like Da Vinci but is still in the testing stage.

The CyberKnife Robotic Radiosurgery System is used to deliver a precise dose of radiation to tumors and cancerous cells with a high precision so that the surrounding healthy tissues remain undamaged.

Nursebot - This is a robotic nurse designed to deliver care to the disabled, the infirm and the elderly. The robot performs day-to-day care, thus allowing these patients to live at home.

RIBA -- Robot for Interactive Body Assistance – is designed to do the heavy job of lifting patients.

Paro is a robotic animal used for therapy for patients with neurological disorders (e.g. Alzheimer's). Paro is a seal but in principle can be any animal. It is trained to interact with humans.

Lokomat is a robotic physiotherapist used for rehabilitation of patients who suffered from stroke and other brain trauma.

Simroid robots - Unlike other robots, simroids do not deliver health care. Instead, it's perfect for interns to practice on by realistically mimicking "live patients' feelings of pain or discomfort."

Despite the hype, da Vinci does not live up to the genius it was named after primarily due to its limitations and excessive cost.

More importantly, there is currently no significant proof that the da Vinci makes a major difference in patient outcomes when compared to conventional surgery, although patients who have had a successful outcome and surgeons who advocate the procedure will disagree.

But, as more and more surgeons and research institutes become involved in research and innovation, it is just a matter of time before robotic technology moves in leaps and bounds. And, there is no doubt that the next generation of medical robots will be cheaper, quicker, sleeker and more versatile. As an analogy, the initial decoding of the human genome took years and cost billions of dollars. Now the process just take days to complete and is under the 1000 $ price range.

The da Vinci has become the harbinger for the emerging field of robotic medicine. Patients are ready and health care providers have to deliver. Let's have more Picassos.