Where in health am I? : Home / Articles and Reports / Cutting Edge / Vitamins - Do They Work?

Vitamin supplementation, except for vitamin D, does not reproduce the protective effect of natural food stuffs. So, why do we persist on taking them? 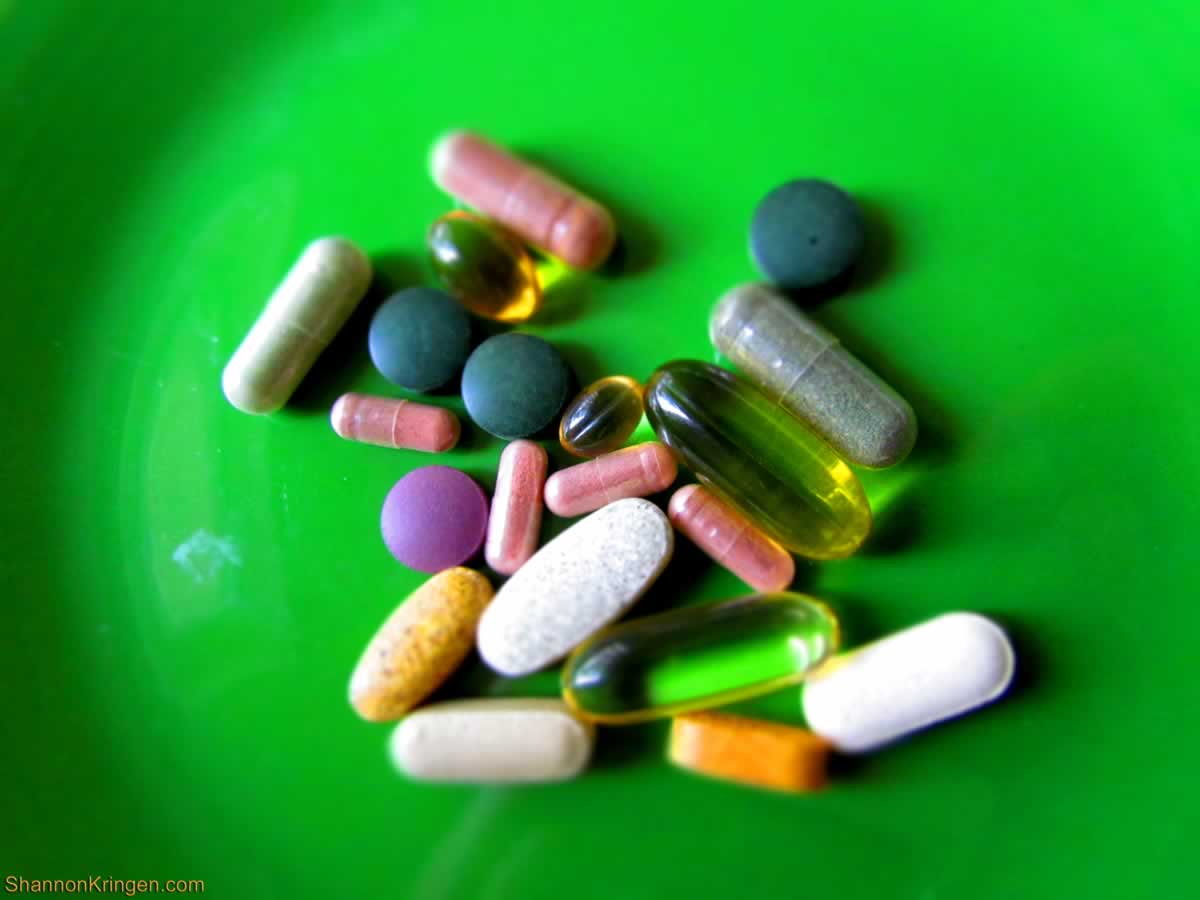 Vitamin supplementation is huge worldwide. Most of us take vitamins now or have taken vitamins in the past. The “global self-medication market” has become a multi-billion dollar industry and the dietary supplement sector is growing the fastest – 16% in 1998.

In the U.S., retail sales of supplements reached $11.3 billion in 2000. According to the Consumer Healthcare Products Association (CHPA) over 100 million Americans use vitamin and mineral supplements everyday. The National Health and Nutrition Examination Survey (NHANES III), 1988–94 reported that about 40% of Americans, starting at age 2 months, have taken some kind of dietary supplement.1

Antioxidant supplements are very popular among the health-conscious segment of the population, especially because of their convenience. Who wouldn’t go for a “power pill” which contains all the daily nutrients one needs? The typical individual working full time does not have the time to shop, peel, cut, and cook fresh produce. The antioxidant supplement pill fits in quite nicely in this era of convenience food and lifestyle on the go.

The most common supplements taken are:

Over the years, more and more reports on the health benefits of vitamin supplements have emerged, ranging from cardiovascular benefits to cancer prevention. This is mainly due to the 'antioxidant' properties of vitamins that can allegedly protect us from oxidative stress.3

But is this true?

Some of the latest studies reveal surprising results to say the least. In fact, most of the following evidence does not support the health benefits of vitamin supplements especially in the areas of disease prevention, prolongation of life as well as its taken for granted anti cancer and heart health benefits.

One of the very first studies to comprehensively investigate the health effects of vitamin supplements was conducted by Danish researchers in 2007. They performed a meta-analysis on data pooled from several clinical trials which used supplementation of the antioxidant vitamin A, vitamin E, beta-carotene, vitamin C and selenium used as stand-alone or as combination supplements to treat a wide range of health conditions, from cardiovascular disorders to cancer. Their results were a surprising, even troubling. For one, no benefits of these “antioxidant supplements” were found. Second, supplementation with vitamins A and E and beta-carotene (but not vitamin C and selenium) actually increased overall mortality. This study prompted other researchers to take a second look at the benefits of vitamin supplements.4

In a more recent review paper, the same researchers performed another meta-analysis of more data from several clinical trials, this time involving over 200,000 people who are healthy as well as those with existing health conditions. The researchers only considered studies which compared the efficacy of antioxidant supplements against placebos in the primary and secondary prevention of different medical conditions. The authors reported that they “found no evidence to support antioxidant supplements for primary or secondary prevention. Vitamin A, beta-carotene, and vitamin E may increase mortality”.5

Another meta-analysis investigated the anti-cancer properties of antioxidant supplements, particularly against gastrointestinal cancers. They looked at data of trials which studied beta-carotene, vitamins A, C, and E and selenium. The authors concluded that “we could not find convincing evidence that antioxidant supplements prevent gastrointestinal cancers”.6

One of the most recent developments in vitamin supplement research is the long-term SELECT (Selenium and Vitamin E Cancer Prevention Trial) study of the National Cancer Institute (NCI). The study evaluated the efficacy of selenium and Vitamin E in preventing prostate cancer and enrolled 35,000 male participants in the U.S. Puerto Rico, and Canada. The participants were randomly assigned to one of 3 groups: group 1 were given vitamin E supplements only, group 2 were given only selenium, group 3 took both supplements in combination, and group 4 were given placebos only.7

Five years into the study, the NCI decided to stop the trial because of some “concerning” findings. The analysis found no lower risk of prostate cancer in men taking the supplements, either alone or together. Men who were taking only vitamin E actually had a slightly higher risk of developing prostate cancer. Men taking only selenium seemed to have a slightly higher risk of developing diabetes.

A study published in December 2008 evaluated whether vitamins C and E and beta carotene supplementation have an effect on overall cancer risk. The data was taken from the Women's Antioxidant Cardiovascular Study and involved 8,171 women who were cancer-free at the start of the study about 9.4 years ago. The findings of the study showed that “supplementation with vitamin C, vitamin E, or beta carotene offers no overall benefits in the primary prevention of total cancer incidence or cancer mortality”.8

The Women’s Health Initiative Calcium/Vitamin D Trial evaluated the effects of vitamin D and calcium supplements on blood pressure and risk for hypertension risk of 36,252 healthy postmenopausal women. The women were assigned in 2 groups: one group received a daily supplement of 1000 mg of calcium plus 400 IU of vitamin D3 daily. The other group received placebo only. The researchers reported that “in postmenopausal women, calcium plus vitamin D3 supplementation did not reduce either blood pressure or the risk of developing hypertension over 7 years of follow-up”.9

The Physicians' Health Study II evaluated whether vitamin E or vitamin C have cardioprotective properties that can reduce risk for CVD in men. A total of 14,641 American doctors were enrolled in the study, aged 50 years and older, and were followed up for 8 years. The study results showed that “neither vitamin E nor vitamin C supplementation reduced the risk of major cardiovascular events. These data provide no support for the use of these supplements for the prevention of cardiovascular disease in middle-aged and older men”.10

This study evaluated whether antioxidant (vitamins E, C and/or beta-carotene) supplements can prevent atherosclerosis. The researchers performed a meta-analysis of 22 trials which involved 134,590 participants. The researchers conclude that “…the majority of studies included in this review does not support a possible role of antioxidant supplementation in reducing the risk of cardiovascular disease … no definite conclusion can be drawn to justify the use of antioxidant vitamin supplements for the prevention of atherosclerotic events”.11

Folic acid is routinely prescribed for pregnant women to prevent birth defects such as spina bifida. It has also been thought that folic acid, which reduced the levels of homocysteine in the blood, can prevent cardiovascular disease. Homocysteine is an amino acid used as biomarker for cardiovascular disorders.

However, on the other hand some studies indicate that vitamin D supplementation is worthwhile, even essential.

Vitamin D is unique because we cannot get our vitamin D requirements from food alone. Instead, vitamin D is synthesized by the body upon exposure of the skin to the sun, thus earning it the title “sun vitamin.” However, since the sun is said to cause skin cancer, people tend to avoid exposure leading to widespread vitamin D deficiency.13

Vitamin D is not only important for calcium metabolism and maintenance of bone health throughout life, but may also play an important role in reducing the risk of many chronic diseases including cancer and autoimmune disorders such as multiple sclerosis.14,15 And a review in Lancet Neurology in 2010 states, "vitamin D deficiency might be an important modifiable risk factor for MS." Whether vitamin D can help prevent cancer remains unanswered.16,17

Health experts are convinced of the necessity of vitamin D supplements and thus, routinely prescribe vitamin D supplements even for newborn babies. Milk and other dairy products in the U.S. are fortified with vitamin D but not in many parts of the world. Last year, the American Academy of Pediatrics updated its guidelines for vitamin D supplementation to recommend the doubling of the dose for babies and children from 200 IU to 400 IU per day.18

Unfortunately, except for vitamin D, the use of vitamin and mineral supplementation does not seem to reproduce the protective effect of natural food stuffs.

Worse, some studies even suggest that vitamin supplementation can actually increase risk for certain health conditions and mortalities. Most of the studies cited were long-term randomized, placebo-controlled trials involving thousands of participants. The data they presented are therefore, highly reliable.

It doesn’t look like a real healthy lifestyle and convenience can go hand in hand. When it comes to nutrition, there is no substitute for natural food stuff. But, maybe taking vitamin D isn't such a bad idea.