Where in health am I? : Home / Blogs and Commentaries / Celebrity Health / American Idol Hopeful Hospitalized

Casey Abrams typifies the increasing incidence of colitis and auto immune disorders in young people. Could it have anything to do with our modern way of living?

At a time when American Idol contestant Casey Abrams should be focusing on his vocal skills he’s dealing with major health issues instead. The singer, 20, was hospitalized and forced to miss last Thursday's elimination show due to a serious case of ulcerative colitis. 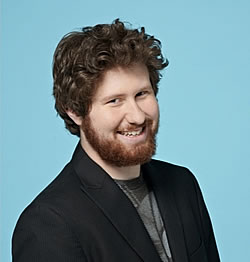 At the start of Thursday’s show, host Ryan Seacrest said to the audience, “You'll notice that Casey is missing from the group.  He is unfortunately sick and in the hospital right now. So everybody wave to him.  Feel better and get back here soon.”  Later, when Abrams was asked about his illness the bearded musician from Illinois said, “My stomach just wasn't in the right place.  I’m fine now.” And in an attempt to reassure his fans Abrams tweeted, “Hey guys.  Thanks for the well wishes. I got some nice fresh blood in me and I’m feeling better.  People at Idol & Cedars are treatin’ me real good.”

What Abrams suffers from - ulcerative colitis - is a type of inflammatory bowel disease (IBD) that causes open sores, called ulcers, in the rectum and colon. The ulcers form when chronic inflammation destroys the protective cells that line the surface of the colon, causing the stomach to bleed and produce pus and mucus (!). This results in severe cramping, abdominal pain, and chronic diarrhea.

Ulcerative colitis can be difficult to diagnose because its symptoms may be sporadic and are similar to many other IBDs. Ulcerative colitis usually starts with a progressively loose stool. The stool is usually bloody and may be associated with cramps, abdominal pain, and the frequent need to have a bowel movement. Patients may also have:  anemia, fatigue, weight loss, frequent fevers, lack of appetite, rectal bleeding, skin lesions, and joint pain.  Approximately half of the people diagnosed with ulcerative colitis have mild symptoms while others have more extreme symptoms that may eventually lead to arthritis, cancer, liver disease, and osteoporosis.

Many theories exist about what causes ulcerative colitis. One theory is that it’s an abnormality in the immune system, but doctors do not know whether these abnormalities are a cause or a result of the disease. Another theory is that it’s the result of “anti-bacterial overload.” This second theory is based on the increasing rate of children diagnosed with IBDs and other autoimmune disorders. Recently the Baltimore Sun ran a story about the increased rate of ulcerative colitis in children, “the number of children afflicted with colitis and Crohn's disease has increased 50% in the past decade.  About 1.5 million Americans suffer from colitis and Crohn's and about 10% of patients are under the age of 18.”

The reasons for the increase in diagnosis are not clear. But researchers believe something in the environment may be behind the rise in pediatric cases of colitis and autoimmune diseases. One theory is that as the developed world becomes more hygienic, the body becomes less able to fight off germs and bacteria, making it more vulnerable to autoimmune diseases in which the body mistakenly attacks its own cells and tissues.

Currently, there is no cure for ulcerative colitis. However, there are medical treatments available that help suppress inflammation. These medications allow the colon to heal itself thereby alleviating the symptoms of diarrhea, rectal bleeding, and abdominal pain.

Ulcerative colitis tends to come and go, with fairly long periods in between flare-ups where patients may have no symptoms at all. These periods can last months or even years although, unfortunately, symptoms eventually return. Fortunately though, most people with ulcerative colitis lead normal, active lives with few restrictions.

As for Casey Abrams, he’s out of the hospital and feeling better. The only thing he needs to worry about now is staying healthy so he won’t miss any subsequent shows and be forced to drop out of the competition.  He says, “My health is always first, but this is my dream, I'm going to keep fighting to stay in.”

Stacy Matson, a health enthusiast from Southern California, regularly blogs on Celebrity Health for A Healthier World, as well as contributing to the Best of the Best.