Where in health am I? : Home / Blogs and Commentaries / Celebrity Health / Autism & The Rain Man

About every 20 minutes, a child is diagnosed with an autism spectrum disorder making it more common than juvenile diabetes, childhood cancers and pediatric AIDS combined. Early diagnosis and intervention can make a world of difference

Autism is the fastest-growing developmental disability in the U.S. affecting 1 in 110 children (1 in 70 boys). Most children are diagnosed before the age of three. In an effort to increase Autism research and funding, April has been designated National Autism Awareness Month.

Autism is not a modern medical problem – for many years it was associated with Schizophrenia or thought to be caused by a cold, unemotional, mother. Sadly, (and not too long ago) children with autism were placed in institutions where they lived their entire lives. It wasn’t until 1977 that Autism was proven to have a genetic basis!!!  This complicated neurological disorder typically develops within the first three years of life and affects the brain's development of social and communication skills. It is often referred to as a “spectrum disorder” - a group of disorders with similar features.  And while one child may have mild symptoms another may have very serious symptoms – but they both have autism and are on the “spectrum”. Autism cannot be diagnosed with medical testing but through a series of interviews, observations and evaluations. Autism is four times more likely to develop in boys than girls.

Autism disorders have only recently gained mainstream acceptance and probably because of an increased representation in movies and books. Rain Man started the movement – everyone loves Raymond Babbitt, right? More recently though, television and movie studios have tackled the subject of Autism with characters on shows like Grey's Anatomy, Parenthood, Community, The Big Bang Theory and movies like I Am Sam, Forest Gump, and Adam.

And now every celebrity with an Autistic child is writing a book about their experiences with Autism from a parent’s point of view.  And a few others are coming forward and sharing their knowledge about diagnosis, medical findings, vaccinations, to name a few. When Holly Robinson-Peete and her husband, former NFL quarterback Rodney Peete, welcomed their first children - twins Rodney and Ryan - they never imagined that they would be dealing with an Autism diagnosis a few years later. Robinson-Peete says the initial shock was devastating to her family, “We grew apart then back together again since our son's diagnosis. It was rough going in the beginning. There was a lot of denial and miscommunication.  We had little hope ten years ago.”

One of the bigger challenges Robinson-Peete said was not in teaching an autistic child how to become an interactive part of the family but puberty.  "RJ is going on 13. Puberty plus autism? Challenging, even more than for typical adolescents. It can cause aggressive behavior and depression. Big transitional hurdle. Another thing you don't read too much about. We are seeing some regression which is not fun.  But he is verbal, affable, he has friends and plays team sports - all of which we were told he'd never do."  Both Robinson-Peete and her husband have written books about their parenting experiences and are in the process of opening an Autism facility for low income or uninsured children in Los Angeles. 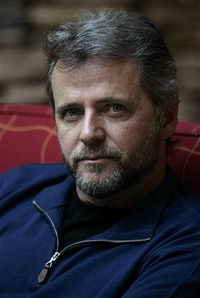 Actor Aidan Quinn has an Autistic daughter and says, "The incidence of Autism has gone up 500% since my daughter was diagnosed and I'm sure that over-immunization was the cause in her case. She went into convulsions after being immunized.  I know the pain and the grief and the difficulty, and not just to my own immediate family but to my extended family - so every time I see a person I know even glancingly who is pregnant, I say, 'Please, look into the immunization thing and make your own choices.'" Quinn is now involved in several Autism-related organizations and would like to do a film that shows the relationship between over-immunization, pushed by drug companies, and Autism.

The list of celebrities that have children with Autism is growing - Jenny McCarthy - son, Golfer Ernie Els - son, John Travolta and Kelly Preston - son, Sylvester Stallone - daughter, Toni Braxton - son, Dan Marino - son, Doug Flutie - son, Ed Asner – son, Gary Cole – daughter, Aidan Quinn – daughter, and Holly Robinson-Peete – son.  These are just a few of the celebrities that have come forward - all have a message and a charity that they support.

Most children display classic symptoms and behaviors that include lack of eye contact, avoidance of interaction with others, repetitive interests, delayed or unusual speech patterns, sensitivity to light, sound, or crowds, repetitive behaviors and ritualized activities. The symptoms of Autism typically last throughout a person's lifetime.  The most severely affected child might be unable to speak or care for himself as an adult but a mildly affected person might be considered “quirky” or “odd” yet lead a normal life.

Autism is a complex, highly controversial, and often misunderstood disorder – it raises many more questions than answers. One of the most difficult aspects for parents of Autistic children is the inconsistent information out there – is it caused by vaccines, allergies, genetics, or the environment? However, one thing is certain early diagnosis and intervention can make a world of difference in an Autistic child's development and future.