Where in health am I? : Home / Blogs and Commentaries / Celebrity Health / Dyslexia Can Be Overcome, Just Ask the Fonz

If you don’t know what Fonzie is, then clearly you are not cool. For nearly half of his life Henry Winkler lived with a severe case of undiagnosed dyslexia 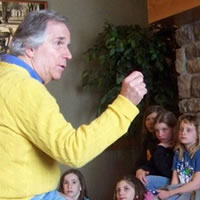 I’m a child of the 1970’s. I grew up eating Space Food Sticks, playing with my Slinky, and watching hours of awesome television every day. So, I think I’m a pretty good judge of what’s cool and what isn’t cool when it comes to 70’s pop culture. And everyone growing up in the 1970’s knows that the definition of cool is Fonzie.  Remember when all he had to do was snap his fingers and the girls came running or the lights would turn on?  No nickel for the Juke Box?  No problem!  Fonzie took care of it with a well-placed blow to the front.  And he’s the only greaser to have his leather jacket hanging in the Smithsonian.  Like I said, cool.

To this day Fonzie is quite possibly the most loved hooligan of all time.  The high-school dropout with slicked-back hair, tight jeans, motorcycle, and leather jacket was really just a tough guy with a big heart.  Fonzie was looked up to by his peers, but looked down upon by traditional society because of his questionable past.  And although he was known as the baddest  greaser around Fonzie was soft spoken, rarely relied on violence, treated others with respect and stood up for the defenseless.  Happy Days represented an idealized vision of life in Middle America during the 1950’s and 1960’s.

And because it was a TV sitcom there had to be a morally righteous ending, so Fonzie made the choice to end his life of delinquency.  He graduated from high school and spent his evenings at Arnold's Drive-In, righting wrongs and doling out advice to his pals in his men’s room “office.”  Fonzie was the perfect example of don’t judge a book by its cover.

Since Happy Days ended its 10-year run in 1984, Henry Winkler, 64, the actor who played Fonzie, has directed and starred in several TV shows, films, and plays.  He also earned a master’s degree in fine arts from Yale and is the co-author of a very popular children’s book series called “Hank Zipzer - The Misadventures of The World's Greatest Underachiever.” Pretty impressive for a guy who can’t read very well, can’t spell, and can’t figure out math.  Henry Winkler has dyslexia.

For nearly half of his life Winkler lived with a severe case of undiagnosed dyslexia.  He says, “When I was growing up, no one knew what learning challenges were.  So, I was called stupid, lazy, and told I was not living up to my potential.” His German-Jewish immigrant parents didn't understand his learning problems either; their nickname for him was the German word for “dumb dog.” He says, “I was grounded for most of my high school career. [My parents] thought if I stayed at my desk for 6 weeks at a time, I was going to get it and they were going to put an end to my laziness. And all the time inside I’m thinking, ‘I don’t think I’m stupid. I don’t want to be stupid. I’m trying as hard as I can. I really am.’”

Since Winkler’s learning issues had gone undiagnosed he never had the benefit of special education classes and struggled to make it through school.  He says, “I wanted to be an actor, but I wasn't even able to do any of the school plays because my grades were so low.  I wasn't allowed to participate in extracurricular activities.”  Despite all that he holds three degrees.

When Winkler was 31 he and his wife, Stacey, a child welfare advocate, were told to have their son Jed tested for possible learning disabilities.  Their son was exhibiting symptoms similar to Winkler’s– exceptional verbal skills along with poor reading and writing ability.  “We had Jed tested in third grade, and everything they said about him, I said, ‘Oh, my God, that’s me!’” he recalls.  Winkler finally understood what he'd been struggling with all his life.

At that time Winkler also took the written and verbal tests that are used to diagnose dyslexia and the results were life-changing. He says his first reaction was to be angry about his childhood struggles, “My father spoke 11 languages and knew how to insult me in every one of them.  All that punishment, all that yelling, all that feeling bad was for naught.”

However, instead of anger he chose to use his dyslexia as a platform to reach other silent sufferers, especially children.  Using his personal experience as a dyslexic child, parent, and supporter of various children’s groups, Winkler has developed a strong sense of what kids need to be successful.  He hopes that by talking to groups of parents and children he can help those who have dyslexia and those who do not, to understand that those who do simply learn in a different way. Like Fonzie, Winkler has become the advocate for the underdog.  Cool.

There is a lot of misinformation about Dyslexia; page after page of conflicting data that I’m sure is overwhelming to the newly diagnosed or struggling.  Many people believe it is an intellectual disability but it isn’t; it’s a neurological, language-based disability.  In fact, dyslexia has been diagnosed in people with all levels of intellect.  Albert Einstein was thought to be dyslexic and couldn’t read until the age of nine.  The majority of people with dyslexia are of average or above-average intelligence, but read at levels significantly lower than expected.

Students with dyslexia usually experience difficulties with other language skills such as spelling, writing, and pronouncing words.  Often, the dyslexic child's ability to think creatively and abstractly is quite good, but basic reading and spelling skills are very weak or non-existent.

Dyslexia affects approximately 20% of people worldwide, many of whom are undiagnosed and receive little or no intervention services.  For those individuals who have never been diagnosed, dyslexia is a hidden disability that can result in underemployment, difficulty in school, difficulty on the job, and reduced self-confidence.  Even those who have been diagnosed and receive early intervention are likely to struggle with reading and writing throughout their lives.

Left untreated, dyslexia may lead to low self-esteem, behavioral problems, anxiety, delinquency, aggression, and withdrawal or alienation from friends, parents and teachers.  The degree to which these problems develop is related to the severity of the condition. Dyslexics may also have time management and co-ordination problems.

Currently, there's no known way to correct the brain glitch that causes dyslexia. Dyslexia is treated with interventional education, and the sooner that begins the better. Children with dyslexia need individualized tutoring and a multisensory education program.  Many schools offer such programs.

As for Winkler, he is no longer bothered by his upbringing, in fact he is proud of what he’s accomplished despite everything he had working against him.  He says, “My dyslexia is what pushed me forward. I became a success, but still, reading is very difficult for me. Every book I read is a triumph. Math is still difficult. Spelling is out of the question. Certainly there are times when I wish I could spell, I wish I could do math in my head, I wish I could learn Italian.  But, I would not be where I am today if I did not struggle through my learning challenge.”

And he has message for children around the world.  “If I were to give you two words to live by they would be tenacity and gratitude. Tenacity gets you where you want to go and gratitude doesn’t allow you to be angry along the way.”  When he signs autographs for children he writes them a special message, “You have greatness within you.” And when he speak to them, he says, “It's your job to figure out what your gift is…dig down deep inside yourself, get it, and give it to the world.”

The Fonz has spoken, AYYYYYYYYYY! Dyslexia is treatable!

Photo By:  Foreign and Commonwealth Office

Stacy Matson, a health enthusiast from Southern California, regularly blogs on Celebrity Health for A Healthier World, as well as contributing to the Best of the Best.