Where in health am I? : Home / Blogs and Commentaries / Celebrity Health / Elisabeth Hasselbeck - G-Free is the Way to Be!

You, or someone you know, probably is gluten intolerant but doesn’t know it. So, how do you stop eating gluten? It is in just about everything! 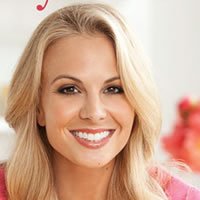 Confession time. I’m one of those annoying moms. I have always been slightly obsessive about everything my daughter ate. Sugar? No. Organic? Yes. High fructose corn syrup? Heck No! She ate tons of fresh fruit, whole grains, and low-fat versions of everything. It was all homemade as well. I prided myself on making healthy versions of foods she would see her friends eat: pizza, mac ‘n cheese, cookies, scones, muffins, etc. She never (while at home) drank soda, only seltzer water with a touch of 100% fruit juice. She was an experimental kid and would eat anything I gave her, including vegetables. I know. I’m lucky. And obsessive.

We eliminated all dairy products from the house and bought her Lactaid pills so she could still eat ice cream or pizza when she was out with her friends.  It seemed to be fine for a bit.  Then one day she told me that her stomach was still hurting even if she took a Lactaid pill or omitted dairy 100%.  We were both devastated!  So, we went back to the doctor and they said, “It could be stress.”  Here we go again!  I bought her more Tums and she learned to live with the pain.

A few years later, and still in pain, she went away to college.  There she met two girls who had celiac disease and THEY told her they thought she had celiac as well!  My daughter made an appointment with her doctor who said, “I’m sure it’s not that. It’s very rare.  It could be stress.” My daughter was convinced that she had Celiac and was determined to prove them wrong.  So she read everything she could on the subject and stopped eating foods that contain Gluten.  Immediately she felt better and 5 months later she’s a new person. Her energy level has increased, her skin looks amazing, her joints don’t hurt, she doesn’t get bloated every time she eats, she no longer has dark circles under her eyes and most important her stomach very rarely hurts.

So, I’m angry…  For 20 years we tried to do the right thing and for 20 years she suffered, needlessly.

I guess I should be happy though.  We finally know what the problem is but how do you stop eating gluten? It is in EVERYTHING!!!  There are the obvious sources – bread and pasta and the not so obvious – soy sauce, vegetable protein, malt, toothpaste, and lipstick.  Lipstick???  It is incredibly difficult and expensive to eat gluten free. I started reading everything I could and the good news is that there’s a lot of information out there:  some good but most really awful.  The book that helped us the most and became our bible was the G-Free Diet by Elisabeth Hasselbeck from The View.  I know. I really don’t like her either, but the book is great!

Hasselbeck, like my daughter, had been misdiagnosed for many years.  Her symptoms were very similar as well: cramps, fatigue, bloating, and diarrhea. But it wasn’t until Hasselbeck appeared on the TV show Survivor that she realized her problems had to do with her diet.  While most of the contestants floundered on the minimal food they were given, Hasselbeck thrived.  She went 39 days eating only rice, fruit, and whatever fish she could catch and felt “amazing.”  Her energy level increased, no more bouts of diarrhea, no more fatigue, no more bloating and no more excruciating stomach pains.

Once Hasselbeck returned to the U.S. and resumed her normal diet her symptoms came back full force.  Realizing her symptoms were food related she started reading, making phone calls and doing research.  Hasselbeck eventually diagnosed herself with celiac disease and started visiting a number of doctors.  She eventually found one that ordered a series of genetic tests and a stomach biopsy and gave her an official diagnosis of celiac disease. That was in 2002 and she is now living a very healthy happy life. Hasselbeck is a success story; she found a doctor that listened to her and she recovered from her illness.  Writing the G-Free Diet was her way of helping others get the diagnosis and help they need quickly.

So, do these symptoms sound familiar?  I’ll bet they do. You or someone you know probably have celiac disease and don’t know it.  It’s the most common undiagnosed disease in the world. Why?  Well, no research is being done to find a cure because the only cure is not eating gluten.  No research = No drugs to push on patients.  No drugs = No profit. (My opinion)

But, I think the problem is not with finding a cure but with finding the cause. (Genetically engineered foods?? Processed Foods??)  The number of people in the U.S. who have celiac disease doubles every 15 years and currently affects 1 in 133 people, 97% of which are undiagnosed.

Living with celiac requires a lifestyle change but it doesn’t have to impact your life negatively. The G-Free Diet showed my daughter and me that. I highly recommend the book. It is easy to read and provides information such as:  How to tell if you may be gluten intolerant, questions to ask your doctor, tests to request, gluten free recipes, shopping guides, where to find gluten free products, a restaurant tear-out card, tips on how to read food labels, advice for family and friends on living with someone who’s G-Free, and soooooo much more. Good nutrition should be a key ingredient in everyone's life! Good Luck!