Where in health am I? : Home / Health Cloud / Business of Health / Medical Devices / Robotics / Exoskeletons

Could exoskeletons, robotic limbs, and cybernetic augmentations reach a point where they are beautiful? Furthermore, could they ever become so prolific as to be fashionable - Kyle Munkittrick 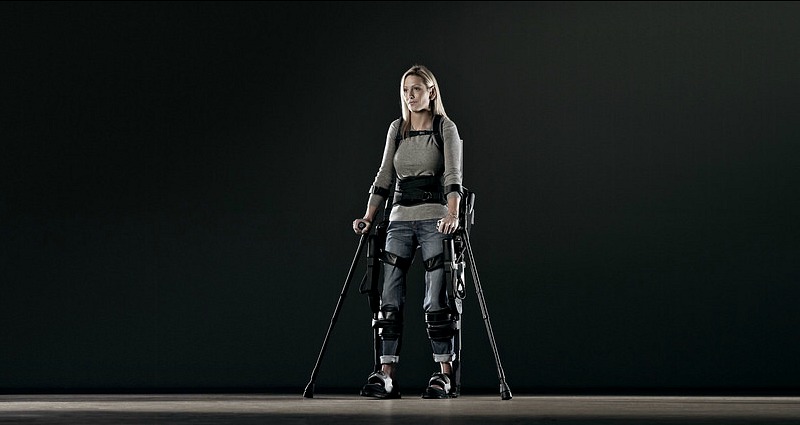 We don’t often realize it, but all fashion is predicated upon human beings’ predilection for prostheses and augmentations. All clothing, bags, and shoes are augmentation to our body, skin, and feet allowing us to deal with non-tropical climates, to carry large amounts of stuff, and to deal with harsh or unforgiving terrain. If humans hadn’t already modified ourselves, the only fashion we’d have is hairstyle.

Eyeglasses and contact lenses are one of the most prolific forms of medical augmentation on the planet. In many industrialized modern cultures, eyeglasses and contacts are also a major element of fashion. Thin, small glasses are out of fashion; big, chunky frames with large lenses are in. Tomorrow it might be different. But in every case, you have glasses because you have a medical problem that needs fixing.

But what about other medical devices? Canes and even artificial legs are occasionally not merely built to work but are designed and crafted to be fashionable. Could exoskeletons, robotic limbs, and cybernetic augmentations reach a point where they are beautiful? Furthermore, could they ever become so prolific as to be fashionable? More and more, the answer looks to be yes.

Two recent articles, one from the New York Times and one from The Atlantic, point to a future less than a decade away where you will be in the shopping for the latest in cybernetic designs the way you shop for new glasses frames now.

At The Atlantic, Alice G. Watson explains “Why the Future for Quadriplegics Looks Bright“:

The final product sounds more like the imaginings of Dr. Octavius: A fully functional exoskeleton, manipulated through connections to the patient’s motor and somatosensory cortices. “The ultimate goal,” [neurophysiologist Miguel] Nicolelis says, “is to build a robotic vest for the whole body. Just as in this study, a person’s brain activity will control movement of the limbs, and get sensory feedback from the external world.”

This kind of technology could revolutionize the way para- and quadriplegics live their lives. According to Nicolelis, if and when a brain-controlled exoskeleton becomes commonplace, spinal cord injuries will be a different animal altogether. Doctors would theoretically use this kind of technology to treat patients immediately after a spinal cord lesion, so that living in a wheelchair could be a thing of the past.

Though this all sounds a little futuristic, the end-date for this project is oddly close. “We are working with the Brazilian government, who is helping fund the project,” Nicolelis says. “At the 2014 soccer World Cup celebration we hope to have a Brazilian teenager with quadriplegia walk out and make the opening kick.”

The World Cup is in just over two years, folks. To get an idea of the importance of a quadriplegic kicking a soccer ball two years from now is, let’s look at the case of Robert Woo.

Earlier this week, Ekso Bionics debuted their new leg-brace exoskeleton, named Ekso [pictured], at New York City’s Mt. Sinai hospital. The New York Times has a great profile of Robert Woo, one of the first people to test Ekso, and his experience learning to use the device. Seriously, watch the video. It’s simultaneously amazing and depressing. He can walk!—sort of, over very short distances at a belabored pace with a lot of help. But he can walk! Watching Woo use Ekso shuffle across the floor with the assistance of two crutches, a bevy of whirring servos, and a rehabilitation therapist at the controls is hardly the image of the Six Million Dollar Man leaping 10 foot fences conjured in our minds when we hear the word “cyborg.” Of course, Ekso is in the early stages of development and testing. As with Nicolelis’ optimism about the progress he hopes his team makes in the next few years, it was the outlook of Ekso Bionics that blew me away:

“Our goal is that this eventually fits under your pants,” said Eythor Bender, the chief executive of Ekso Bionics in Berkeley, Calif. “You’ll wear it as a fashion item.”

The idea of fashionable cybernetics is preposterous until you remember one thing: a real person is going to have to wear this every day of their life. To a job interview, on a date, to walk the dog, and at the alter—if someone needs an exoskeleton, that exoskeleton is their arms and/or legs. A person using Ekso would want that part of his or her body to look as good as the rest of it. That is the fundamental shift that Ekso is expressing. Just because something is a medical device doesn’t mean it needs to be ugly or drab and utilitarian. Cyborgs should get to be beautiful too.

But again, your Skeptic’s Eyebrow raises (note: Skeptic’s Eyebrow sounds like the scientist’s version of Tennis Elbow). Not a lot of people will need an exoskeleton. So how in the world can I make the claim that exoskeletons will be as prolific and important in this century as eyeglasses were in the last century?

Eyeglasses started as a luxury item that, due to both prohibitive cost and a culture in which most labor did not require perfect vision. As eyeglasses became more readily available during the end of the 19th Century and experiencing an explosion in popularity during the first half of the 20th in conjunction with the rise of the information age. Now eyeglasses are often an essential piece of a person’s identity and personal fashion. So much so that people without eye problems will wear glasses without lenses because they feel left out of an entire segment of fashion. To put that in context: people are feigning a disability to look cool.

Why would the exoskeleton become as popular as eyeglasses? Take a moment and think everyone you know who uses a cane, or crutches, or a wheelchair, or who permanently hobbles around because of an injury or disease or simply because they are old. Our whole population is getting older and staying old longer; an increase age-related mobility issues is bound to follow. Now add in every person, including yourself, that you have known who have temporarily needed one of those devices. There is a much larger built-in user base for exoskeletal legs than you may have previously considered.

Can we expand the user base further? Absolutely. Think about your hobbies. Ekso Bionics started with hiking and backpacking-assist exoskeletons. Now think about all the jobs that would benefit from being able to walk longer distances, run faster, and carry more. The military is an obvious example, but nearly every profession that requires a hard hat or back brace could benefit as well. Now think of what you would do if, for the price of a computer, you had a sweet-looking exoskeleton that you could strap into and be able to run a marathon or hike the Adirondack Trail with ease. The market for exoskeletal enhancements could potentially be massive for soldiers, manual laborers, and weekend warriors alike.

Exoskeletons are currently at the earliest stages of becoming a medical solution for some people. Robert Woo’s experience with Ekso is another tiny step (shuffle?) in the evolution of exoskeletons. But soon enough, a previously paralyzed person will toddler walk across the room thanks to an exoskeleton. Then someone a little later will stride with cybernetic confidence. Exoskeletons will become standard gear in certain professions. And not too long after that, you might step into your own pair of stylish cyborg gams and go on a relaxing 10-mile jog...

Source: Kyle Munkittrick, Exoskeletons Will Be the Eyeglasses of the 21st Century, The Crux, November 15, 2011.

...we believe these mobile frameworks have a bright future in giving back the sense of movement for the paralyzed, in assisting doctors during long hours of surgery, or even keeping pensioners longer in blue-collar jobs requiring heavy lifting.

Are skintight suits the future of robotic exoskeletons?

In 2012, paralysed woman Claire Lomas even completed the London Marathon wearing one. But there are still significant engineering challenges to be addressed before we will see widespread use of these systems. For one thing, we need a way for people to power the suits without having to plug themselves in every half an hour.

Bionic Bodies: Why the Future for Quadriplegics Looks So Bright

The ultimate goal is to build a robotic vest for the whole body. A person's brain activity will control movement of the limbs.

Exoskeletons are Coming, Even Walking to Town

With technological advancements, we currently have what most would consider Star Trek-like machinery to help paraplegics walk. This bionic devices, skeletons on the exterior similar to arthropods (think scorpion), are attached to the person enabling him or her to take his or her first few steps in years.

Exoskeletons Could One Day Help Paralyzed People Climb And Turn

But first, scientists have to figure out how to make exoskeletons flexible.

Now Is The Time For Robotics

As a company that has been “fighting the good fight,” pioneering the practical application and commercialization of exoskeleton technology for many years now, we applaud what the Walk Again Project has undertaken. They are shooting for the moon with the conviction that at some point you just have to aim high in the name of progress toward a better tomorrow. They seek to demonstrate the feasibility of using a brain machine interface to control human exoskeletons.

A growing number of companies are developing assistive technologies to help disabled people walk—but these devices can distract from infrastructure changes that would make cities more disability-friendly.

Exoskeletons Will Be the Eyeglasses of the 21st Century

But soon enough, a previously paralyzed person will toddler walk across the room thanks to an exoskeleton. Then someone a little later will stride with cybernetic confidence. Exoskeletons will become standard gear in certain professions.

HAL® Therapy is the medical service with Robot Suit HAL® to provide medical treatments for functional improvement of patients with cerebral, nervous and muscle disorders including spinal cord injury and cerebral embolism.

Global market leader for the development, manufacturing and marketing of robotic and sensor-based devices for functional movement therapy.

60 million people in the world have lost walking ability. 17 million are children affected by a number of neurological diseases. While wheelchair bounded, they suffer from a number of physiological and psychological side effects. Their quality of life could be largely improved if walking could be repaired, restored or rehabilitated. Marsi Bionics works towards this goal.

Reha Technology is a leader in advanced medical robotic technologies for rehabilitation of upper and lower extremity neurological movement disorders.

Atalante is the hands-free robotic exoskeleton. It is self-balancing: it creates its own balance and is used without crutches.