Where in health am I? : Home / Health Cloud / Opinions / Second Opinion 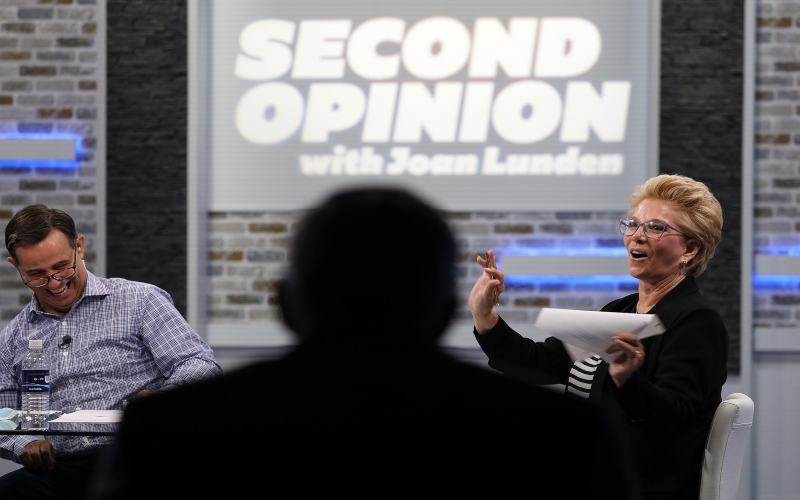 Actress Rita Wilson, who was diagnosed with breast cancer and underwent a double mastectomy, told People magazine in April that she expects to make a full recovery "because I caught this early, have excellent doctors and because I got a second opinion."

When confronted with the diagnosis of a serious illness or confusing treatment options, everyone seems to agree that it can be useful to seek out another perspective. Even if the second physician agrees with the first one, knowing that can provide clarity and peace of mind.

A second set of eyes, however, may identify information that was missed or misinterpreted the first time. A study that reviewed existing published research found that 10 to 62 percent of second opinions resulted in major changes to diagnoses or recommended treatments.

Another study that examined nearly 6,800 second opinions provided by Best Doctors, a second-opinion service available as an employee benefit at some companies, found that more than 40 percent of second opinions resulted in diagnostic or treatment changes.

"What we don't know is the outcomes," says Dr. Hardeep Singh, a patient safety researcher at the Michael E. DeBakey VA Medical Center and Baylor College of Medicine in Houston, who co-authored both those studies. "What is the real diagnosis at the end? The first one or the second one? Or maybe both are wrong."

That doesn't mean second opinions are a bad idea. By some estimates, diagnostic errors occur in 10 to 15 percent of cases.

"There's no getting away from it, diagnosis is an imprecise thing," says Dr. Mark Graber, a senior fellow at RTI International who also co-authored the studies. Graber is the founder and president of the Society to Improve Diagnosis in Medicine.

In Wilson's case, she wrote that after two breast biopsies she was relieved to learn that the pathology analysis didn't find any cancer. But on the advice of a friend, she decided to get a second opinion, and that pathologist diagnosed invasive lobular carcinoma. Wilson then got a third opinion that confirmed the second pathologist's diagnosis.

Getting a second opinion may not involve a face-to-face meeting with a new specialist, but it will certainly involve a close examination of the patient's medical record, including clinical notes, imaging, pathology and lab test results, and any procedures that have been performed. Some people choose to have that second look done by physicians in their community, but other patients look for help elsewhere.

In addition to employer-based services like Best Doctors or Grand Rounds, medical centers such as the Cleveland Clinic and Johns Hopkins in Baltimore also offer individual patients online second opinions.

Face-to-face meetings with specialists who provide a second opinion and review a patient's medical record are more likely to be covered by insurance than an online consult, but nothing is guaranteed.

"Usually it's not the second opinion where the hiccup is," says Erin Singleton, chief of mission delivery at the Patient Advocate Foundation, which helps people with appeals related to second opinions. "It may be that the MRI that they want to do again won't be approved." Many insurers won't pay for diagnostic or other tests to be redone.

Patients seeing an out-of-network specialist for a second opinion may encounter significantly higher out-of-pocket costs, particularly if they want to subsequently receive treatment from that provider. In those instances, the foundation can sometimes work with patients to make the case that no specialist in their network is equally experienced at treating their condition.

Of course, asking for a second opinion doesn't necessarily mean accepting the advice. In the Best Doctors survey, 94.7 percent of patients said they were satisfied with their experience. But only 61.2 percent said they either agreed or strongly agreed that they would follow the recommendations that they received in the second opinion.

Getting a second opinion before deciding on a treatment can be lifesaving. According to the Washington Post, in the US, 12 million people undergo diagnostic errors yearly, but a good SMO programme can assist in confirming diagnosis, identifying additional medical options, clarifying treatment plans, and exposing potential medical errors.

A guide to a second medical opinion

Most patients who seek a second opinion do so because they are unhappy with the information they’ve been given about their situation. They may also be unhappy with the way their diagnosis and treatment recommendations were communicated to them; they are seeking a clearer explanation or a doctor they feel a better rapport with.

Doctors Get Their Own Second Opinions

A new tool helps primary-care physicians draw on medical expertise from all over the world.

How to Prepare for a Second Opinion Doctor Appointment

Expert physicians and cancer patients agree that getting a second opinion is crucial, even if you are very pleased with your primary medical team. It is your health and your life; take care of yourself!

In health care, it’s time to get a second opinion on what ‘value’ stands for

“Until we have a shared vision of what we’re trying to achieve, it’s going to be hard to move forward in a meaningful way,” Pendleton says. “If everyone is pulling in a different direction, then eventually we’ll get to a point where we have a very mediocre health care system where ‘improvement’ amounts to nothing more than cutting costs. We aspire to do better than that.”

It's Worth Getting That Second Doctor Opinion, Study Finds

A vast majority of patients seeking a second opinion receive a new or refined diagnosis, according to a new study from the Mayo Clinic.

Love Your Cancer Doctor? Get a Second Opinion

Doctor 1's proposed path seemed cleaner, easier. ... I learned the value of a second opinion a year and a half ago

New Ways for Patients to Get a Second Opinion

For many patients, it has become a routine part of the medical process: Get a diagnosis or treatment plan and then seek a second opinion. A growing number of online services are offering second opinions and some are seeing increasing patient demand for a second set of eyes.

One surgeon says you need an operation. Another says you don't. Here's why that happens.

Many Americans get radically diverging opinions from surgeons on the question of whether to operate. These contradictory viewpoints can be a source of great stress and confusion, leaving patients unsure about what to do in what are often life-or-death situations. There's plenty of guidance out there for surgeons, so why is this so common?

Take Control Of Your Care When You're Seriously Sick

The value of second opinions demonstrated in study

Many patients seek a second opinion or diagnosis confirmation before treatment for a complex condition. In a new study, researchers report that as many as 88 percent of those patients go home with a new or refined diagnosis -- changing their care plan and potentially their lives. Conversely, only 12 percent receive confirmation that the original diagnosis was complete and correct.

What You Should Know Before Seeking A Second Opinion

Getting a second opinion on serious medical issues makes a lot of sense...

When Is It Time for a Second Opinion?

Don’t be afraid to ask for a second opinion. I’ve been on all sides of this issue: as the physician giving the opinion, as a physician whose patient has gone to a colleague across town for another opinion, and as a worried friend and relative seeking confirmation of a diagnosis and treatment plan.

When, And How, To Ask For A Second Medical Opinion

When faced with a major medical decision, it can be difficult for patients to determine when it's appropriate to seek a second opinion. Asking another doctor can help catch misdiagnoses or prevent unnecessary treatments, but they can also be a waste of time and resources.

Second Opinions Are Often Sought, But Their Value Isn't Clear

When confronted with the diagnosis of a serious illness or confusing treatment options, everyone seems to agree that it can be useful to seek out another perspective. Even if the second physician agrees with the first one, knowing that can provide clarity and peace of mind.

4 Myths About Getting a Second Opinion

Ever wonder what doctors whisper about when you're not in the room? Find out each week on Second Opinion.

We believe empowered members are the future of healthcare. 2nd.MD exists to champion your voice when you have to make an important medical decision.

Best Doctors provides an innovative employee health benefit that is improving the quality and cost of healthcare. When faced with important medical decisions, Best Doctors members have access to world-class medical expertise, so they can be absolutely sure they have the right diagnosis and the right treatment.

Think of us as your Medical Ally — a team of experts that can help you understand your diagnosis and all treatment options, find the right doctor or hospital for your needs, get a second opinion if you need one and even cope with having a medical condition.

Have one of the top specialists in the country review your radiology scan. Our expert radiologists are standing by to give you a clear, concise online radiology second opinion for your MRI, CT, PET, X-ray, Ultrasound, or Mammogram read.

Are you concerned about the healthcare you or someone you know is receiving or received in the past? If your care was not appropriate and it caused injury, our team of physicians can provide a free review.

Second opinion radiology. You have good reasons to be here. One in every five patients Receives a "distinctly different" diagnosis.

When you are faced with decisions regarding a new diagnosis or treatment plan, having another expert opinion is the first step towards getting the care you need.

Its flagship service is the Second Opinion Service. If diagnosed with a critical condition or if you have any medical problem or query, before you decide on the way forward as regards treatment and after you’ve been given a complete first diagnosis by a suitably qualified consultant, apply for an additional review of the case with top specialists from major US hospitals to obtain a reliable, professional and independent second medical opinion.

About Us SecondOpinions.com is a Medical Consultation and Second Opinion leader providing second opinion consultation service in all areas of medicine, including radiology. Utilizing the power of the internet, we are connecting patients around the globe with some of the world's best doctors.

If you or your loved one has been diagnosed with a serious disease and provided various preoperative and postoperative treatment options, Second Opinion Expert can assist you in navigating through the confusing and expensive medical treatment process.

If you are facing a complex medical issue, the Stanford Medicine Online Second Opinion Program provides access to expertise that can inform your most important care decisions.