Where in health am I? : Home / Health Cloud / Public Health / Healthcare Systems / NHS 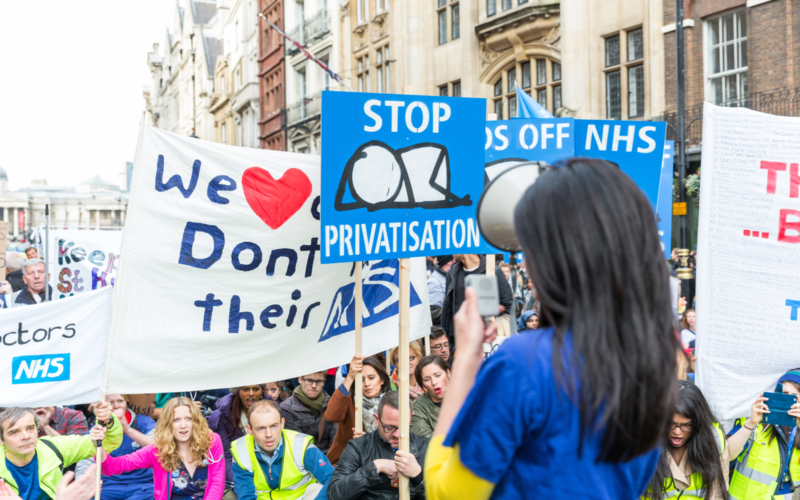 Let’s begin with what is actually happening at NHS England, where the primary problem this winter has been that demand for care — compounded by a severe flu season — is surging past the system’s ability to supply care. Despite the shocked reporting about this in both the U.K. and the U.S., the crisis was widely predicted months ago, and was potentially preventable.

In the U.K., the Conservative-led government is continuing an austerity regimen for NHS England. Its funding is projected to increase a meager 1 percent per year from 2010 to 2020, compared with an historic average of 3.8 percent per year since the NHS was founded in 1948. This transpired against a background of relative parsimony in overall health spending in the U.K. Britain allocates 9.9 percent of its gross domestic product to health care — about average for industrialized countries — compared to more than 18 percent in the U.S.

Adding to the pressure on NHS England was a simultaneous 7 percent real reduction over the last decade in spending on social services, such as care at home or in residential or nursing homes. This cut has increased the demand for health services, especially among frail elders with no place else to turn. To make matters worse, worries about Brexit are sparking an exodus of essential European Union doctors and nurses who were staffing an already under-resourced NHS England.

The unique structure of this system also leaves it more vulnerable to political whims. Unlike most other industrialized countries that provide universal health coverage, the U.K. government owns a large proportion of the hospitals and employs many of the health professionals who provide daily care to its citizens. This control can easily turn into continuous meddling in the health system’s organization and financing. Every change in government — and even a new Secretary of State for Health — seems to unleash another major reorganization that risks distracting and confusing health care providers.

Despite these significant stressors, the U.K. has built a much stronger primary care sector than the U.S., and its health care system is typically ranked one of the best among wealthy nations. In addition, the NHS remains extremely popular. Satisfaction with the system hovers around 60 percent, with low levels of dissatisfaction. And even though 92 percent of residents of England, Scotland, and Wales believe that the system is facing a funding problem, survey data show no appetite for major changes in the structure of the NHS. This suggests that, from the public’s point of view, the system is still doing its job.

So, what does all of this say about the how the U.S. health system should expand health insurance, if it chooses to do so? In answering that question, it is essential to keep in mind that every country’s health care system is a unique reflection of its history, politics, and culture. Wholesale importing of one nation’s approach to another is both unlikely and unwise. But that doesn’t mean the U.S. can’t learn from other nations’ successes and failures.

First, regardless of how a nation’s health care system works, it must be appropriately funded. Health systems need sufficient resources to meet the predictable needs of their patients, especially when facing an epidemic.

Second, underfunding social services risks inflicting pain and suffering on sick and needy citizens and can be self-defeating when it causes health care costs to rise. The U.S. currently invests little in social services compared to what it spends on health care. It should reevaluate this imbalance and its effects.

Third, providing universal coverage does not require government ownership and control of the health care delivery system. As the NHS England example suggests, that approach presents enormous political and technical challenges. Given the strong affinity in the U.S. for non-governmental solutions, building on its largely private delivery system is the direction it will almost certainly take.

Whether you favor or oppose expanding health insurance coverage in the U.S., don’t conclude from the U.K. experience that universal coverage can’t work. Health insurance coverage is essential to the health and well-being of millions of Americans, and to the success of its health care system. There are many ways to structure a system that provides Americans with the coverage they need and deserve.

The U.S. can learn from the National Health Service — and other health systems — about paths forward and paths to avoid as it designs a uniquely American approach to its immense health care problems.

Source: David Blumenthal MD, Excerpt from What the U.S can learn from the U.K.’s National Health Service, Stat, February 16, 2018.

There are longstanding concerns that an under-supply of staff is compromising care with little idea about how to rectify matters. In the past, the NHS has filled vacancies by recruiting staff from abroad. In 2014, 28% of doctors working in the UK were trained abroad, compared with an average of just 9% across EU countries. About 13% of nurses were foreign trained, compared with 2% elsewhere.

How the British health care crisis translates to America

Seven years of austerity and rising demand for services is taking a mounting toll on patient care. Waiting times are rising, access to some services is being restricted and access to family doctors, mental health and community services are under huge pressure.

The U.K. Created A Health Care System To End Class Privilege. America Must Do The Same

What we need now is not the money but the political will to hold fast to an uncompromising demand: the demand for a single public program with comprehensive coverage for all U.S. residents that is free at the point of service, as well as a jobs training and placement assistance program for those currently employed by the private insurance industry. Finally, we should avoid the language of moralism and charity. Medicare for All will greatly improve the lives of the vast majority of the population, but it will not be won simply because it is the right thing to do. It will be won because a strong working-class movement empowers clear-thinking people like Aneurin Bevan to fight the ruling elites.

Is the NHS the world's best healthcare system?

Reasons to celebrate the institution that has changed beyond all recognition since 1948. Nothing inspires national pride quite like the National Health Service. More than two-thirds of respondents in a recent poll said they considered the establishment of the institution, which turns 70 this week, to be Britain’s greatest achievement.

NHS70: How Has Technology Changed Our Healthcare?

The NHS has come a long way since those early days after the Second World War. From discovering DNA to performing life-changing surgeries, technology has played a central role in the service's evolution.

NHS leaders realized early on that they were collecting a gold mine of data that could change the course of treatment for cancers and other life-threatening diseases, says Nina Monckton, chief insight officer of the NHS Business Services Authority, which provides business support services to tens of thousands of UK healthcare providers under contract to the NHS.

The NHS isn’t bad at everything. It does provide universal coverage, though not particularly quick, modern, effective, or efficient coverage, and it is better at treating some not very common diseases than many other systems. And it enjoys broad public support. Despite improvements since the 2000s, the NHS is still lagging behind the health systems of most comparable countries on most health outcome measures for which robust data is available.”

God Bless America — But Give Me The British NHS Any Day

Perhaps the most chilling failure in America — still, even after Obamacare — is the healthcare system. So to be back in the UK for a few days and to hear people yet again talking about destroying or diminishing the National Health Service is simply agonizing. Just as I’ve advised Americans in the past to look elsewhere to learn lessons in success, I would urge the British to look to America to learn lessons in failure.

The free health care system, funded through taxpayer money, is a jewel in Britain’s crown. In fact, it makes British people more proud (pdf) than both the signing of the Magna Carta and the country’s defiance of Adolf Hitler during World War II.

“With the N.H.S. coming under pressure as never before, we are asking patients and the public to use the health service responsibly,” she said, “to help ensure that care is readily available for everyone who needs it.”

Security upgrades for the National Health Service’s information technology systems have lagged behind for years.

Britain’s health care system has been broken for quite some time, but it’s not beyond repair. Like many other nations, Britons see America’s health care system as the antithesis of good care. In comparison to the cost and complication of the US system, the UK’s national health service looks dreamy: No matter who you are, where you’re from, or what your profession, you simply get the care you need—for free.

The NHS is under threat. Only a new model of care will save it

The government’s refusal to embrace prevention rather than treatment as the way forward is putting Britain’s greatest post-war achievement in jeopardy.

The NHS principle of free medical treatment, funded by taxation, retains wide support. But it has been challenged by rising life expectancy, increasing patient expectations and the vagaries of government funding.

What It’s Like to Be a Patient With the N.H.S.

Britain’s National Health Service turns 70 this year, amid warnings of an existential crisis. At the end of last year, we interviewed several staff members to ask them what they hoped and feared for the system’s future. Now, readers tell us about their and their families’ experiences with the N.H.S. Here are their stories, edited for length and clarity.

What the U.S can learn from the U.K.’s National Health Service

At first glance, the struggles of NHS England appear to embody conservative arguments against the kind of single-payer health care system that many progressives in the U.S. have rallied behind as a way to expand health insurance to all Americans. In this view, the troubles of NHS England clinch the case that universal health insurance is a fool’s errand. Not so fast.

The Left has a penchant for constantly citing Britain's National Health Service (NHS) to support their clamors for socialized medicine. However, the NHS is failing; a new report states that the NHS has reached its "breaking point":