From ancient times, people have welcomed the new year with rituals to attract good fortune - BeliefNet 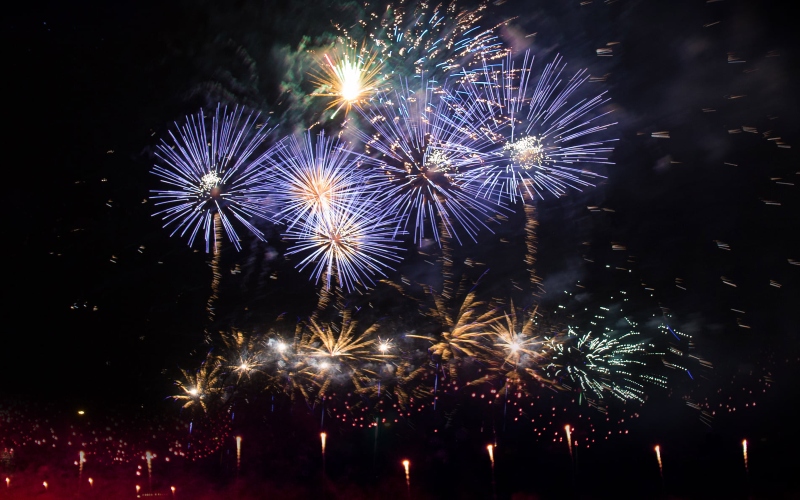 New Year's Eve, with its emphasis on romance and indulgence, might seem like a totally secular celebration. But underneath all that glitter and sparkle is an ancient holiday with deep spiritual roots. For centuries, and in similar ways, people have been observing the end of one year and the beginning of another.

Ancient Romans celebrated with six days of carousing that would probably be familiar to us today. St. Boniface, a missionary from England who visited Rome in 742, was appalled at how the Romans celebrated Kalends of January, as the New Year was called, with "dancing in the streets, heathenish cries, sacrilegious songs, tables laden with food and women wearing amulets and offering them for sale."

A Time of Rebirth

Because the Winter Solstice is the turning point of the year, beginning the lengthening of days, it has long been viewed as the birth of the year--by pagans celebrating the return of the Sun, and by Christians welcoming the birth of the Son of God. The days between Solstice and the New Year are a magical, luminous time period, when anything is possible. In England, the Twelve Days of Christmas were considered omen days which could be used to predict the weather in the coming year. In Scotland, no court had power during these days; and in Ireland, tradition held that if a person died during the Twelve Days, he or she went straight to Heaven.

In ancient Babylon, the days between the Winter Solstice and the New Year were seen as the time of a struggle between Chaos and Order, with Chaos trying to take over the world. Other cultures (Hindu, Chinese, Celtic) also viewed this as a time for reversing order and rules-celebrants would change roles with servants or dress in costumes for a time until order was restored.

While each culture's New Year celebration has its own flavor, there are certain common themes. The period leading up to New Year's Day is a time for setting things straight: a thorough housecleaning, paying off debts, returning borrowed objects, reflecting on one's shortcomings, mending quarrels, giving alms. In many cultures, people jump into the sea or a local body of water-literally washing the slate clean.

In some towns in Italy, I've been told, you have to watch out for falling objects, as people shove their old sofas, chairs and even refrigerators out of their windows on New Year's Eve. In Ecuador, people make dummies, stuffed with straw, to represent the events of the past year. These "ano viejo" effigies are burned at midnight, thus symbolically getting rid of the past.

Whatever preparations are made, most traditions teach that they should be completed before midnight on New Year's Eve. According to British folklore, you should not sweep on New Year's Day, or you will sweep your good luck away, or take anything out of the house-even trash. You only want to bring new things in to insure abundance in the coming year. If you must carry something out, be sure to bring something else in first, preferably a coin concealed outside the previous night. As this medieval poem reminds us:

Take out, then take in
Bad luck will begin
Take in, then take out
Good luck comes about

Rituals (and Underwear) for Good Fortune

Everything you do on New Year's Eve and New Year's Day is freighted with significance for the future. The American custom of spending the night with the one you love and kissing them at midnight insures that the relationship will flourish during the coming year. In Rio de Janeiro, more than a million people gather on the beaches on December 31st to honor Yemanja, the Yoruban "Mother of the Sea," who brings good fortune.

Even the color of underwear Brazilians wear on the first day of the new year has meaning. Pink brings love, yellow, prosperity; and white, peace and happiness.

The pig is the symbol of good luck in Vienna, Austria. Pigs are let loose in restaurants and everyone tries to touch them for luck as they run by. In private homes, a marzipan pig, with a gold piece in its mouth, is suspended from a ribbon and touched instead. In Greece, it's customary to throw a pomegranate wrapped in silver foil on the threshold, to spread the seeds of good luck for an abundant year.

In Spanish-speaking countries, people put twelve grapes into their wine or champagne class at midnight. The grapes represent the months of the old year and the new one. At the stroke of midnight, after toasting each other with the wine, people eat the grapes as quickly as possible, making a wish on each one.

As everything has significance on New Year's Day, the first person to cross your threshold after midnight brings luck to the household in the British Isles. In Scotland, the best possible "first-footer" was a tall, handsome, dark-haired man, who brought gifts of whisky, bread, a piece of coal or firewood, and a silver coin. He entered in silence, and no one spoke to him until he put the coal on the fire, poured a glass of whisky for the head of the house and wished everyone a Happy New Year. In France, the children knock on their parents' bedroom door, pretending to personify health, abundance and joy, which the parents welcome.

Food eaten on New Year's Day is said to affect the quality of the coming year. The ancient Romans exchanged bay and palm branches hung with sweets, dates, figs and gilded fruits. The items hung on the branch expressed hopes the new year would be sweet, fertile, and prosperous.

Neapolitans still wrap dried figs in laurel leaves and exchange them as a kind of insurance of abundance for the coming year. They also make confections of caramelized dough and tiny almond pieces, so the year will be sweet.

The Piedmontese eat little grains of rice which represent money. The traditional Umbrian New Year's cake, made of almonds, sugar, and egg whites, is shaped like a coiled snake, probably to represent the way snakes shed their skin to renew themselves, just as people leave behind the old year and embrace the new. Italians also serve lentils, raisins, and oranges, symbols of riches, good luck, and the promise of love.

In the American South, it's traditional to eat cornbread, cabbage, and black-eyed peas on New Year's Day. The peas symbolize coins or copper money, the cornbread gold, and the cabbage green or folding money.

A Japanese New Year's custom is the money tree: pine and cypress branches placed in a vase, and decorated with old coins and paper pomegranates and flowers. Old coins (with holes in them) are strung on colored threads in the shape of dragon and put at the foot of children's beds. This is called "cash to pass the year." It is supposed to be saved and not spent. However, money is given as a gift, usually in red envelopes.

Although many of these customs may seem like superstitions, they all stem from a similar belief: by ending the old year with respect and beginning the new one in the way we would like it to begin, we establish our intentions for the new year. Whether we gather together to watch the ball drop in Times Square or set off firecrackers at midnight or clink champagne glasses with our loved ones, we are acknowledging an important transition and welcoming a fresh start. May your New Year be rich with all of the blessings you desire.

Why does the New Year begin on January 1?

Our celebration of New Year’s Day on January 1 is a human-made creation, not precisely fixed by any natural or seasonal marker. It’s a civil event, not one defined by nature. Yet, for us in the Northern Hemisphere – where daylight has ebbed to almost its lowest point and the days are starting to get longer again – there’s a feeling of rebirth in the air. That’s probably why New Year’s resolutions are so popular.

If you listen to the lyrics of U2's "New Year's Day," you'll hear it was one of their earliest political messages.

Why Do We Celebrate New Year's Day? A Fascinating Look Into New Year's History

But while millions of people celebrate this holiday every year, there's probably a lot about the New Year's history that you may not know — including where the holiday first originated and how it came about.

Why Do We Celebrate New Year's on Jan. 1?

Nowadays, Jan. 1 is almost universally recognized as the beginning of the new year, though there are a few holdouts: Afghanistan, Ethiopian, Iran, Nepal and Saudi Arabia rely on their own calendrical conventions.

Our celebration of what's ahead is rooted in our most ancient instincts.

The Meaning of New Year's Traditions

From ancient times, people have welcomed the new year with rituals to attract good fortune.

7 Ways To Improve Your Luck In The New Year

Throughout history, most cultures have drawn an association between a person’s actions on New Year’s Day and their fate during the year. Here are a few New Year’s superstitions, taboos, folklore, and old wives tales—including the many food superstitions—still in general circulation.