It won't hurt you. It's just to kill plants. It's called Agent Orange...and it won't bother humans - Karl Marlantes, Matterhorn 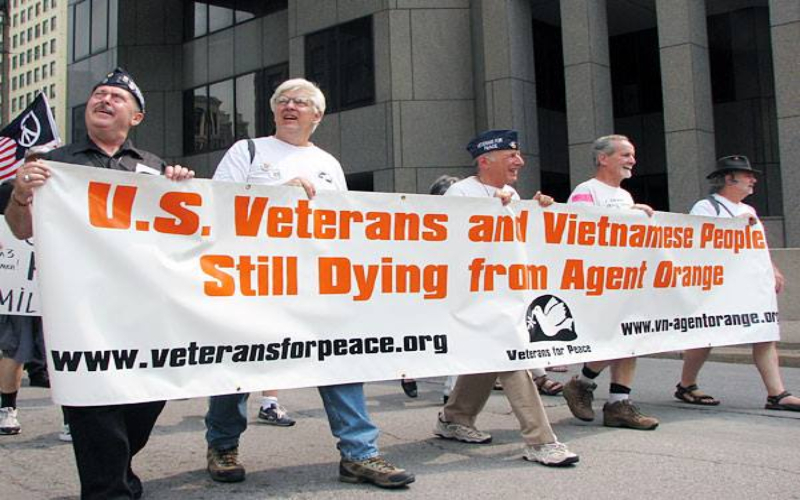 One of the areas in which the U.S. government needs to provide additional transparency and be held accountable is its use of Agent Orange.

Agent Orange is a chemical defoliant that the U.S. government sprayed over the people and lands of Vietnam to destroy crops and rid the land of foliage. It contains elevated levels of dioxin, the most toxic chemical known to science. Through their exposure to the dioxin, Vietnamese citizens, American veterans, and Vietnamese Americans (many of whom fought as U.S. allies) suffer from a variety of cancers, diabetes, heart disease, Parkinson’s disease, and birth defects. Those directly exposed to Agent Orange now have children and grandchildren suffering from life-threatening birth defects.

The Vietnamese ecosystem has also been damaged by the dumping of Agent Orange in a number of “hot spots” in central and south Vietnam, where it remains in the land and water, poisoning people, the fish, and the wildlife.

After strong grassroots pressure from veterans, the government now grants disability for service-connected illness to veterans who served in Vietnam and have one of 15 diseases.

However, the Vietnamese people have yet to receive adequate compensation. Congress has finally appropriated some funding to clean up one toxic “hot spot” and assist the victims in Danang. This is an encouraging gesture. Little of the money for those affected has reached the victims, however. And the scale of human tragedy and environmental assault requires a much greater commitment of resources.

Children and grandchildren of American veterans similarly receive no health care or assistance from the government for birth defects or medical conditions related to their parents’ or grandparents’ military service in Vietnam. Neither do Vietnamese Americans who were affected by Agent Orange or their children.

Dow, Monsanto, and the other chemical manufacturers who deliberately manufactured a “dirty” Agent Orange with higher levels of dioxin in order to maximize their profits have denied any responsibility after a paltry settlement to U.S. veterans from a lawsuit brought in the 1980s.

In May 2009 a body composed of distinguished jurists from around the world met in Paris to hear evidence of the impact of the use of Agent Orange. The tribunal received testimony from 27 individuals, including victims and expert witnesses. The tribunal found that the U.S. government and the chemical manufacturers were aware of the fact that dioxin was present in one of the component parts of Agent Orange, yet they continued to use it and in fact suppressed a study that showed in 1965 that dioxin caused many birth defects in experimental animals. The tribunal concluded that the U.S. government and the companies must fully compensate the victims and their families.

For millions of Vietnamese and hundreds of thousands of American veterans, the war lives on through the scars that Agent Orange has left on their bodies and the bodies of their children. Pham The Minh, a 33-year-old English teacher, is one example. As one of the many second-generation victims, Minh’s body bears the horrific legacy of Dow’s Agent Orange. In 2010 Minh joined other victims of Agent Orange in a delegation to the U.S. to raise awareness about their plight and push for legislation that would address the needs of both Vietnamese and American victims of Agent Orange.

Rep. Barbara Lee (D-California) is due to introduce the Victims of Agent Orange Relief Act of 2015 shortly. This bill would provide cleanup of the contaminated “hot spots” in Vietnam and medical, rehabilitative, and human services to several generations of Vietnamese and Americans suffering with diseases and disabilities. It needs to be supported by a bipartisan coalition of legislators and passed as a long-overdue measure of redress.

It is time for the U.S. government to take responsibility for the human and environmental disaster that is still being caused by Agent Orange and provide comprehensive assistance to all those suffering from this deadly poison.

Navy veterans long denied VA benefits are declaring victory after a decision by the U.S. Court of Appeals for the Federal Circuit. The court sided with the plaintiff, a Vietnam vet with cancer who sued the Department of Veterans Affairs, demanding it recognize that his health conditions were caused by Agent Orange. It took the government decades to acknowledge that the defoliant Agent Orange - widely used during the Vietnam War - was causing cancer and other ailments in veterans.

Despite little coverage of the herbicide for decades, its deadly effects have impacted the children, grandchildren and great-grandchildren of those who interacted with the chemical.

Using a variety of defoliants, the U.S. military also intentionally targeted cultivated land, destroying crops and disrupting rice production and distribution by the largely communist National Liberation Front, a party devoted to reunification of North and South Vietnam. Some 45 million liters of the poisoned spray was Agent Orange, which contains the toxic compound dioxin. It has unleashed in Vietnam a slow-onset disaster whose devastating economic, health and ecological impacts that are still being felt today.

Who knows what will be discovered someday about the health of Americans who served multiple tours in Afghanistan and Iraq. But first, there is older business to tend to. The ‘60s, it seems, aren’t over yet.

The Ironbound neighborhood of Newark, N.J., has been revitalized. The tree-lined river that runs beside it has not. Half a century ago, the herbicide Agent Orange was manufactured along the banks of the Passaic River. Poison hosed off factory floors drained into the waterway, where it sank to the bottom and became toxic sludge. The estimated cost of cleaning it up and compensating for environmental damage could run as high as $11.8 billion.

A friend recently commented that her brother, who served several years in the military in Afghanistan, seemed to always have a cough and nasal congestion when they spoke on the phone. “Oh, they’re always burning something here,” was his explanation. What he didn’t realize was that a serious environmental hazard may have been smouldering as well.

Research finds that the poison lingered on miltary aircraft into the 1980s.

Though Agent Orange was not developed for medical purposes, the public often lists it as another example of deadly scientific misinformation, particularly by pointing out the similarities between the victims of the toxicity of Agent Orange and the perceived victims of unsafe vaccinations.

The Forgotten Victims of Agent Orange

The United States has acknowledged the horrifying effects of Agent Orange on its military veterans. Why won't it do the same for Vietnamese...

Washington has admitted to the long-lasting effects of dioxin use in Vietnam, but has largely sidestepped the issue in neighboring Cambodia and Laos.

The Continuing Curse of Agent Orange

One of the areas in which the U.S. government needs to provide additional transparency and be held accountable is its use of Agent Orange.

40 Years On, the Vietnam War Continues for Victims of Agent Orange

Agent Orange was a chemical, herbicidal weapon sprayed over 12 percent of Vietnam by the U.S. military from 1961 to 1971. The dioxin present in Agent Orange is one of the most toxic chemicals known to humanity.

Agent Orange was a powerful herbicide used by U.S. military forces during the Vietnam War to eliminate forest cover and crops for North Vietnamese and Viet Cong troops. The U.S. program, codenamed Operation Ranch Hand, sprayed more than 20 million gallons of various herbicides over Vietnam, Cambodia and Laos from 1961 to 1971. Agent Orange, which contained the deadly chemical dioxin, was the most commonly used herbicide. It was later proven to cause serious health issues.