Where in health am I? : Home / Health Cloud / StaynHealthy / Animal & Pet Health / Bees 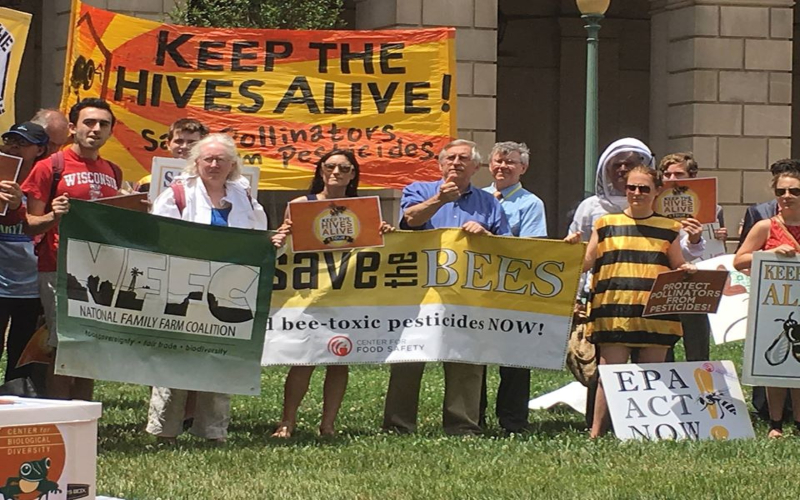 image by: Center for Food Safety

Bees are weird. A honey bee hive is an entire insect society dedicated to stealing plant sperm (some of you call that pollen).

Adult bees take pollen back to their hive where they store and ferment it into "bee bread." They chew up the pollen, mix it with a bit of honey and gland secretions, and then stuff it into a honeycomb cell. Then, in a few weeks, the adult bees chew up the bee bread again, and regurgitate it to their babies as food.

That is just one tiny bit of the complex honey bee life cycle. I mean, I haven't even mentioned the exploding penises, ritualized dancing, and secretion of home construction materials by their abdomens. Bees are f___ complicated.

It's understandable that media coverage of honey bees simplifies that complexity. Our human lives are complicated, too. We like short, punchy news stories with clear linear cause and effect relationships. When our busy brains and complex bee biology collide, misunderstandings are bound to happen. Most people think the beepocalypse is about pesticides. You know what the #1 killer of honey bees is globally? Varroa Mites, a blood-sucking bee parasite.

Varroa mites are big compared to a bee. For humans, it's comparable to a tiny vampire chihuahua stuck to your body.

Do pesticides kill bees? Of course. But that's not the same question, though, as “How do pesticides interact with all the other things that harm bees?” Teasing out the cause of bee decline is difficult.

It’s not that there are no smoking guns; there are hundreds of smoking guns, all of which contribute to the decline of bees. The consensus among bee scientists is that honey bee declines are the result of multiple factors, working independently or synergistically. Here's a short list of things we know to cause bee colony declines and death:

The biggest threats to honey bees are a combination of many factors – focusing on one exclusively won't help. I wish that the issue really was just the neonicotinoid class of pesticides, because that would give us an easy “off” switch for the problem. Ban the pesticides, bees come back. Solved.

But even if we did ban some pesticides – and deal with the giant economic upheaval in agriculture that would accompany that – honey bees aren’t going to recover, because they still are besieged by mites, viruses, and fungal diseases. That doesn’t begin to cover the issues with bee nutrition and forage diversity. Like I said, complicated.

New research out this week looked at the relationship of pesticides in pollen to honey bee colony health. A critique of past research was that it used extremely high amounts of pesticides–more than a bee would normally encounter in her life. The new research looked at smaller quantities of pesticides: The researchers deliberately fed honey bee colonies the neonicotinoid pesticide imidacloprid in a dose-response experiment. They chose their dosages based on real-world measurements of pesticide levels; 5 and 20 µg/kg doses are in the reported high range of residues present in pollen and nectar in seed-treated crops.

They also included a 100 µg/kg dose as a worst-case exposure level, representing imacloprid applied to flowering crops. (That situation is what caused a large kill of bumble bees in 2013.)

The performance of the colonies, measured by the amount of brood (baby bees), capped honey cells, and capped bee bread cells, was not significantly different from the control (untreated) hives, even at the highest dose of pesticide they fed. They found no evidence that imidacloprid affected foraging activity during and after exposure in their experiments.

Over the course of the experiment, pesticide residues declined, eventually becoming non-detectable within colonies' beebread and honey. That's one of the things that makes imidaclprid such a popular pesticide; it is designed to break down quickly.

One year there were more "queen events," or creation of special queen cells, in the treated colonies, but that didn't happen the next year. And one year colony overwintering survival did seem to be linked to high doses of the pesticide, but wasn't linked the next year. That's consistent with mixed results of many other experiments with these pesticides.

Dennis vanEngelsdorp, a leading bee researcher not involved in the study, said in an interview "It's not surprising that higher levels will hurt insects. They're insecticides after all. But this study is saying that neonicotinoids probably aren't the sole culprit at lower, real-world doses."

In general, pesticides don't kill bees, but they do make all the other bee problems worse. Just like a Facebook relationship status: It's complex.

What Would Happen if All the Bees Went Extinct?

It's almost impossible to overstate the importance of pollinators in our ecosystem.

What the Honeybees Showed Me

The colony entered my dreams, my thoughts, my conversations. Something about me had changed.

You’re a Bee. This Is What It Feels Like

Set your meetings, phone calls and emails aside, at least for the next several minutes. That’s because today you’re a bee.

A Bee Mogul Confronts the Crisis in His Field

Beekeeping on an industrial scale is central to American agriculture, and “colony collapse” has proved to be a severe test.

A Bumblebee Gets New Protection on Obama’s Way Out

The rusty-patched bumblebee, once common across the continental United States, has been designated an endangered species by the Fish and Wildlife Service: the country’s first bumblebee, and the first bee from the lower 48 states, to be added to the register. Seven bees were previously listed as endangered, but they are found only in Hawaii.

A Vaccine to Shield Threatened Honeybees from Disease

Researchers have learned how bees kick-start immune systems in offspring, and think it could lead to a protective drug

An Ingenious Invention That Turns Beehives Into Flowing Honey Taps

Harvesting honey has been a sticky, messy job that's changed very little from the earliest days of beekeeping. But it's about to get a whole lot cleaner with the Flow Hive, an ingenious re-engineering of one of nature's most perfect creations that makes getting that golden nectar as easy as turning on a tap.

Mounting toll on pollinating insects imperils over $20 billion a year in harvests.

Bees and Neonicotinoids - Another Study Promoting a Media Meme

Nature is complex, why is it so hard to say, we don’t know and we're going to study it some more? Because science won't get you on the cover of Mother Jones, that's why.

Can A Mushroom Save Honey Bees?

It's no secret that the domesticated European honey bee, Apis mellifera, is in big trouble. The not-for-profit Bee Informed Partnership estimates that 28.1% of the colonies managed in the United States were lost during the winter of 2015-2016.

An international research team, leading the Global Initiative for Honeybee Health, is addressing the global decline of honeybee populations by equipping the insects with tiny high-tech backpacks.

For the respect inherent in their work, the dedication to preserving and rebuilding resilient local communities, and their open willingness to teach others and spread their craft, these beekeepers are truly the bee’s knees.

With honey bees pollinating one-third of our food supply, these insects play a critical role in moving our food system forward.

Return of the Natives: How Wild Bees Will Save Our Agricultural System

As colony collapse disorder and other maladies continue to devastate honeybee populations, researchers are turning their attention to alternative pollinators—the thousands of native bee species throughout the country—and are looking for ways to make croplands more attractive to these wild bees.

The World’s Most Popular Insecticides Are Messing With Bees

They’re turning them into incompetent pollinators, which is bad news for plants—and humans.

Why dying bees may cause a public health problem

A new study published in The Lancet examines what might happen to humans’ health if there are not enough bees, birds, insects and other animals to pollinate the food that humans rely on for important vitamins and nutrients.

Why Protecting Pollinators Is Top Of Mind

It’s hard to imagine a world without honey bees. After all, vast swaths of our agricultural system rely on this amazing pollinator. Food as we know it depends on bees.

You're Worrying About The Wrong Bees

“Save the Bees!” is a common refrain these days, and it’s great to see people interested in the little animals critical for our food supply around the globe. But I have one quibble: you’re talking about the wrong bees.

Pesticides and Bees: It's Complex

Bees are weird. A honey bee hive is an entire insect society dedicated to stealing plant sperm (some of you call that pollen).

The Global Initiative for Honey bee Health (GIHH) is an international collaboration of researchers, beekeepers, farmers, industry and technology companies set up to research the threats to bee health in order to better understand bee colony collapse and find solutions that will help secure crop pollination.

Our mission is to collaboratively implement solutions that will help to achieve a healthy population of honey bees while also supporting healthy populations of native and managed pollinators in the context of productive agricultural systems and thriving ecosystems.

NAPPC's mission is to encourage the health of resident and migratory pollinating animals in North America. NAPPC partners gather from throughout the North American continent and beyond...

The Pollinator Partnership’s mission is to promote the health of pollinators, critical to food and ecosystems, through conservation, education, and research