In fact, we have been practicing VNS for millennia - Paul Spector MD 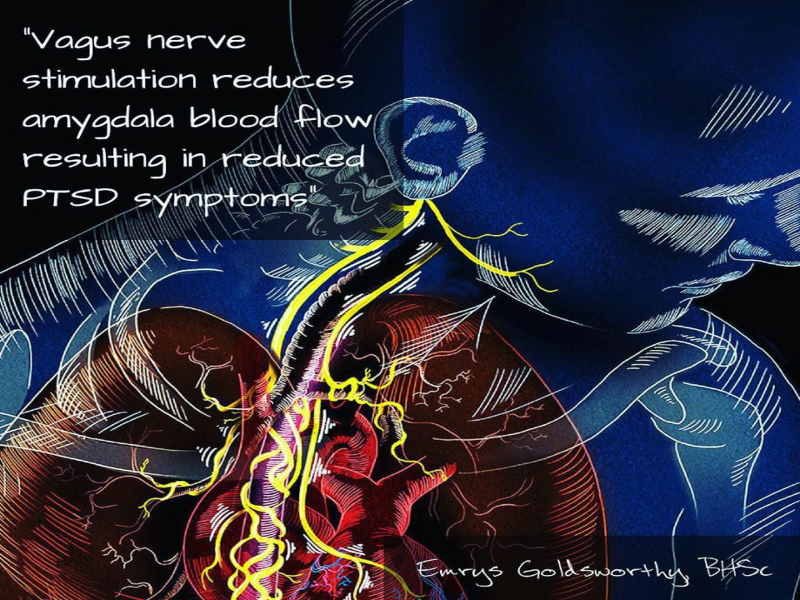 A Lot Of Nerve: The Antidote To Modern Life — Vagus Nerve Stimulation

Most people have never heard of the Vagus Nerve. That won’t be true for long. Vagus nerve stimulation (VNS) has already been approved for refractory epilepsy and depression. But the therapeutic reach of this cranial nerve covers a roster of stress-related maladies such as hypertension, insomnia, anxiety, obesity, and the destructive domain of inflammation.

The aptly named vagus, latin for wandering, extends from brain to colon and modulates autonomic, cardiac, respiratory, gastrointestinal, immune and endocrine function. Like an unconscious brain, it integrates feelings from the body and regulates essential functions including heart rate, blood pressure and respiration. Even…

Are Implanted Medical Devices Creating A 'Danger Within Us'?

A review of clinical studies by the Cochrane collaborative found the vagus nerve stimulator effective in reducing seizures for people whose epilepsy does not respond well to drugs or for whom surgery is not a good option. The Cochrane review also found that more studies needed on the effectiveness and side effects of VNS therapy. Lenzer says there's reason to believe the VNS device can cause deadly cardiac symptoms, and that it's been approved with virtually no research on how many patients implanted with VNS die.

While stimulating the vagus nerve with electricity is clearly beneficial, it’s still quite a crude approach. Stimulating the nerve is like shouting an instruction rather than joining a conversation.

One nerve connects your vital organs, sensing and shaping your health. If we learn to control it, the future of medicine will be electric.

Over three decades ago, it was found that intermittent electrical stimulation from the vagus nerve produces inhibition of neural processes, which can alter brain activity and terminate seizures. This paved way for the concept of vagal nerve stimulator (VNS). We describe the evolution of the VNS and its use in different fields of medicine.

The emerging field of bioelectronic integrative medicine targets a variety of disorders traditionally treated with pharmaceuticals by using advanced neuromodulation devices. Stimulating the vagus nerve offers significant advantages to the use of drugs—such as lower cost and fewer side effects.

Viva vagus: Wandering nerve could lead to range of therapies

Can the Nervous System Be Hacked?

Tracey’s efforts have helped establish what is now the growing field of bioelectronics. He has grand hopes for it. “I think this is the industry that will replace the drug industry,” he told me. Today researchers are creating implants that can communicate directly with the nervous system in order to try to fight everything from cancer to the common cold.

The Vagus Nerve: A Back Door for Brain Hacking

Doctors stimulate a nerve in the neck to treat epilepsy, heart failure, stroke, arthritis, and a half dozen other ailments

A Lot Of Nerve: The Antidote To Modern Life — Vagus Nerve Stimulation

Vagus nerve stimulation (VNS) has already been approved for refractory epilepsy and depression. But the therapeutic reach of this cranial nerve covers a roster of stress-related maladies such as hypertension, insomnia, anxiety, obesity, and the destructive domain of inflammation.

The VNS Therapy System uses a surgically implanted medical device that delivers electrical pulsed signals to the vagus nerve in the left side of the neck. This therapy has proven effective in significantly reducing the number and/or intensity of seizures in many people suffering from epilepsy and has the potential for use in the treatment of other inadequately treated, chronic disorders.

Vagus nerve stimulation (VNS) sends regular, mild pulses of electrical energy to the brain via the vagus nerve, through a device that is similar to a pacemaker. There is no physical involvement of the brain in this surgery and patients cannot generally feel the pulses. It is important to keep in mind that VNS is a treatment option limited to select individuals with epilepsy or treatment-resistant depression.

Vagus nerve stimulation (VNS Therapy®) is designed to prevent seizures by sending regular, mild pulses of electrical energy to the brain via the vagus nerve. These pulses are supplied by a device something like a pacemaker.