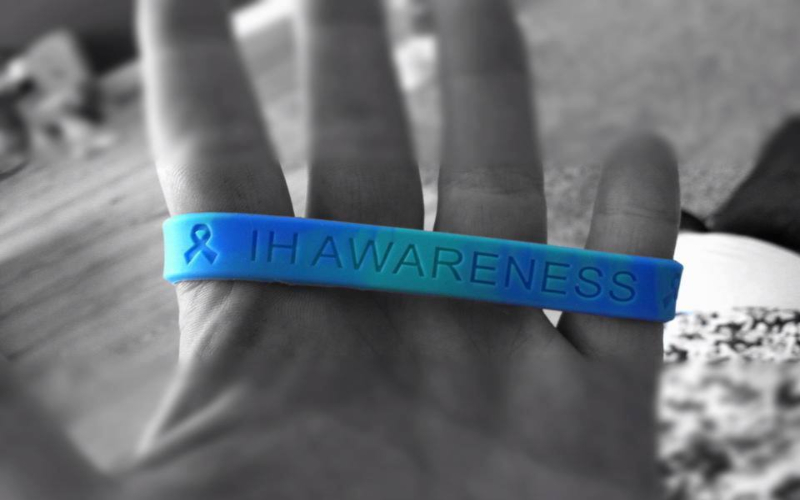 Imagine your head feels as though it's been crushed by a vice, a headache unlike anything you've ever felt before, where every part of your head hurts and the pressure is unbearable, and it's a pain no-one can see.

Imagine a world in permanent soft focus, where things come in twos, where things disappear momentarily, where you can't tell how deep a step is, where bright light is a pain you can't stand.

Imagine a world that sways around you, where you feel as though you're in the middle of a storm on a cross channel ferry, feeling dizzy and sick - yet you're standing still.

Excess hormones could cause a condition that can lead to blindness in women, study finds

Once regarded as rare, incidence of IIH is now rising dramatically in line with the global rise in obesity and there has been a 150 per cent rise in incidence in last 10 years. Currently there are very limited treatment options. Research led by the University of Birmingham has found that increased levels of hormones including testosterone could cause a brain condition that can lead to blindness in women.

As an IIH patient myself I was told this disease wasn’t genetic and it was an overweight females disease and is typically diagnosed during the childbearing years. Could they be more stereotypical? I feel that theory could be argued.

Roughly five years ago Jasmine felt differently and knew something was “off” about her “normal.” At first it started off like the flu. Headache, nausea, fatigue. Something most people would blow off because the flu is as common as a politician lying.

Idiopathic Intracranial Hypertension (IIH) is characterized by an elevation of intracranial pressure (ICP) with no identifiable cause [1]. Despite the fact that its aetiology remains largely unknown, the observations made in a significant number of recent clinical studies and the resulting increase in the understanding of its clinical picture have led to modifications in its diagnostic classification and provide the basis for evidence-based treatment strategies.

This is a consensus document to provide practical information for best practice in uniform investigation and treatment strategies based on current literature and opinion from a specialist interest group (SIG) for adult idiopathic intracranial hypertension (IIH). This should increase awareness of IIH among clinicians and improve outcomes for patients.

While ultrasound cannot currently replace LP (opening pressure) for diagnosis, it is a noninvasive tool to assess for possible increased ICP.

Standardization of the diagnostic process for idiopathic intracranial hypertension (IIH)

In light of a recent consensus article on idiopathic intracranial hypertension (IIH) published in The Journal of Headache and Pain, we spoke to the corresponding authors, Jan Hoffmann and Alex Sinclair. They gave us insights into the main findings of the article, how they aim to help patients with idiopathic intracranial hypertension, and why this disease is so important to study.

Idiopathic intracranial hypertension (IIH) is a disorder of elevated intracranial pressure of unknown cause occurring predominantly in young women of childbearing age. The typical patient symptom profile is the presence of daily headache, pulse synchronous tinnitus, transient visual obscurations and papilledema with its associated visual loss.

Beth Nguyen says that doctors dismissed her concerns on four separate occasions and failed to diagnose a fatal disease. Now the dying ER nurse is lashing out at doctors who ignored her pleas for treatment on four separate occasions. As the nurse was unknowingly dying from a fatal disease of the spine, doctors were downplaying her symptoms as “stress-related” instead of looking for answers.

Idiopathic intracranial hypertension (IIH) is a rare but important disease associated with significant morbidity. There is an expected rise in prevalence in line with the escalating global burden of obesity. Modern revisions in the terminology and diagnostic criteria for IIH help guide clinicians in investigations and researchers in standardising recruitment criteria for clinical trials.

From Frustration to Foundation: A Story of Hope for a Young Girl Battling Intracranial Hypertension

IH is such a rare disease – one person in 100,000 has it – that many medical professionals are not up to speed on its symptoms and occurrences. So, too often, it is either misdiagnosed as chronic migraines or not diagnosed at all. Left untreated, IH can cause blindness due to the excess pressure on the optic nerves. But there is no cure, and the available treatments are unreliable.

Paralleling the global rise of obesity, idiopathic intracranial hypertension (IIH) incidence is dramatically rising.1 However, IIH is still defined as elevated intracranial pressure (ICP) with no distinguishable etiology. Moreover, controversy regarding pathogenesis continues; IIH can be misdiagnosed as migraine, which is a far more common disorder, resulting in delayed diagnosis and the potential for permanent neurologic deficits, including blindness.

“Jessica’s story serves as a reminder that an eye test is a valuable health check for everyone, no matter what your age.

If you've just been diagnosed with IIH reading some people's accounts of their experiences with IIH will probably worry you. Please do remember that many people respond well to medication and undertaking weight loss if recommended. These people are able to resume their normal life and do not require support. We felt it was important though to recognise that some people do have severe problems with IIH. The emotional as well as the physical effects of IIH can be very traumatic. Many people with IIH say that although IIH alone isn't life threatening, it is life changing and the effects can impact on every aspect of their life.

Also known as pseudotumor cerebri, IIH is a disorder characterized by signs of increased intracranial pressure (headaches, vision loss, and papilledema) with no other cause detected on neuroimaging or other evaluations. Typically idiopathic due to impaired CSF absorption. Associated with oral contraceptives, vitamin A, tetracyclines, lithium, thyroid disorders.

Do you need a high opening pressure to diagnose IIH? Yes and no, IIH is diagnosed with the Dandy criteria...

Headache is the main complaint (naturally), but IIH can be diagnosed without headaches (papilledema found on exam in asymptomatic patient).

Just A Mom Trying To Raise Her Kids While Fighting An Incurable Disease And Raising Awareness Along The Way. This will be my release and a way to tell my journey. I like to think that if the positive energy I do have can reach one person, then I’ve accomplished a goal in life. Another goal of mine is to bring awareness to the disease I’m fighting. I want to make it known and recognized globally. I will succeed.

IIH Support and IIH UK Raising Awareness of IIH. Supporting sufferers and all those who care for them.

We promote, encourage and facilitate progress in the understanding and management of chronic idiopathic and secondary intracranial hypertension (IH). For patients, we provide a support system, educational programs and communication tools. For physicians and scientists, we sponsor research in basic and clinical sciences, education, training and patient care programs in the U.S. and worldwide.

If you need some support or just want to express yourself about this condition, I encourage this! I also want to spread awareness so others can be informed and understand more about my daily struggles. I live everyday with this condition.

My struggle with Intracranial Hypertension

Probably more than you ever wanted to know about me...Most people with chronic IH experience three characteristic symptoms: severe headache; visual changes due to swollen optic nerves (papilledema); and a whooshing noise in one or both ears that is correlated with the pulse (pulse-synchronous tinnitus).

Sometimes the condition disappears on its own within 6 months. Symptoms can return in some people. A small number of people have symptoms that slowly get worse and lead to blindness.

For decades, acetazolamide has been the drug of choice for treating IIH, but with little evidence that it helped and no established usage guidelines.

Acute IH occurs when the condition comes on rapidly – for example, as the result of a severe head injury, stroke or brain abscess. Acute IH is fatal if it's not treated promptly as a medical emergency – you will need to be admitted to hospital straight away. This page focuses on chronic IH – a severe, lifelong condition, usually caused by an underlying disease. Emergency treatment may also be required if chronic IH is caused by a build-up of fluid in the brain or a brain tumour.

ymptoms of IIH may include severe headache, nausea and vomiting, altered vision, and pulsating sounds within the head. A person with IIH may also have symptoms such as a stiff neck, back or arm pain, eye pain, and memory problems. If the condition remains untreated, permanent visual loss or blindness may develop.

IIH is also known as benign intracranial hypertension. However, this name is not being used as much now. This is because the condition isn't harmless (benign). It can cause some quite disabling symptoms and can lead to loss of vision if it is not treated. Another old name is 'pseudotumour cerebri' as it can lead to some signs and symptoms of a brain tumour, without a brain tumour actually being present.