Where in health am I? : Home / Health Cloud / StaynHealthy / Cosmetic Surgery / Rhinoplasty 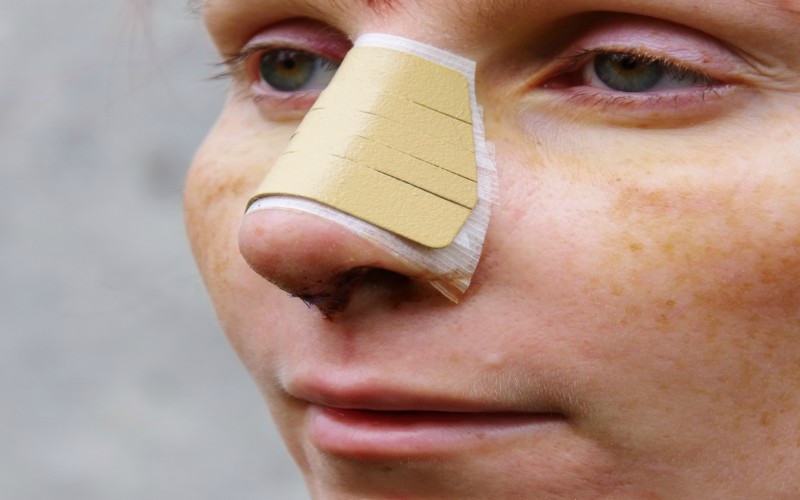 The Right Nose for the Face, or Adventures in Rhinoplasty

Rhinoplasty, commonly known as a “nose job,” is not just a 20th-century cosmetic procedure. In fact, the earliest rhinoplasty was recorded in ancient India, by anAyurvedic physician Sushruta (c800 BC), who described the necessity for reconstruction of the nose due to the mutilation of a criminal’s face, religious, political or military punishment.

From the rudimentary beginnings, Rhinoplasty has evolved from strictly a repair procedure, which was perfected by an English physician, Joseph Constantine Carpue. His technique is now referred to as “Carpue’s Operation.” It involved using a flap of skin taken from the forehead and placed over the nose to reshape or repair damaged cartilage.

Scientists May Have Developed A Five-Minute Nose Job

Rhinoplasty may soon go the way of the dodo, as a team of scientists from the University of California have discovered a potential five-minute, non-surgical nose job. According to BBC News, scientists discovered that the secret is using an electric current to temporarily soften cartilage into a malleable form. Called electromechanical reshaping, or EMR, the process would be done under local anesthetic and works by inserting multiple small needles into cartilage to conduct a current.

What may be even more appealing about the non-surgical rhinoplasty procedure, however, is that it only takes five minutes. You can do it on your lunch break and head back to work afterwards, grabbing a sandwich along the way. A lot of people do, in fact.

Liquid Nose Jobs: Everything To Know About Nonsurgical Rhinoplasty

The rhinoplasty's telling beak of bandages was once a badge of honor, but today, an imperfect nose is the real symbol of self-possession.

The Psychological Reason Why People Get Nose Jobs

Every person pursuing a nose job comes to their doctor with a different rationale. Some have real difficulty breathing through their nose, whether they were born with a wonky nasal passage or those passages were made wonky by a baseball that collided with their sniffer on the playground years ago. Others are straightforward that their goal is to make themselves more attractive.

The “Nose Job” Takes a Giant Leap in New Technology

All that pounding has given way to a much gentler procedure now called Piezo technique which initially was used in the dental practice.

Why are fewer and fewer Americans fixing their noses?

What might explain the overall decline in nose jobs, even as breast implants and tummy tucks are more popular than ever before?

The closer your phone is to your face, the more it distorts your nose.

A Comedic Look at Plastic Surgery

A new documentary, ‘Take My Nose…Please,’ explores why looks matter, the ethics of altering one’s appearance and whether a new nose is worth it.

How the All-American Nose Job Got a Makeover

From the first recorded nose job onward, surgeons have taken note of the psychological effect of altering the nose. The modern nose job was created by a German Jewish surgeon, Jacques Joseph, in Berlin at the turn of the 20th century.

How Young Is Too Young to Have a Nose Job and Breast Implants?

Wanting to look like a celebrity is not a healthy motivation. Nor is a desire to relieve some deep-rooted psychological problem,

Love the One You’re (Born) With

BUT really, I’ve avoided rhinoplasty because though it might make me prettier (and I do believe my nose is what stands in the way of my being conventionally pretty), I’m not sure what it will say about me.

My Week Of Hell: What It's REALLY Like To Recover From A Nose Job

Plastic surgery is everywhere these days, but do you know what it's really like?

Sculpting Identity: A History of the Nose Job

For centuries, people have used nasal surgery to protect, or improve, their place in society. An Object Lesson.

Some Nose-Job Patients May Have Mental Illness

Many people who complain about the size or shape of their noses show signs of mental illness, a new study suggests. About one in three people seeking rhinoplasty — commonly called a nose job — have signs of body dysmorphic disorder, a mental health condition in which a person has an unnatural preoccupation with slight or imagined defects in appearance.

A gorgeous two page spread from the November 1937 issue of Popular Science, quickly explaining exactly how easy a Depression-era rhinoplasty was to perform.

The Right Nose for the Face, or Adventures in Rhinoplasty

As the number one cosmetic procedure, rhinoplasty is considered the most challenging.

When I was researching nose jobs myself, most of the information I found about the recovery was on the websites of plastic surgeons. There is not a lot of firsthand information out there from people who have actually gone through with it. I don't know anyone personally who has had rhinoplasty, or I would have certainly asked them for their insight. That is my intention for this blog- to be that experienced friend. These are my thoughts in the days leading up to my surgery, and I plan on posting pictures and blogging about my recovery progress afterward.

Dr. Paul Chasan is nationally known for his breast surgery and facial rejuvenation work, including breast augmentation and rhinoplasty, all of which are performed in his cosmetic surgery center. Dr. Paul Chasan’s extensive education and experience allow him to confidently perform a number of sophisticated procedures for the face, body and breast.