Where in health am I? : Home / Health Cloud / StaynHealthy / Drink / Dairy / Kefir 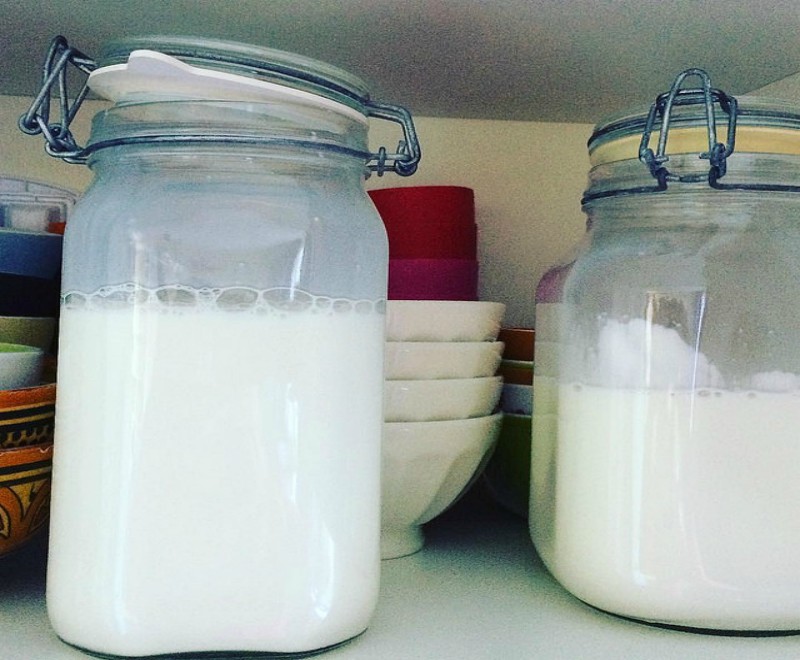 Once upon a time, I was a slender seventeen-year-old who decided to spend a year in a seaside Crimean town on a student exchange. Given the local emphasis on nonprocessed food, I planned on maintaining my relatively healthy diet from the States—and suspected that maybe it would even improve. But that quickly changed the moment I landed.

Everyday, I ate as if I was preparing for an imminent famine: For breakfast, my Russian host grandmother fed me a stack of thin pancakes smothered in sour cream and honey; for lunch, I indulged in street pies stuffed with meat or jelly, while my nights were spent double-fisting saccharine-fueled drinks from a can. By month three, I couldn’t fit into my pants. I was exhausted, breaking out, and bloated. How could the buttons be popping off my clothes in a country where my classmates were naturally wisp-thin?

Finally, I asked my host mother for help. Her prescription? Two daily glasses of kefir—a bitter-tasting yogurt milk drink that she claimed would subside any late-night cravings, and simultaneously help me squeeze back into my jeans. I did some basic research—the fermented drink was a staple in all of the post-Soviet countries and originally hailed from the Caucasus region. It dotted every health section of Russian women’s magazines with diagrams of intestines and mentions of bacteria and probiotics. My best friend Tanya swore by it, my host father gulped it, and it was just as common as milk in the grocery store. I started drinking it—and it helped. I no longer crammed my face with fried cheese curd patties on late nights, and didn’t feel as puffy on a day-to-day basis.

There was something about kefir that worked for me—and still does, though, now in my twenties and living in a Russian-speaking enclave of Queens, I simply drink it out of habit—heading to the local minimart with my Belarusian roommate to pick up liters of it on a regular basis.

Apparently I’m not the only one who is reaching for a bottle. Recently, the healthy snack has been turning up everywhere from cafés like Brooklyn’s Sun In Bloom to the shelves of local organic California grocers. It’s at Whole Foods in flavors from pomegranate blueberry to vanilla, and, more recently, it’s even been spotted in the form of coconut milk and water.

So why the sudden embrace of the drink stateside? It comes down to the fact that kefir is a probiotic, which means that it contains plenty of “good” bacteria and yeasts that are necessary for the health of the gut. “It’s nourishing to the digestive system,” says the Vancouver-based nutritionist Mikaela Reuben. In general, as Americans, she explains, “we eat a lot of processed, radiated food that has lost its natural bacteria. Kefir helps give [an immunity boost]. It’s also high in protein, so it adds a lot of benefit in the day.”

As for my Russian mother’s claim that kefir relieves bloating, and can stabilize weight? It’s not so far off. “Your weight is hugely affected by how healthy your digestive system is. Kefir is good for your intestines, which leads to the decreasing of the ailments like bloating,” explains Reuben. And though it is a dairy product, it’s not strictly off-limits for those who are mildly lactose intolerant. “The bacteria eats the lactose, so for people that are lactose intolerant, it’s easier for them to digest,” says Reuben. Those who struggle with dairy, she adds, could try drinking it “in a nondairy form in cultured coconut water or coconut milk.”

As for when to drink kefir? “It’s a good thing to have at the beginning of the day, so you start off with a dose of probiotics and can digest everything well afterward,” she says, adding that for those who don’t have time for breakfast, it can coat the stomach with a protective layer—especially if you plan on reaching for coffee on an empty stomach. “It also works as an evening snack,” says Reuben, who adds that “a small glass to curb hunger is better than reaching for cheese or crackers at 9:00 p.m.” Kefir twice a day? Sounds like my Russian host mother was onto something.

Source: Liana Satenstein, Is Kefir the Next Superfood? Introducing the Healthy Snack of Your Future, Vogue, April 8, 2015.

Is kefir your next superfood?

This newly popularized dairy drink has healing properties that leave consumers with flat bellies, flawless faces and happy lives — or so experts say.

Is Water Kefir as Beneficial as Milk Kefir?

Milk kefir, made with either dairy milk or coconut milk, far surpasses water kefir in probiotic potency. The benefits of milk based kefir exceed those of water kefir no matter if the water kefir is cultured with fruit juice, vegetable juice, coconut water, or filtered water and a whole sweetener.

A large proportion of the studies that support these findings were conducted in vitro or in animal models. However, there is a need for systematic clinical trials to better understand the effects of regular use of kefir as part of a diet, and for their effect on preventing diseases.

So THAT’S Why Everyone’s Drinking Kefir

Kefir might not be as trendy as chia seeds or quinoa, but it’s making a stir in the health food scene. This fermented milk drink, which hails from Eastern Europe, is often likened to drinkable yogurt in taste and health benefits. It’s mildly sweet and tangy and is a probiotic powerhouse. Some even say that kefir has more to offer health-wise than yogurt.

Living in the American “antibacterial” culture, where hand sanitizer is only an arm’s length away, it may seem like suicide for people to knowingly eat foods or drink beverages filled with microorganisms. However, nothing could be further from the truth! The key to understanding this is to learn a little bit about your gut.

Is kefir the trendy new health drink in town?

Kefir Benefits: 12 Things To Know About This Yogurt-Like Food

You probably already know about the health benefits of yogurt, but did you know you can get them in a drink as well? Like yogurt, kefir is a cultured milk product with a tart and even sour taste, but the two foods have some differences as well.

Kefir vs Yogurt - Is Kefir Always Superior to Yogurt?

No, not always. However, only in two circumstance that yogurt may be better than kefir. They are : 1. A commercially produced low fat flavored kefir will lose to a homemade yogurt. Especially if the kefir has been pasteurized after the fermentation process. Pasteuerisation after fermentation will kill whatever beneficial live strains there may be in kefir. Furthermore, low fat flavored means the addition of sweeteners which may be unhealthy as well. 2. If you know specifically what strains of bacteria you want, you may be able to find it in yogurt which may not be present in kefir.

Kefir's good but may not merit a halo

A tangy, sour, fermented milk drink may not sound like a likely candidate to move from health food stores to mainstream supermarkets, but that's exactly what kefir has done. The beverage is steadily gaining fans convinced of the health benefits -- proponents tout its purported ability to help cure cancer, reduce high cholesterol and treat high blood pressure -- yet the scientific studies to support the claims are still few.

Kefir: A Wonder Beverage from the Ancient World

Kefir has been consumed in the Caucasus Mountains for thousands of years, according to archeological evidence, and was considered a gift from God (Allah) by the Muslim people who lived there. It is said that the Prophet Mohammed personally blessed the kefir “grains,” but warned that if the grains or recipe were given away the beverage would lose its power. Families passed down their prized kefir grains (the microbial bodies that ferment the milk into kefir) to their children.

Kombucha and Kefirs: Hype or Healthy?

With so many “functional” beverages out there today, one should wonder if they provide actual health benefits or are just good tasting and look cool. When it comes to fermented beverages like kombucha and kefirs, the good news is that many of them actually live up to their popularity and hype.

For anyone trying to give up sweets and sugar, this fermented food is a must - and you'll get a great night's sleep as well.

I am very excited about making my own kefir and how positively it reacted with my body. I think the bacteria probably help break down the lactose protein which causes us to react badly to milk. I don’t know but I know I didn’t have the usual reaction I get from milk products!

The Link Between Homemade Kefir and Your Immune System

Over the years, the “good feeling” that comes with drinking kefir has been validated by science—kefir is more than a tasty and tangy beverage. It is a traditional, living superfood that can radically contribute to overall health.

What is Kefir and Why Is It So Good for You?

Kefir is all the rage in the natural health community. It is high in nutrients and probiotics, and is incredibly beneficial for digestion and gut health. Many people consider it to be a healthier and more powerful version of yogurt.

Is Kefir the Next Superfood? Introducing the Healthy Snack of Your Future

Apparently I’m not the only one who is reaching for a bottle. Recently, the healthy snack has been turning up everywhere from cafés like Brooklyn’s Sun In Bloom to the shelves of local organic California grocers.

The ancient antidote for medical maladies.

I believe you will find this site a simple, useful and resourceful kefir site to help you enjoy making and drinking kefir for the betterment of your health and of those you love.