Where in health am I? : Home / Health Cloud / StaynHealthy / Drink / Dairy / Yogurt 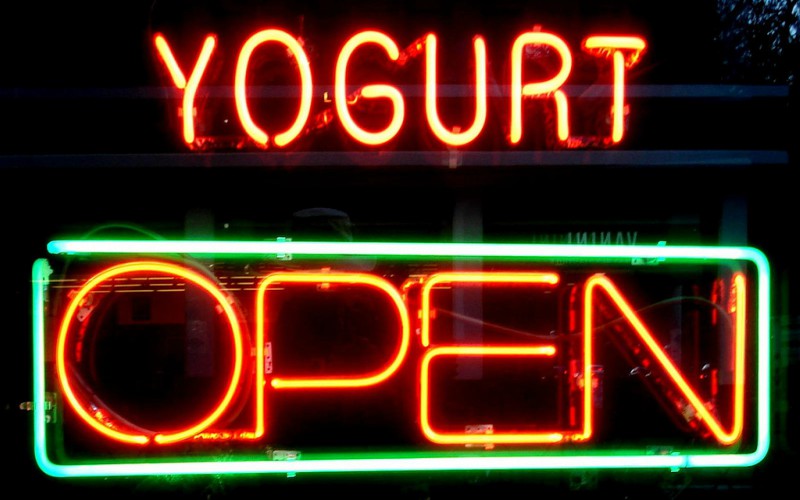 Yogurt is produced using the bacterial fermentation of milk. Apparently, bacteria can be healthy. If only the same could be said for the bacteria in our drinking water. Or the rat head I found in my Mountain Dew.

Yogurt has become the hip new trend, surpassing even man buns, genital tats, and pretending to enjoy Coachella. Gone are the days where a supermarket shelf limited itself to basic flavors of Dannon yogurt. Today, even the most blue-collar supermarkets carry elite, fashionable brands such as Fage and Noosa and Siggi and Trump. And each company offers so many non-traditional flavors. Yoplait, for example, has dozens of yogurt options, including Triple Berry Torte, Chocolate Cherry Cupcake, and Blackberry Pomegranate. (my three favorite rap artists, coincidentally)

Probiotic yogurt is very popular. You’ve probably seen the Activia commercials, in which Jamie Lee Curtis harasses strangers at the supermarket and asks them about their bowel movements. Probiotic yogurt includes extra beneficial bacteria — like L. Blugaricus and S. Thermophilus and the mighty Hercules — to help regulate one’s digestive system. Basically, the way the science works is that you consume yogurt, releasing an army of tiny microscopic animals into your stomach entrails, where it does battle with a squadron of stomachache-causing little demons. I’m currently working on the screenplay for Pixar.

Greek yogurt has been dominating store shelves lately. The Greeks are unable to control their nation’s unstable economy, creating financial chaos around the world, but at least they know how to make a thick creamy yogurt with over ten grams of protein per container. Chobani, Voskos, and Dannon’s Oikos are among the best-selling brands. None of these products are made in Greece. They’re American. But an ethnic-sounding word adds to the authenticity of what you’re selling. Take, for example, Kardashian. Would anyone have bought a leaked sex tape starring Kim Jones? Or maybe that’s a bad example.

Some yogurts are blended, which means the flavor is in the yogurt itself. But sometimes the fruit is on the bottom. Yeah, like I have time to scoop the bottom of the container and mix it in with the yogurt. News flash, Millennials; some of us work for a living.

Yogurt used to be sold with solid plastic caps covering the top of the containers. But now, most yogurt is sold with a flimsy aluminum foil top that you peel off. This is better for the environment, although leading Republican scientists are still not convinced that more waste creates more waste. Nevertheless, this packaging does tend to create more moments of getting home and unpacking your shopping bags to discover “Why are my groceries all wet and slimy? What is... oh, crap.” Sometimes the foil rips open.

Yogurt is a strange word. In Latin, I believe it means “I’m hungry and there’s nothing else in the fridge.” If you stare at the word for a minute, it starts to look kind of strange. When writing Rocky, if Sylvester Stallone named his love interest character Gertie, it would’ve put a different spin on the classic line. “Yo, Gert!”

If yogurt disappeared tomorrow, we’d get by. And, yet, I think we’d miss it... not every day, not even every month. But every once in a rare while we’d look into the sky, ponder the meaning of life, and think, “You know what? I could go for some yogurt right now.” So next time you’re eating a yogurt, appreciate the experience. And tell your yogurt thank you for making our time on this planet just a tad bit better. But not out loud, of course. That would make you a crazy person.

A Probiotic That Actually Lasts

The bacteria in yogurts have largely failed to live up to their hyped health benefits, but there are other microbes that might.

Sales of whole milk are growing; ‘People have been dieting for a long time’

All yogurts are not equal. Flavor varies greatly according to the seasons.

Greek Yogurt: All the Cool Kids Are Doing It

A god among mid-morning snacks, Greek yogurt has taken over The Atlantic offices. In the interest of our colleagues' health, we take a closer look at modern yogurt culture. Yes, culture.

For this recipe in my village in Greece we used a good, thick sheep’s milk yogurt, which is not always easy to find. Rather than using a whole-milk Greek yogurt making your own yogurt is a better alternative. It won’t taste like a sheep’s milk yogurt, of course, but it will be thick and rich flavored, two very important elements in Greek cooking.

How Did Greek Yogurt Get So Popular?

The mystery isn't "why greek yogurt," but why now? Just five years ago, Greek yogurt was a $60 million market in the U.S. (Too sour! Too thick!) But sales have increased 2500%, accelerating through the Great Recession despite the fact that the "Greek" stuff (it's actually more Lebanese, but anyway) tends to be twice as expensive as normal yogurt.

How to Make Yogurt at Home

Yogurt making turned out to be so simple that it’s become part of my weekly routine. I can throw together a batch in the morning while I’m drinking my tea, and it’s ready that same night.

Is Yogurt Good for You?

The more worrisome question, though, is what happens if a random mix of probiotics starts showing up all over our diets, making it hard to calibrate how much we're getting, and of what.

A new study examines the probiotic dosages of more than 100 foods.

New York's Boom in Yogurt Is Not So Sweet

Nobody's Really Sure Whether Yogurt Is Good For You

Americans are eating more yogurt than ever. The only problem: it's still unclear whether yogurt actually has any of the health benefits people say it does.

It's crowding out classic flavors and others in the diary case: bye bye, margarine.

The Yogurt Brands We Just Can't Get Enough Of

Yogurt is amazing. It's a perfect blank canvas for breakfast (we love a good mix-in), makes a convenient mid-afternoon snack, and fleshes out our favorite savory dinners.

When Yogurt Affects the Brain

Gut bacteria play a role in mood and emotion. Are probiotics the key to a better antidepressant?

Grass-fed yogurt is a relatively new food in the U.S. marketplace, and grass feeding is a practice not yet familiar to all consumers. By definition, 100% grass-fed yogurt comes from cows who have grazed in pasture year-round rather than being fed a processed diet for much of their life.

Yogurt Has Been Around Forever, But Do We Really Know What It Is?

Some of us eat yogurt every morning, and most of us are aware that it’s a dairy product, but how many of us really know what yogurt is? Not many. That ends today, right here, with everything you ever needed to know about this healthy breakfast option.

Yogurt is Good for More Than Just Eating

Open your fridge and look around. It's there, hiding on the smaller shelves. Or maybe tucked away in one of the drawers. Eventually, you'll find it—a trusty container of yogurt. Whether it's Greek or whatever came before that (does anyone even remember?), that tiny little carton is something you can feel good about eating. But before you start shoveling copious amounts of it into your mouth, note that yogurt may be healing to the outside of your body, too.

We at Team Yogurt love good yogurt. And we know we’re not alone. Interest in cooking with store-bought yogurt, celebrating homemade yogurtmaking, and eating yogurt at all times of day has surged. At the same time, the worldwide yogurt market has scaled to teetering heights. With new products flooding store shelves, yogurt shops opening at a rapid clip, and a mounting global culinary sensibility, we yogurt enthusiasts deserve a friendly, trustworthy, resource-rich hub all our own. Welcome to Team Yogurt. We're glad you're here!