Where in health am I? : Home / Health Cloud / StaynHealthy / Drink / Tea / Kombucha 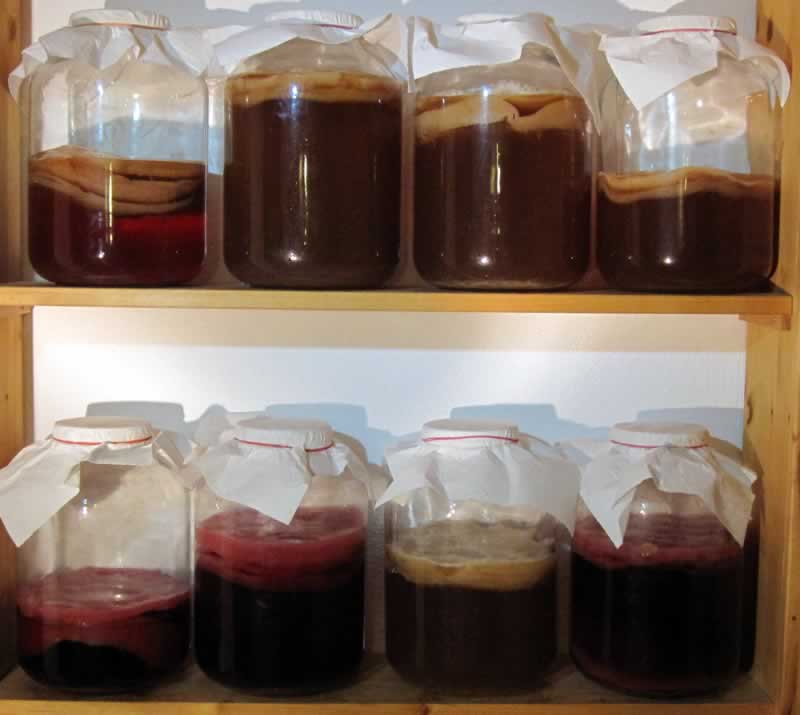 I was one of a dozen people who were undoubtedly screaming in their own heads as we waited for her to stop scrolling through Instagram long enough to pay for her groceries. She finally noticed that the cashier was waving his hands at her and pulled out a credit card. "Sorry," she said loudly, "But don't even talk to me until I've had my 'booch."

First, yes, she is the worst, and I sincerely hoped that she'd shatter her iPhone in the parking lot. Next, the booch she referred to is kombucha, the fermented tea that three of your friends have been drinking while you read this paragraph.

The Rising Trend of Booch Drinkers

A decade ago, kombucha was a fringe obsession for the yoga set (Slate, half-kidding, called it "the most liberal product in America") but now it's in the refrigerated sections of the most massive mass-market retailers. Last year, sales of kombucha increased by a whopping 37% in the United States, as everyone from your retirement-age in-laws to your lamest coworkers threw a bottle or two in their shopping carts.

Why? Probably because they've been sucked in by kombucha's reputation for being Good for You, and for the assortment of health claims that frequent booch-drinkers make about the sweet-and-sour tea.

But is it really good for you? It depends on who you ask — and what you're willing to believe. Kombucha has been touted as the key to gut health, an immune system booster, and a cancer treatment option, in addition to dozens of other claims. (Even kombucha brand GT's Living Foods credits the beverage with helping its founder's mother "miraculously" recover from breast cancer).

So, Is Kombucha Good for You?

"While there are a lot of very exciting-sounding health claims made about kombucha, the fact is that there's really no compelling evidence that kombucha is beneficial — at least in humans, since most if not all of the studies done on it were done with rodents," dietitian Abby Langer told The Kitchn. "Kombucha may contain antioxidants and probiotics, but we don't really know if the kombucha contains antioxidants and probiotics in large enough amounts, or in the right types, to really make any difference in your health."

If it does have any real health benefits, it could be related to those probiotics. Previous research has suggested that these good bacteria can play a role in overall gut health, provide digestive benefits, and potentially improve immune function. But — and this is a big but — most of those probiotics are found in raw or unpasteurized kombucha, because those good-but-delicate bacteria can't live through the pasteurization process. And raw or home-brewed kombucha has its own risks from bad bacteria and mold that can grow during the fermentation process.

Our guts already contain up to 500 different species of bacteria, adding up to more than 300 trillion-with-a-T microorganisms living rent-free in our intestines; dedicated probiotic supplements contain five bacterial species and 50 million microorganisms, and kombucha contains even fewer than that. And microbiologists told Tonic what Langer told us: that it's difficult to know which probiotics you're getting from any supplement and, with kombucha, the variety depends on the tea itself, on the fermentation process, and even how much time has elapsed since it was brewed.

So if you want the benefits of probiotics, it might be just as effective to eat some yogurt or take a concentrated probiotic supplement — but it's OK if you want to wash it down with kombucha too. "I would say that it's probably not going to change your life for the better if you drink it," Langer said. "I mean, if you like it, then continue to consume it. Just make sure you choose a low-sugar type, and be realistic with your expectations about how it's going to affect your health."

And maybe don't blame kombucha when you slow down an entire grocery store checkout line.

If you're drinking kombucha for your health, know this: Whatever miracle benefits you've heard about most likely came from a study in animals — if there was a study done at all. A 2019 report analyzed 310 studies about kombucha and found that only one had actually examined the effects of kombucha in human subjects. The rest were either conducted in animals or in vitro — outside a living organism usually in cells or cultures in a test tube or petri dish.

7 Reasons to Drink Kombucha Every Day

Most people experience great benefits drinking kombucha and have no negative side effects. However, there are possible interactions and side effect symptoms to be aware of, mostly in populations that already have weakened immune systems and digestive problems.

How Coconut Water and Kombucha Took Over the Corner Store

“There’s a seismic change happening in the beverage world, and companies like Coke and Pepsi are having a very hard time adjusting,” he told me. “Lots of people want healthier drinks, and there are more and more companies offering them.

Is Fermented Tea Making People Feel Enlightened Because of ... Alcohol?

The ethanol in kombucha has some regulators concerned about the popular microbial drink.

Kombucha appeals to me because it is much faster and easier to make than funky beers, in addition it has almost no sugar and less than .5% abv, so I can feel good drinking it whenever I want.

Kombucha 101: Demystifying The Past, Present And Future Of The Fermented Tea Drink

So how did this ancient Chinese beverage that is brewed with an unappetizing yeast disc become an artisanal beverage and an influential part of PepsiCo's brand portfolio in 2016?

Kombucha and Kefirs: Hype or Healthy?

With so many “functional” beverages out there today, one should wonder if they provide actual health benefits or are just good tasting and look cool. When it comes to fermented beverages like kombucha and kefirs, the good news is that many of them actually live up to their popularity and hype.

Kombucha Isn't Making You Any Healthier

Kombucha Tea: Is It Healthy?

As a health reporter, I've managed to find a place as something of a medical authority among my friends. (What can I say? In the land of English majors, the one-eyed man is king). I'm not a doctor, but it is my job to review medical information and check claims with leading researchers. So when friends ask me if kombucha is really good for you, I say with great confidence: I have no idea.

The flavored versions are unappealing and sometimes seems as if they’re trying to cover something up. So it’s amazing that I ever found out that homemade kombucha was my McDreamy of beverages.

The 10 Health Benefits of Kombucha

Kombucha is typically classified as a “functional beverage”, or a nonalcoholic beverage with supposed health benefits. These purported benefits are chronicled in the book Kombucha: The Miracle Fungus. From beneficial probiotics to gut health, we?ve listed 10 of the most intriguing alleged kombucha health benefits...

The kombucha craze: Here's what's behind the hype

Here's what you need to know about this fermented sweet tea.

The Mystery of Kombucha Culture

The fizzy, fermented tea is not the cure-all that its devotees want it to be, but it still might have health benefits.

There's Bad News for Hipsters Who Swear By Kombucha

Kombucha's supposed health benefits might be what's propelling the drink to the top, despite the fact that it grosses out a lot of people. Luckily, if the idea of drinking a fermented, clumpy tea for some kind of miracle cure sounds nauseating, we've got some news: You might be onto something.

What Is Kombucha and How Do the Health Claims Stack Up?

A closer look at this ancient drink once only found in hipster cafes.

What Is Kombucha, and What Tastes Good With It?

Not sure what foods to pair with kombucha? We have you covered.

What Kombucha Really Is, For Those Of You Who Drink It But Don’t Really Know

You might pick up a bottle when stopping in at Whole Foods, you might really love the slight effervescence and its sweet-tart flavor reminiscent of a green apple, but do you know what kombucha actually is? Considering the fact that kombucha has reached multi-million dollar industry level, it’s high time we all get to the bottom of what this drink is made of.

What’s the fuzz with Kombucha?

First of all, what is it? Kombucha is a fermented tea. It is made by preparing black or green tea, sweetening it and then adding microbes. These microbes come in the form of a SCOBY, which stands for Symbiotic Culture Of Bacteria and Yeast. Also more scientifically called a pellicle or more informally called a mother (lending itself to countless puns). It is a sort of gooey mixture of microbes in a cellulose network, it looks a bit foul. And, as you can imagine, there’s a whole lot of science mixed in there too!

Why I Stopped Drinking Kombucha

I didn't find a lot online but a few things I had read really resonated with me. Because kombucha is a fermented beverage it contains bacteria. This is a good thing as many of us have an imbalance of bacteria in our guts. Probiotics are very important and eating probiotic rich food is crucial for optimal health. With that being said, too much of the one kind of bacteria or yeast can be problematic. Because kombucha is fermented with yeast, it can potentially cause excess candida to grow in the body.

Why We Don't Drink Kombucha

There continues to be quite a buzz about the benefits of kombucha these days. While we agree that re-establishing a healthy gut flora is foundational for creating greater health, we believe that taking consideration of what form that microbial inoculation comes in would be wise.

Is Kombucha Actually Good for You?

So if you want the benefits of probiotics, it might be just as effective to eat some yogurt or take a concentrated probiotic supplement — but it's OK if you want to wash it down with kombucha too. "I would say that it's probably not going to change your life for the better if you drink it," Langer said. "I mean, if you like it, then continue to consume it. Just make sure you choose a low-sugar type, and be realistic with your expectations about how it's going to affect your health."

8 Things You Didn't Know About Kombucha

The #1 place online to learn about Kombucha Tea and buy Kombucha products.

Thea Kombucha Co. is a Denver, Colorado based biotech start-up that is revolutionizing the way kombucha tea enthusiasts make the effervescent probiotic drink at home.