Where in health am I? : Home / Health Cloud / StaynHealthy / Eat / Coconut Oil

Coconut is one of those love-hate ingredients - Marcus Samuelsson 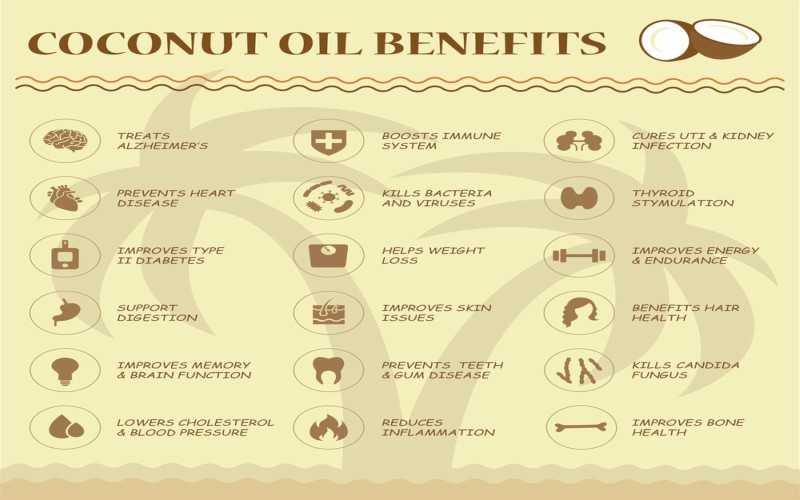 The Miraculous Benefits of Coconut Oil

Coconut oil changed my life, and also my genetic coding.

I had heard that coconut oil was a natural wonder, and I’m all for anything that doesn’t contain gluten, but I couldn’t have known how big an impact this little oil would have on me.

One night, while simultaneously drinking and bathing in a vat of coconut oil, I opened my eyes. What do you think happened? Coconut oil got in my eyes? Yes. Was it extremely painful? Yes, again. Did it also make my vision superhuman? You nailed it.

Within seconds, I was able to see three galaxies away to a planet named Gå4n! That is very, very far from Beacon, New York. A few dabs of coconut oil in my ears and I could hear the…

There Is Coconut Everywhere

If you feel like everything is starting to taste like a piña colada, it isn’t just you. Coconut is in everything. Packaged soups, baby foods and snack foods are made with coconut oil, flour and shavings. Gyms are stocking coconut water. For some, coconut oil is a substitute for butter on popcorn, and coffee shops are spooning it liberally in blended lattés.

Have We Been Delusional About Coconut Oil This Whole Time?

Surely you've heard by now that coconut oil is the secret of life. It fights viruses, reduces heart disease, promotes weight loss, and can be used as a butter substitute. Only it's not actually that healthy.

How Does Coconut Oil Affect Cholesterol?

Will the saturated fats in coconut oil raise your cholesterol? More to the point, does this matter?

Is Coconut Oil a Healthy Fat?

Coconut oil is high in saturated fatty acids...Coconut oil’s image has gotten a makeover in recent years, and many natural food stores stock the product. But despite “a lot of hype about it,” said Dr. Alice H. Lichtenstein, a Tufts University professor of nutrition science and policy who is vice chair of the federal government's dietary guidelines advisory committee, “there’s virtually no data to support the hype.”

Can coconut oil treat or prevent Alzheimer's disease? What are the benefits of coconut oil and MCTs for brain health?

Please Take A Deep Breath: Coconut Oil Is Not The Worst

Look, don't drink it by the gallon but also it's not all of a sudden poisonous. The significant takeaway from this study is less about the effects of coconut oil and more about correcting the misconception that coconut oil is a "health food." "We already know all of this...Coconut oil is a fat like all other fats; it's not a health food. It doesn't miraculously have some life-changing effect on our bodies..."

The Benefits Of Coconut Oil

If you believe everything you read on the Internet, coconut oil is a panacea, recommended for everything from frying your chicken to shaving your legs...But coconut oil is more than 90 per cent saturated fat, or about 11.8 grams per 15 millilitres (one tablespoon), compared to about 63 per cent or 7.2 grams for the same amount of butter. And saturated fat is generally considered to be a "bad" fat that increases overall cholesterol levels and specifically bad cholesterol. The reason this doesn't apply to coconut oil, say supporters, is that about half the saturated fat in the oil is medium-chain fatty acids, which are easier to digest than the more prevalent long-chain fatty acids in most other oils, including butter. While the scientific community doesn't disagree, it urges caution.

The World’s Coconuts Are in Danger

In this day and age, coconuts seem to be, somehow, everything at once. You can buy oil from coconuts—not to be confused with butter from coconuts—and flour and sugar and milk and aminos and vinegar from coconuts. The coconut market is booming. But the long-term outlook for coconuts? Not as good. In the Caribbean, bacteria that cause lethal yellowing are wiping out coconut trees...

Coconut oil has some 12 grams of saturated fat per tablespoon, compared with about seven grams for butter, according to the USDA's food-nutrient database. Studies, though, have found residents of South Pacific islands who eat a lot of coconut oil have very low levels of heart disease. Those studies can't be applied to Americans as Pacific Islanders are far more active on average and eat an entirely different diet, said George Blackburn, associate director of the Division of Nutrition at Harvard Medical School in Cambridge, Mass. Heart-wise, however, coconut oil is "better than butter" and other animal fats because it has no cholesterol, he adds.

Does coconut oil deserve a place in your pantry? This has been hotly debated since the American Heart Association recently released a report advising against the use of coconut oil, blaming the high level of saturated fat and “no known offsetting favorable effects” — or so they say. Before you say goodbye to coconut oil for good, let’s dive a little deeper into the American Heart Association’s statements to find out the real truth…

The Miraculous Benefits of Coconut Oil

Coconut oil changed my life, and also my genetic coding. I had heard that coconut oil was a natural wonder, and I’m all for anything that doesn’t contain gluten, but I couldn’t have known how big an impact this little oil would have on me. One night, while simultaneously drinking and bathing in a vat of coconut oil, I opened my eyes. What do you think happened? Coconut oil got in my eyes? Yes. Was it extremely painful? Yes, again. Did it also make my vision superhuman? You nailed it.