Where in health am I? : Home / Health Cloud / StaynHealthy / Eat / Diets / Anti-Inflammatory Diet 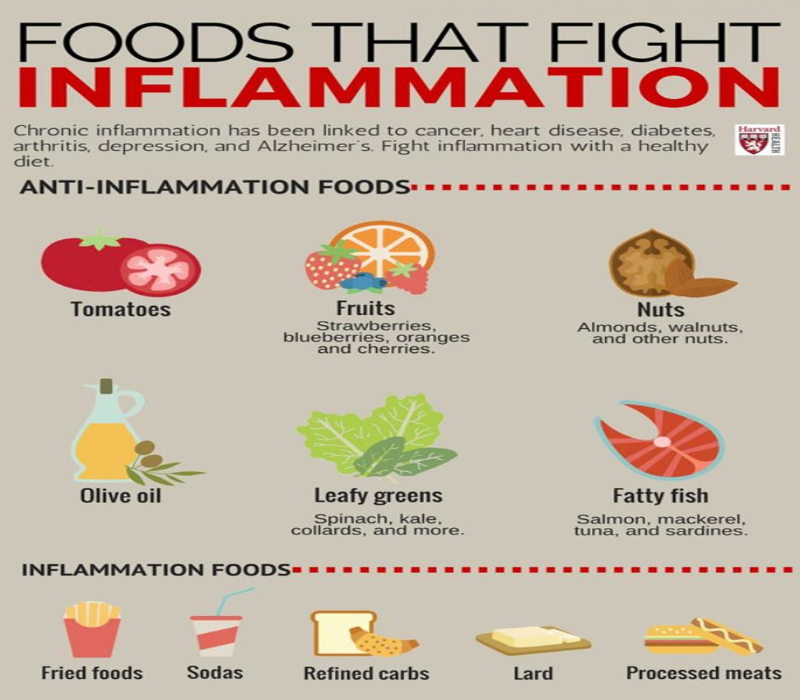 We all appreciate the elegance of simple solutions to complex problems. But we know too that simplicity can often masquerade as truth, hiding a more nuanced reality. Such is the case with inflammation, where pseudoscience, exaggerated claims, false promises, and dangerous oversimplification have dominated for too long. Here is a typical missive:

“Inflammation controls our lives. Have you or a loved one dealt with pain, obesity, ADD/ADHD, peripheral neuropathy, diabetes, heart disease, stroke, migraines, thyroid issues, dental issues, or cancer? If you answered yes to any of these disorders you are dealing with inflammation.”

Well, no, inflammation does not control our lives. Like many others, this author claims inflammation is responsible for a huge range of maladies, ranging from Alzheimer’s to lupus to stroke to fibromyalgia; I counted 30 on this site. As a biologist, and author of a book on diet and nutrition, I find this to be nothing but cringe-worthy. Yes, inflammation is terribly important, and as we will see, associated with disease.

But the oversimplification and weak link to biology that we find on sites like these are misdirection from understanding what is actually happening in our bodies. Such misunderstanding leads to odd nutritional or medical recommendations that are useless at best or dangerous at worst.

Dr. Wajahat Mehal has written an excellent lay-person-friendly overview of the latest in inflammation research that can be found in the most recent issue of Scientific American. I urge anybody making any claims about inflammation, or contemplating dietary or behavioral changes based on concern about it, to read this article.

Here is the crux of the problem. Yes, indeed, as Dr. Mehal notes, “inflammasomes are at the heart of a wide range of diseases and disorders.” But before we go nuts here, let’s take a deep breath. Often lost in conversation is the distinction between inflammation causing disease and the role of inflammation as a mechanism of disease progression arising from different pathologies. Be clear that “at the heart of” does not mean “causes.” This distinction is critical.

Cancer offers a good analogy. At some point, all cancers result when cells start dividing uncontrollably; but there are many causes of cancer leading to that cell condition. If we wish to avoid lung cancer, the answer is to stop smoking; this is a better strategy than looking for ways to interfere with the cellular mechanisms of malignancy, after we have set them on a path to malignancy with our unhealthy behavior.

The same applies to inflammation; yes, many disparate diseases have inflammation somewhere in their pathways, just as almost all cancers share a similar mechanism of cell physiology in taking the last step to malignancy. But that last step to uncontrolled growth is not the cause of cancer — what causes cancer is what leads eventually to that last step. Likewise, inflammation is not the cause of disease; it is a shared mechanism of disease progression following various assaults on our bodies, just as different cancers sharing comparable physiological processes are the consequence of being exposed to various carcinogens.

Exposure to asbestos fibers can cause mesothelioma; high levels of radiation can cause leukemia. Once we are exposed, both insults (if resulting in these very different cancers) ultimately lead to malignancy through similar cellular mechanisms. The same idea applies directly to inflammation. We know for example that serious overeating in one sitting can trigger inflammation: what we need to focus on is eating less, not inflammation. Fixating on inflammation misses the point, unless you are a researcher studying disease.

Inflammation is a legitimate and important target for research as we learn more about disease progression and means of combatting pathologies once initiated. For the rest of us, we need to avoid behaviors that promote ill health in general (which as a consequence will reduce inflammation and many other cellular mechanisms that ultimately lead to disease). Our goal is not to reduce inflammation to prevent disease any more than our goal is to stop phosphorylation in cells on the verge of malignancy as a means of preventing cancer; instead, we need to adopt habits do not result in disease in the first place. And this is where misinformation has run wild. We do ourselves a disservice by trying to attack the process of how a disease progresses rather than preventing the disease to begin with.

What drives me to distraction are false and unsubstantiated claims linking foods to inflammation. Have no doubt; eating can trigger an inflammatory response. That much is true. But not much of what else you read is. Here is what we know. We already mentioned that eating too much at one time can lead to acute inflammation, which will dissipate as the body metabolizes the meal. Habitually eating an excess of calories forcing the body to store the extra energy as fat can trigger chronic inflammation.

Evidence is growing that eating high concentrations of saturated fats can lead to an inflammatory response. We also know that the resulting inflammation from these assaults impacts a number of organs, and particularly the liver. We also know that overeating, obesity, high fat diets and other unhealthy eating habits can lead to diabetes, cancer, stroke, heart attack and host of other nasty problems, all of which involve inflammation in the progression of those diseases. But inflammation is not the problem; it is a step in the development of diseases that we generally set on course with unhealthy habits.

We also know that two things can reduce inflammation: fasting and exercise. These result in an increase in blood levels of beta-hydroxybutyrate and lactic acid; these chemicals through a complex series of biochemical reactions turn off genes involved in triggering the production of inflammasomes. Any other claims of foods that reduce inflammation are hype, and unproven.

That is what we know. And yet, we are bombarded with false or exaggerated claims in popular literature, websites and the blogosphere. Google any of these claims for citations:

“Ginger and turmeric have been shown to have anti-inflammatory properties.” I love ginger and turmeric, but there is scant epidemiology to support the claim. It is just wishful thinking and the kind of bogus claim that distracts us from reality.

“Excess sugar intake will contribute to inflammation. It’s not just the obvious sugar but also the hidden sugars.” There is no such thing as hidden sugars; and sugar itself has nothing to do with inflammation, other than adding calories, which in excess we know can cause inflammation.

“Phytochemicals - natural chemicals found in plant foods... are also believed to help reduce inflammation.” There is no evidence for this statement. Of course, eating plant rather than animal products would reduce saturated fat intake, which in excess can cause inflammation.

“Inflammation has also been linked to unbalanced levels of certain hormones, such as estrogen, progesterone, and testosterone. That’s why chronic inflammation often inflicts menopausal women, causing conditions like osteoporosis, weight gain, and adult acne.” This claim is not substantiated by any serious clinical research.

“Foods that combat inflammation include tomatoes, green leafy vegetables and nuts like almonds and walnuts.” Well, no, that is not true at all. These foods simply do not promote inflammation, which is not the same as combatting it. Avoiding rotten food is not the same thing as treating food poisoning.

These two examples are what are typically found on the web now; there are multiple dozens of similar claims screaming across the internet:

“Chronic inflammation is the root cause of many serious diseases.” No it is not; it is an important step, but one of many, in the progression of diseases generally caused by bad habits.

We have confused the cellular processes of disease development with the initial assaults that lead to these cellular processes. It is as if threw a ball at a friend’s head knowing that this will cause damage that we really do not want to cause; but we throw the ball anyway, and our solution then is to try to shoot down the ball in mid-flight before impact. Our priorities are misplaced.

I strongly support research into inflammation and its broad association with the progression of many diseases. This important and growing field of study will help us understand the many cellular mechanisms that lead to pathology. Surely, too, such research will identify targets for treatment, just as cancer research has helped identify cellular targets for attacking that disease.

The rest of us should stop focusing on inflammation; it is a distraction. Unless you are in the lab, inflammation is not something you should be concerned about any more than you care about the role of kinases in the development of cancer. We need to get our priorities straight. Forget inflammation and pay attention to what matters: eat healthy, eat little and exercise if you want to reduce the chance of suffering from the many diseases associated with bad diet.

Doctors are learning that one of the best ways to reduce inflammation lies not in the medicine cabinet, but in the refrigerator. By following an anti-inflammatory diet you can fight off inflammation for good.

Most "anti-inflammation" diets are overkill. Tom Brady's is a case in point.

According to his personal chef, New England Patriots quarterback Tom Brady eats a highly restrictive, plant-based diet that centers on what he deems "anti-inflammatory" foods. Other foods, chef Allen Campbell explains, are off the table...

Anti-Inflammatory Diet: What Is It And How Can It Help Everyone?

“In a nutshell, anti-inflammatory eating is about eating whole, unprocessed foods,” McLeod told HuffPost Australia. “It’s about eating a more plant-based diet, rather than eating lots of meat and processed foods. It’s about including healthy fats, herbs and spices, and also taking time and effort to prepare your food in a healthy way.”

Doctors are learning that one of the best ways to quell inflammation lies not in the medicine cabinet, but in the refrigerator.

Is There Proof That The Anti-Inflammatory Diet Works?

The good news is that by following an anti-inflammatory diet – focusing on phytonutrients in fruit and vegetables, and essential fatty acids and amino acids plentiful in everything from seeds to seafood – we are able to quench the flames of inflammation and turn on cell repair.

We all appreciate the elegance of simple solutions to complex problems. But we know too that simplicity can often masquerade as truth, hiding a more nuanced reality. Such is the case with inflammation, where pseudoscience, exaggerated claims, false promises, and dangerous oversimplification have dominated for too long.

Give your body the break it needs with anti-inflammatory foods rich in omega-3s and antioxidants.